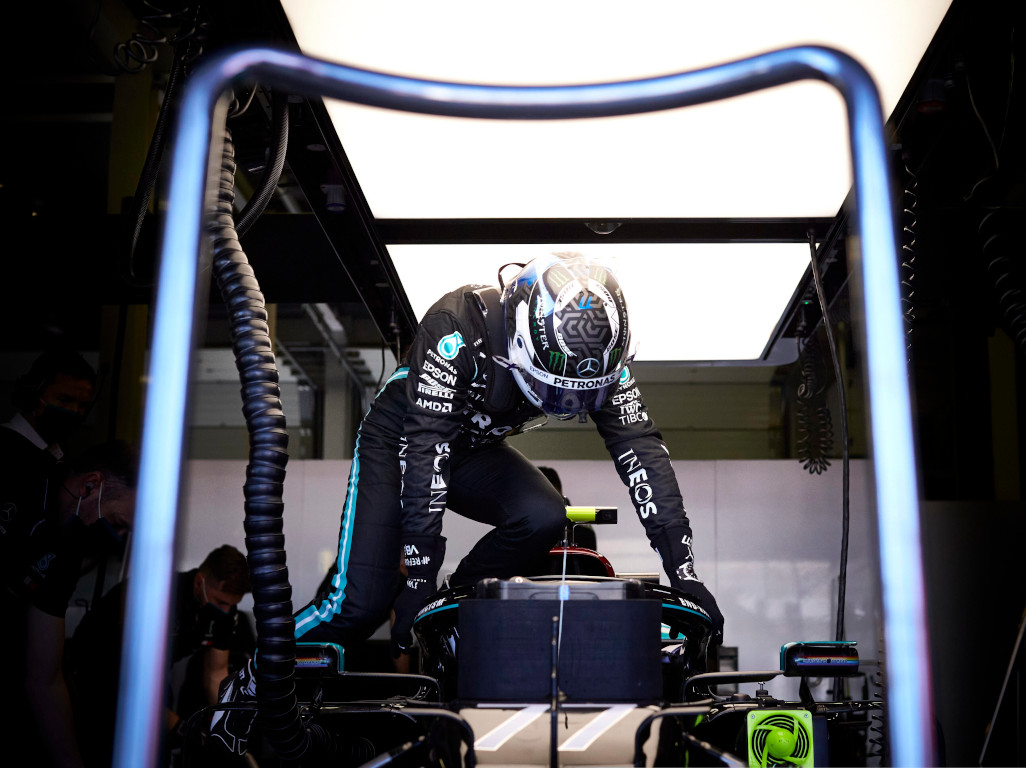 Valtteri Bottas is back on pole, this time for the 70th Anniversary GP, while Red Bull gambled in qualy with Max Verstappen, P4, starting on hard tyres.

Nico Hulkenberg will start from third on the grid as the Racing Point driver chases a first podium in what will be 178 starts.

Tyre choice, or better to say tyre wear, was the challenge in qualifying for the 70th Anniversary Grand Prix as the drivers not only tried to book the best grid slot possible, but those in Q2 also needed to set themselves up for the opening stint of the grand prix.

The situation was not helped by the blustery wind or the traffic.

Esteban Ocon and George Russell had a moment in Q1 with the Renault driver completely blocking the Williams man while he was on a hot lap. Russell had to slam on brakes with the stewards announcing that they will investigate. Ocon can expect a penalty.

“Ocon just massively got in my way,” said Russell. “Mate, that was mega dangerous.”

Ocon in turn told his team: “That wasn’t good, we’ll get penalised for that.”

Stewards are going to have a l👀k at this…

Russell, for the fourth race in a row, made it out of Q1 with Bottas and Lewis Hamilton taking the 1-2.

Those that didn’t, Daniil Kvyat, who had his last lap time was deleted for exceeding track limits, Kevin Magnussen, Nicholas Latifi, Antonio Giovinazzi and Kimi Raikkonen. Alfa Romeo has yet to get a car out of Q1 this seeason.

Q2, the session that determines the tyres that the drivers who make it into Q3 will use at the start of the race, threw up a few surprise tyre choices as Verstappen left the pits on a set of hard tyres. Everyone else went for mediums.

Verstappen’s first run on the hard tyres put him fifth fastest, less than a second behind pace-setter Bottas. Hulkenberg’s first attempt was a waste as he went mowing the lawn at Chapel and finished outside the top ten.

Might have put a wheel in the dust there. pic.twitter.com/ewIs9joaAW

Hulkenberg’s second run elevated him to second splitting the Mercedes drivers with Verstappen, on the hard tyres, ending the session in P9. He will be the only driver inside the top ten starting on the white Pirellis.

Vettel told Ferrari: “That was all I had, that was everything that was in this car. I’m trying. Thanks.”

Q3 again saw a split in tyre choices with Verstappen, Albon and Ricciardo all leaving the pits on the medium tyres for their first of two runs. The rest opted for the red Pirellis.

Hamilton put in a 1:25.284 to sit on provisional pole ahead of Bottas and Ricciardo. The Red Bull team-mates were fifth and sixth with Verstappen ahead of Albon. Hulkenberg, despite a small mistake at Chapel, was fourth.

Heading out for a second run, Hamilton swapped his softs for medium tyres as did Bottas. All in all seven went out on the yellow tyres for their second run.

“A second clear again are we? What a shame…” #F1 pic.twitter.com/VKWPVhSbol

Verstappen, who will start on the hard tyres, was fourth ahead of Ricciardo, Stroll, Gasly and Leclerc. Albon and Norris completed the top ten.