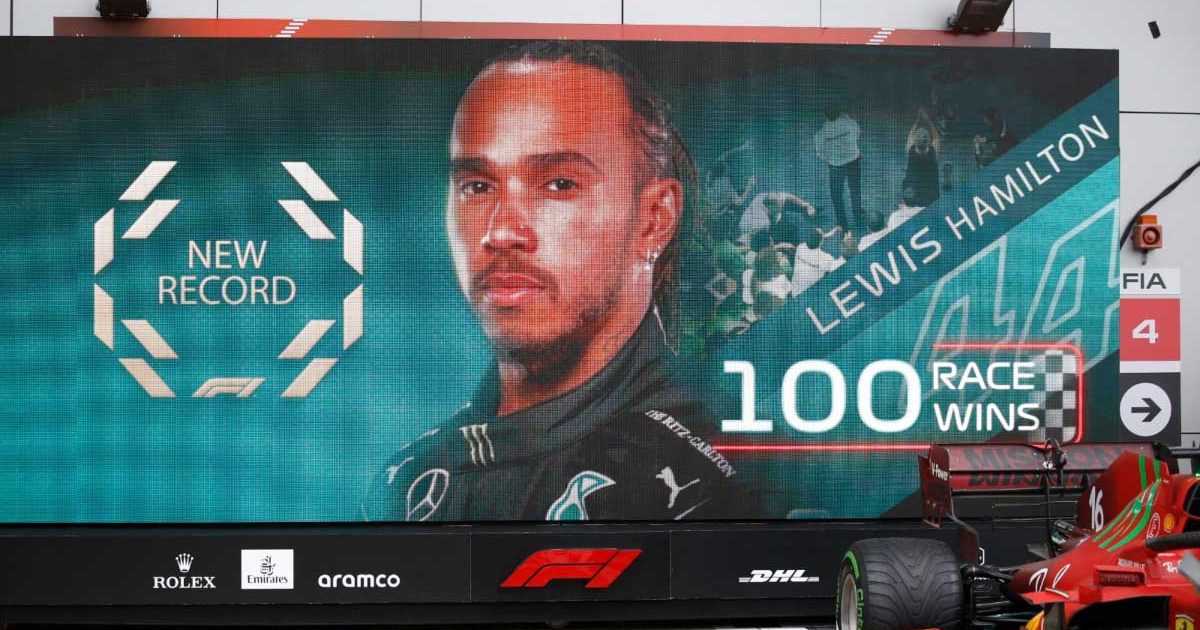 Lewis Hamilton was made to work for his 100th grand prix win, taking the chequered flag as the rain came down at the Russian GP with Max Verstappen P2.

On a day when it looked as if pole sitter Lando Norris would pull off his maiden grand prix win, rain in the final ten laps caused chaos with Norris gambling on staying out, and Hamilton pitting.

The Mercedes pit wall’s call paid off, Hamilton taking the lead as Norris once again slid off the track. Hamilton raced to the win, 53 seconds ahead of Verstappen.

Although the Red Bull driver started P20, he was running seventh when the rain came down and his early stop for inters saw him grab second place on the day. The gap between the two is now two points in Hamilton’s favour.

Lando Norris, Carlos Sainz, George Russell made up the first three places on the grid, with championship hopeful Lewis Hamilton P4 and Max Verstappen P20. Norris made a good start but as the tow came into effect, Russell pulled up alongside Sainz and then Sainz edged Norris to take the lead ahead of the McLaren driver.

Russell stayed third as Daniel Ricciardo took the fight to Lewis Hamilton, the Brit also swamped by Lance Stroll with Fernando Alonso, despite straight-lining the corner, also taking a position off the Mercedes driver. End of lap 1 it was Sainz, Norris, Russell, Stroll, Ricciardo, Alonso and Hamilton. Verstappen was P17.

Hamilton made short work of Alonso, up to sixth, Verstappen took 15th off Nikita Mazepin to sit right behind Valtteri Bottas, who had a tactical engine change that, it was rumoured, was done to try hold up Verstappen’s recovery.

With five Mercedes-powered cars in the top six, Russell began to drop off the back of Norris’ as the McLaren driver stuck with Sainz, with Stroll, Ricciardo and Hamilton forming a train behind the Williams as Sergio Perez running P7 ahead of Alonso, Esteban Ocon and Kimi Raikkonen. Perez and Alonso the only two in the top ten on the hard Pirellis.

Verstappen was up to P14 on lap 6 having cleared Bottas, too easy up the inside at the end of the back straight. He overtook Pierre Gasly two laps later, then Charles Leclerc – the latter nearly ending in the barrier as the Ferrari driver was making a move on Sebastian Vettel at the same time and almost touched Verstappen’s front wing. Vettel was his next target, P11 for the Red Bull driver on lap 13.

A great move from Verstappen on Bottas

The Dutchman eases past the Finn and is up to P14 #RussianGP #F1 pic.twitter.com/tV097xrHRU

Back at the front, Norris caught up to the back of Sainz’s Ferrari, the Spaniard having been told “plus 3” earlier driving more conservatively than he probably wanted. “I need to start pushing, I think,” said Sainz as Norris took a look.

A second pop saw Sainz put on a great display of defensive driving as he held the line through Turns 2-3 and kept him away at Turn 4. Norris dropped off, telling McLaren his front left was almost “completely gone”… and then attacked for the lead down the back straight, taking it with the help of DRS. “Got him!”

Stroll was the first of the top ten, in fact the first of all the drivers, to pit, stopping on lap 12 for the undercut, and coming out in free air. Russell was in two laps later, and came out behind Stroll. Sainz headed in next, the gap to Stroll slashed to a second. As more drivers came into the pits, Verstappen was up to P6 and just eight seconds behind Hamilton, Ricciardo helping by keeping the Mercedes driver behind him.

Norris led through to the halfway mark as fans at the Sochi circuit witnessed the calm before the storm – literally and figurately with rain on the horizon. He extended his lead over Ricciardo to 13s, Hamilton stuck behind the Aussie, who was leading a train that included Perez, Alonso and Verstappen. Mercedes told Hamilton: “Get ready to undercut him.” But it was Ricciardo who ducked in, a slow stop cost him time and positions.

Ricciardo into the pits, but it's a slow stop 😖

The Aussie returns to the track in P14 #RussianGP #F1 pic.twitter.com/YtRxRTzyjZ

Hamilton stayed out while Verstappen complained that he “can’t turn the car.” Red Bull told him there wasn’t a gap to release him into it and he could only chase after Alonso while Hamilton, with clear air ahead of him, began to pull away – the gap between the two going from four to six seconds in two laps.

A lock up from Hamilton saw him pit on lap 27, Verstappen also in. Hards for Hamilton, mediums for Verstappen. Hamilton P9, Verstappen P12. And still Norris led, told to give “100 percent pace” with his pit stop looming. A quick stop on lap 29 and he was back out in fourth place – Perez, Alonso, Leclerc still to stop.

With fresh tyres on his W12, Hamilton was quickly up to fifth place, Toto Wolff telling him that he can “win this race”. Verstappen’s progress wasn’t as quick, P10 in the same number of laps.

Hamilton set about hunting down Norris, who himself chased down Leclerc, who had yet to pit, to climb to third place, Perez and Alonso still ahead. Two laps later Hamilton also overtook Leclerc, who finally came in for his pit stop followed by Perez and Alonso. With the pit stops done, Norris lead by three points over Hamilton, Sainz was P3 ahead of Ricciardo, Perez and Verstappen.

13 laps remaining as Hamilton closed to within two seconds off Norris but, as Ricciardo proved to the Mercedes driver earlier in the race, catching is easy, passing is not. The drama, though, was by no means over as umbrellas started going up with eight laps to go….

With the rain growing heavier with each passing lap, Hamilton pitted for inters, Norris decided to gamble on slicks. It was a decision he would come to regret, several slips and slides off the track handing the lead to Hamilton on lap 51 of 53. With the Mercedes driver ahead, Norris pitted, falling down to eighth place. Behind him Gasly and Stroll tangled, Stroll and Vettel did the same and Leclerc had a near miss with the barriers.

Hamilton raced to the win while Verstappen, one of the first to stop for the intermediate Pirellis, benefitted from the late rain, taking second place despite having started P2. Hamilton’s lead is therefore only two points.

Sainz was third ahead of Ricciardo, Bottas, Alonso, Raikkonen and Norris, who is facing a penalty for cutting the white pit lane line. Perez and Russell completed the top ten.