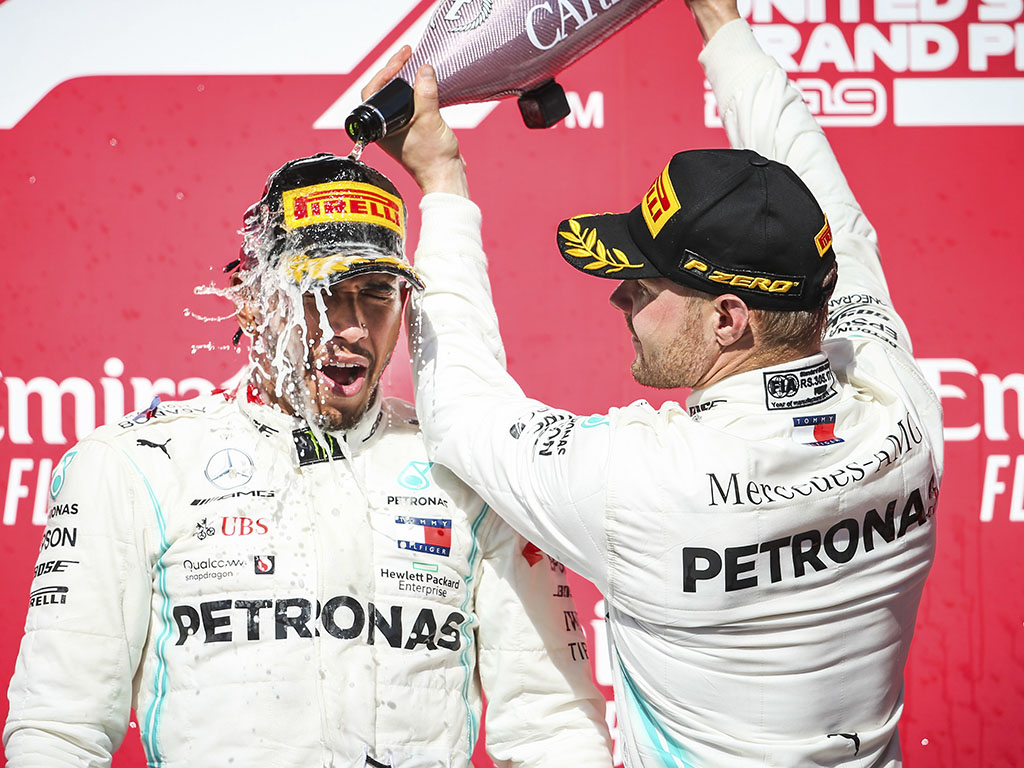 Valtteri Bottas claimed his first-ever win at the United States GP but the day belonged to Lewis Hamilton who has claimed a sixth Drivers’ title with his runner-up result.

110,000 spectators packed the stands at the Circuit of the Americas, many wanting to see Hamilton crowned World Champion and he didn’t disappoint.

The top five all made clean starts with Bottas storming off the line from pole position with Sebastian Vettel the big loser as he dropped from second to sixth, losing out to Max Verstappen, Hamilton, Charles Leclerc and Lando Norris.

Vettel continued to plummet as he was overtaken by Daniel Ricciardo, the Ferrari driver reporting that he had “understeer like crazy”. His nightmare afternoon ended on lap 8 when his rear suspension broke on one of the notorious Turn 9 bumps.

Vettel pulled over onto the side of the track, parking his SF90 in such a manner that only yellow flags were needed. It was, perhaps, another mistake from Ferrari given that if he had stopped anywhere else, it would have brought out the Safety Car and assisted his team-mate Leclerc.

As it was Ferrari dropped out of the battle for the race win, leaving it to Bottas, Verstappen and Hamilton to sort out the podium.

Bottas and Verstappen both opted for two-stop strategies with Hamilton deciding on a one-stopper, one that allowed him briefly – very briefly – to cause additional headaches for Bottas.

Verstappen came in for his first stop on lap 14 with Bottas covering him a lap later while Hamilton took over the lead. Bottas laid down hot laps to close up on Hamilton with Mercedes calling the Brit in on lap 24. Hamilton said no.

“I want to go longer,” he said and then held up Bottas but only for a few corners as the Finn was having none of his team-mate’s antics and passed him down the back straight. Hamilton pitted, coming out third.

With fresh tyres on it was the Brit’s turn to close in on the two ahead, life made a little easier as Verstappen stopped for a second time on lap 35 with Bottas again matching the Red Bull driver. Hamilton was back in the lead, 9s up on his team-mate.

Five laps later that was 5s with Hamilton voicing concerns about whether his tyres were “going to last”. He was told he could stop again, but that it would drop him back to second. Five laps later it was down to 3.5s and then 1.4s with six to go.

A small mistake from Hamilton gave Bottas the run he needed but, wheel to wheel, he came off second best, pushed out wide by Hamilton. The Finn’s second attempt was successful as he DRS’ed his way past his team-mate and up into the lead.

Bottas raced to the win, winning the battled but it was Hamilton who won the war with his P2 enough to secure the Drivers’ Championship. Verstappen joined the Mercedes team-mates on the podium.

Leclerc was a lonely fourth, not helped by a slow 7.7s pit stop. The Monégasque driver’s first stop saw Ferrari struggle to put a new rear left on his SF90. Already out of the fight for the win, he lost any chance of a podium finish.

He pitted again late in the race, in from fourth and out into fourth with the fresh tyres at least helping him bag the point for fastest lap.

Alexander Albon had first lap contact with Sainz, forcing him to pit early and drop all the way to the back of the field. He recovered to fifth.

Albon’s last move was on Daniel Ricciardo, who spent most of the grand prix fighting Norris for best of the rest.

The Renault driver emerged victorious in that battle, P6 on the day, but it was a great result for McLaren as Norris was seventh while Carlos Sainz made it a double points-haul in eighth.

Nico Hulkenberg and Daniil Kvyat completed the points. That was until Kvyat was slapped with what is becoming a traditional post-race penalty for a final lap torpedo and dropped out of the top 10 as a result.