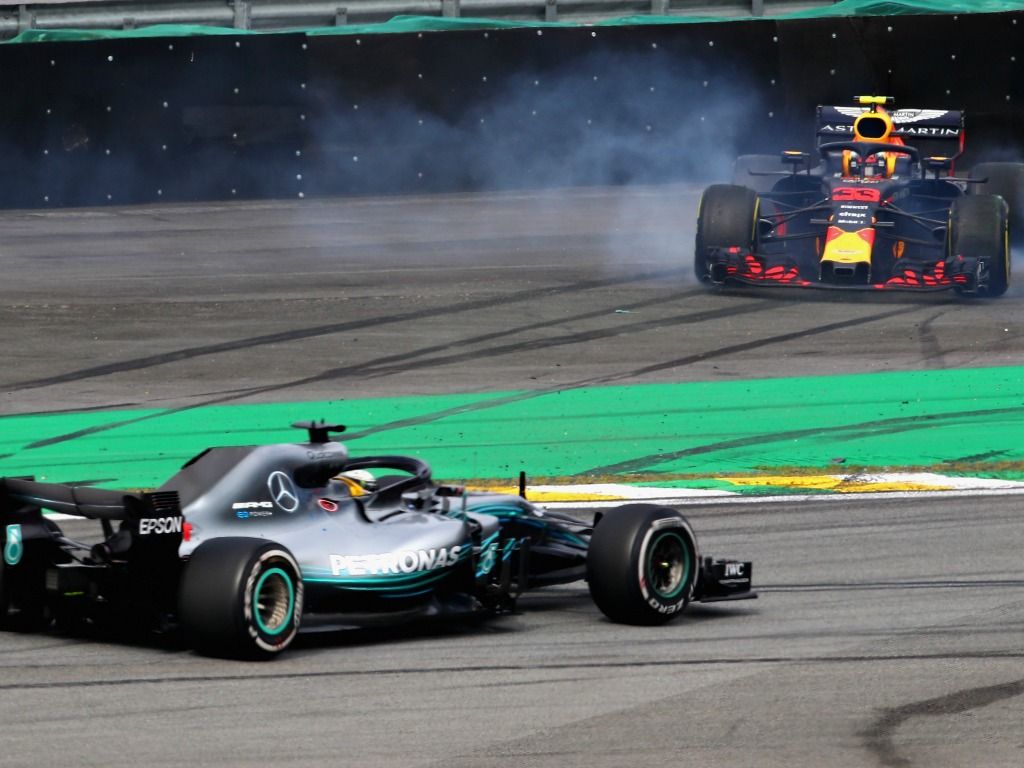 Lewis Hamilton held off a charging Max Verstappen to win the Brazilian GP but it could have been a lot different were it not for a collision between the Red Bull driver and Esteban Ocon.

There was drama even before the first lap of the Brazilian GP with Mercedes reporting an oil leak with Hamilton’s car while Marcus Ericsson, starting a career-best P6 on the grid, lost some bodywork from the rear of his Sauber on the out-lap.

A drop or two of rain also began to fall on the formation lap but that had hardly any impact on the track given the surface temperature was 43’C.

Hamilton and Valtteri Bottas both made flying starts to run 1-2 as they took on the soft-tyres shod Ferraris and won. But it was short-lived as Max Verstappen in his RB14 came into play.

He battled Kimi Raikkonen in the opening four laps before eventually making it stick around the outside up the hill. His next target was Sebastian Vettel, squeezing up the inside with his RB14 riding the kerbs before passing Bottas, taking the inside line at Turn 1 and making it stick.

Verstappen squeezes past Bottas and is now up to second! 💪#BrazilGP 🇧🇷 #F1 pic.twitter.com/BBW5pEo2Xn

15 laps in it looked as if the battle for the win was between Hamilton and Verstappen, the duo seven seconds ahead of third-placed Bottas – the Finn being dogged by Raikkonen, Vettel and Daniel Ricciardo, who recovered from his engine penalty to run sixth.

The advantage was handed to Verstappen when the Mercedes drivers pitted on lap 19 and 20 with Bottas coming in before Hamilton. Both drivers were struggling with blistering and swapped their supersoft rubber for medium Pirellis. Verstappen responded to their pit stops with back-to-back purple times.

Ferrari were the next to pit, Vettel and Raikkonen swapping their soft tyres for mediums. Vettel, who pitted first, came out ahead but a few laps later handed the position over to Raikkonen who was the faster of the two.

Despite starting on the supersofts, Red Bull stayed out before Verstappen eventually stopped on lap 35. He was leading Hamilton by 19.3s but came out three seconds behind the Brit.

Game on as Verstappen’s new soft tyres took on Hamilton’s 15-plus lap medium tyres. He needed just four laps to close the gap and a handful of corners to pass Hamilton, taking a position off the Brit into Turn 1. That position became the lead as Ricciardo pitted, coming out P6 behind Bottas and the Ferraris.

“You’ve done everything you needed to. We’re just stroking it home now. We don’t need any pace,” said Verstappen’s engineer.

Verstappen built up a lead of almost three seconds over Hamilton only to have a moment with the Force India of Esteban Ocon. Ocon, showing pace, tried to unlap himself off Verstappen and went for the inside line.

Verstappen didn’t give him any space which resulted in Ocon’s front left whacking Verstappen’s RB14 with the Dutchman spinning and falling five seconds behind Hamilton.

Ocon was hit with a 10-second stop-go penalty. Verstappen, driving a car with a broken floor, was left to try pick up the pieces while the second Red Bull of Ricciardo made up ground of his own, passing Vettel after a good battle – and minor contact.

His next move was on Bottas for fourth before the Aussie set about hunting down Raikkonen for a podium finish. Bottas and Vettel both came in for a second stop, fifth and sixth respectively.

Ahead of them, three seconds separated Hamilton and Verstappen with 10 to go with three seconds also between Raikkonen and Ricciardo in the fight for the final podium position. That was 2.2 and 1.1s with five to go.

With backmarkers in play Verstappen closed up even further on Hamilton only to drop back when he himself had to pass them. Raikkonen and Ricciardo had similar problems as they ran three seconds behind Verstappen.

5.2s separated the top four as they crossed the line with Hamilton winning the Brazilian Grand Prix ahead of Verstappen. Raikkonen held off Ricciardo to stand on the podium.

The result means Mercedes are the 2018 Constructors’ Champions!

Bottas was fifth, beating fellow two-stopper Vettel on what was a horrid afternoon for the German he struggled for pace throughout the 71 laps and had to settle for sixth place.

Meanwhile, while Ericsson may have started best of the rest in the Sauber it was Charles Leclerc who claimed the position on race day with his P7. The Frenchman crossed the line comfortably ahead of the Haas cars of Romain Grosjean and Kevin Magnussen while Sergio Perez completed the points.

It was a wretched day out for Fernando Alonso in the McLaren as a clutch issue in his pit stop dropped him to the back of the field. He wasn’t too impressed and promptly told McLaren not to speak to him for the rest of the race.

He was later investigated, and found guilty, of ignoring blue flags. He finished P17, only ahead of the Williams of Lance Stroll.

Stoffel Vandoorne was also found guilty of ignoring blue flags in a post-race investigation and was also penalised, moving him down to P15 and promoting Ocon up to P14.