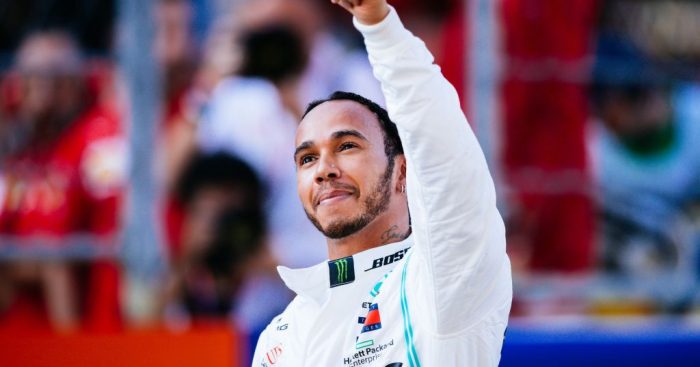 Lewis Hamilton survived a chaotic first lap to win the Mexican GP but Valtteri Bottas’ P3 meant he fell short in his first attempt at wrapping up the 2019 title.

All eyes were on Ferrari on the long run down to Turn 1 as pole sitter Charles Leclerc gave his team-mate a slipstream while still trying to keep him at bay. He succeeded.

Behind them Lewis Hamilton tried to challenge Vettel but ran out of room and then found himself having to defend against Max Verstappen. They made minor contact and both had to take to the grass allowing Alexander Albon up into third place and Carlos Sainz sliding through to run fourth ahead of Hamilton and Lando Norris.

The other Mercedes of Valtteri Bottas, P6 on the grid in a rebuilt W10, also didn’t get a great start and fell to seventh ahead of Verstappen, Daniil Kvyat and Pierre Gasly.

The VSC was out early for debris, which could have been from Romain Grosjean or Kimi Raikkonen, both of whom lost bodywork through the first few corners.

With the race back up to speed, Verstappen made short work of Bottas but cut across the W10’s nose and suffered a rear-right puncture. Bottas fought back immediately with Verstappen running off the track moments later as the tyre came off. He limped back to the pits, falling to P20.

After the chaos of the opening seven laps, which included the Mercedes team-mates getting ahead of the McLarens, the race calmed down with Leclerc running two seconds ahead of Vettel and Albon keeping the Ferraris honest.

Local lad Sergio Perez worked his way into the points to run P8 behind the McLarens, make that McLaren as Norris was pitted only to leave his box with a loose front-left. He stopped before the end of the pit lane which meant his mechanics could push him back and attach the wheel correctly. That, though, was the end of Norris’ chances of scoring.

Lando makes it back out to the track, and the team will investigate the pitstop issue. #MexicoGP pic.twitter.com/A8VUFKMOtU

Albon kicked off the pit stops for the leaders, at least those two-stopping, coming in on lap 15 for new mediums with race leader Leclerc in a lap later. Vettel, telling Ferrari that “everything is peachy”, stayed out with Ferrari informing him that Hamilton is on a one-stopper.

There were more issues in the pit lane as Alfa Romeo struggled to get a new right-rear on Antonio Giovinazzi’s car. He was dropped off the jacks before the tyre was properly attached but stopped immediately.

Back at the front Hamilton pitted on lap 24, swapping to the hard tyres. He came out eight seconds behind Leclerc with Vettel ignoring Ferrari’s orders to pit, instead staying out as he asked them to rethink the strategy. Hamilton, meanwhile, questioned whether Mercedes had stopped him “too early”.

Verstappen’s action-packed Mexican weekend continued as his tried to work his way back into the pits, making contact with Kevin Magnussen in the process. The stewards ruled no investigation necessary. He was up to P10 on lap 31.

Verstappen slices past Sainz and moves back into the top 10 👍#MexicoGP 🇲🇽 #F1 pic.twitter.com/mzOpqD9YG7

Traffic midway through the race cost Vettel at least two seconds in his battle with Bottas as he came up behind the feuding Sainz and Gasly, almost hitting the McLaren while trying to pass him. Mercedes opted to avoid a similiar situation with Bottas and pitted him. He fell to P5.

A lap later Vettel came in, handing the lead back to Leclerc. He came out P4, two seconds behind Albon and three ahead of Bottas. Both put on the hard tyres due to concerns the softs would not last 30-plus laps.

Leclerc came in for his second stop on lap 44, swapping his mediums for a set of hard tyres. It was, however, another case of what can go wrong in the pits as he sat for four seconds as his mechanics had a moment trying to attach the rear-right.

He dropped behind Bottas while Albon came in a lap late and rejoined behind Leclerc. Hamilton led ahead of Vettel and Bottas with the Ferrari driver catching the reigning World Champ and Bottas closing in on Vettel.

Lap 52 saw the first retirement of the race as Norris, two laps down, parked his McLaren. Game over. He was joined later by Kimi Raikkonen.

As the laps counted down Vettel found himself having to defend from Bottas rather than attacking Hamilton, and all the while Leclerc was catching them both. But what looked to be a fierce finish turned into a damp squib.

Hamilton raced to the victory, 1.5 seconds ahead of Vettel while Bottas was third, a further two off the pace. The result means the title race continues into Austin.

Leclerc was fourth ahead of Albon and bagged an extra point for the fastest lap of the race.

Verstappen recovered to sixth ahead of Daniel Ricciardo, who was the last of the one-stoppers to pit, and Perez. Kvyat and Gasly did complete the points with the Russian driver tangling with Nico Hulkenberg on the final lap and putting him into the wall.

However, Kvyat was quickly slapped with a 10-second penalty for causing a collision, putting Hulkenberg back in the points.