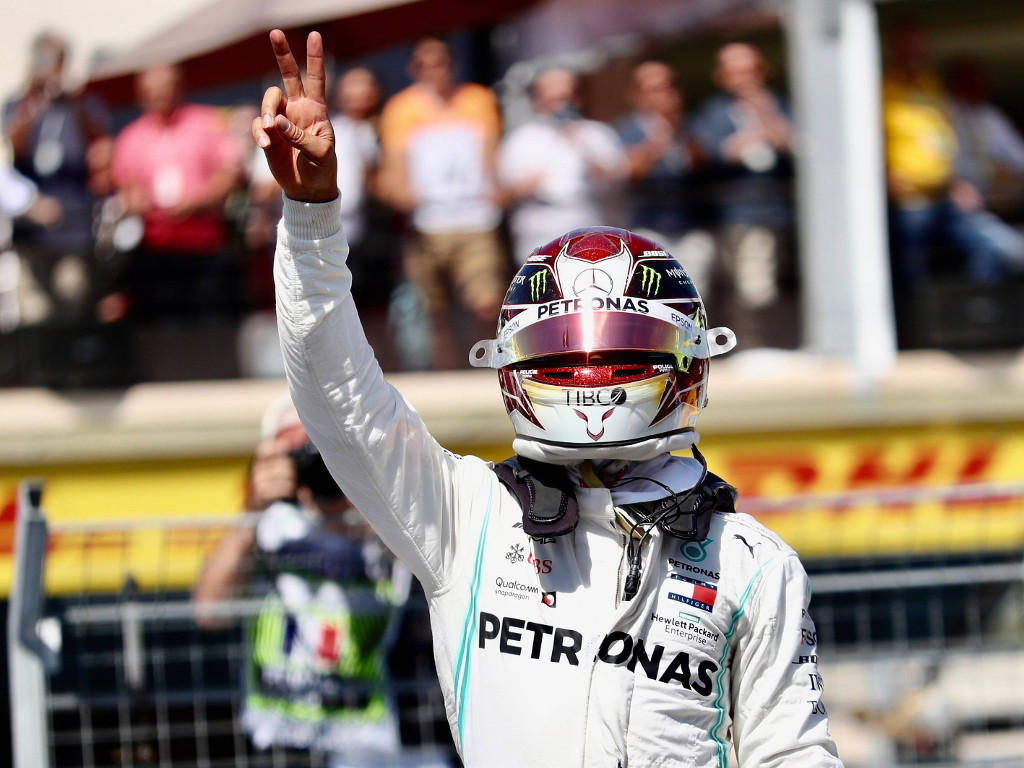 Lewis Hamilton took another step towards a sixth World title as he claimed win number six of 2019 with a flawless display from pole to flag at the French GP.

Hamilton started from pole position and raced unchallenged to the first corner. Unchallenged was in fact the order of the day for the reigning World Champion.

Valtteri Bottas, the only realistic opponent on the day, didn’t even try to fight Hamilton into the first corner, just pulling in behind his team-mate and slotting into second.

Hamilton, who ran a medium-hard one-stop strategy, romped to the victory with a touch of engine setting dramas and a seat issue thrown into the mix – potentially to pretend there was a bit of spice and excitement.

Sunday’s win was Hamilton’s sixth of this season and his back-to-back French GP triumph. It increased his advantage in the Drivers’ standings from 29 to 36 points over Bottas, who was second on the day.

Thankfully behind the Mercedes drivers there was competition, although not exactly the closest one ever seen on a F1 track, for the final podium position.

While Charles Leclerc was informed he’s on “Plan A”, Max Verstappen had a “lag” out of the corners and Sebastian Vettel had to work his way past the McLarens before he could get involved.

The trio were separated by eight seconds with Verstappen in the middle of a Ferrari sandwich when the Red Bull driver pitted. Leclerc stopped a lap later while Vettel was told to “run as long as possible”. He pitted on lap 25, only three after Leclerc. Like those ahead he also opted for a medium-hard strategy.

After their pit stops the trio were separated by 12 seconds with Leclerc seven ahead of Verstappen and Vettel five behind the Red Bull. That was it, game over, podium decided.

Although Leclerc was at one stage told to push by Ferrari to try catch Bottas, he replied: “I could, but it’s not good for the tyres, so no.”

Verstappen was fourth with Vettel P5. The Ferrari driver’s only moment of glory with a late run for fastest lap, pitting on the penultimate lap of the race. He took it – and the point – on the very last lap.

Lando Norris and Carlos Sainz, which quickly became Sainz and Norris, made a fist of it for McLaren. They ran fifth and sixth ahead of Vettel before falling to the Ferrari driver at the chicane; lap 5 for Norris, lap 7 for Sainz.

Sebastian Vettel takes Lando Norris to move up into P6

With 15 laps to go a rather frustrated Norris closed up on Sainz but wasn’t able to find a way past. He complained to McLaren, they opted to keep the status quo especially as Norris had a DRS problem and was told that he “could not use DRS”.

A few laps later it was clear that the hydraulic issue was bigger than just DRS with Norris suffering with heavy steering and other issues. This allowed Daniel Ricciardo to close the gap on the injured McLaren.

Sainz brought his MCL34 home in sixth place with Ricciardo making a late pass on Norris for seventh, who would then fall to tenth in the final few corners. It was still the Woking team’s second double points-haul of the season.

Kimi Raikkonen, Nico Hulkenberg and Lance Stroll all started on the hard tyre and one by one worked their way up to sixth place when they pitted on lap 32, 35 and 40 respectively.

Raikkonen was eighth with Hulkenberg ninth as both overtook Norris in a rather messy situation that saw Norris pushed off the track on the final lap. The stewards are investigating. Pierre Gasly missed out in 11th place. Stroll was P13.

It wouldn’t be F1 at the moment without a controversial penalty, this time for Sergio Perez. He had an off at Turn 3 on the opening lap and although he worked his way around the bollards as the drivers had been instructed to do, he was investigated for leaving the track and gaining an advantage. He was slapped with a five-second timed penalty.

Confirmation of a time penalty for @SChecoPerez for leaving the track and gaining an advantage on the opening lap 👀#F1 #FrenchGP 🇫🇷 pic.twitter.com/lZuIb6lIHN

Robert Kubica beat George Russell for the first time this season but the Williams rookie made two stops to his team-mate’s one.

Romain Grosjean was the only retirement on Sunday afternoon, parking his Haas in the pits on lap 47.

Update: Ricciardo has since been given two five-second timed penalties for leaving the track, rejoining unsafely and forcing another driver off the track and gaining advantage.

It sees him go from P7 to outside of the points in P11.

No regrets. I tried. Would rather that than sit back without a heart.