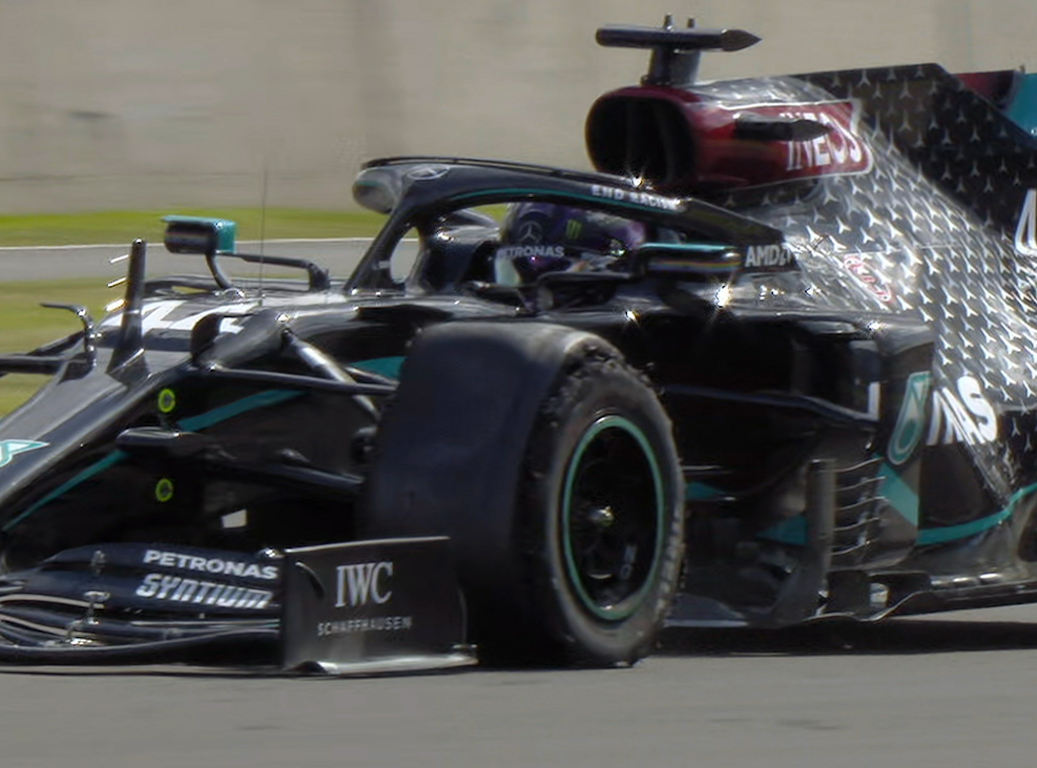 Lewis Hamilton won the British Grand Prix in sparks and drama as his front left tyre went on the final lap of the race, the Brit nursing his car to the chequered flag to take his seventh win at Silverstone.

The Mercedes driver started from pole position, led every lap and was on course for a simple Sunday afternoon victory when, one lap after Valtteri Bottas’ front left went, so too did the Brit’s.

Nursing his car and doing everything possible to avoid crashing, Hamilton took the chequered flag to win the race ahead of Max Verstappen and Charles Leclerc.

Red Bull will be left ruing a decision to pit Verstappen on the penultimate lap to go for the fastest lap point with the Dutchman just six seconds behind Hamilton at the flag.

Lewis can still win with only three wheels. The others don’t have a hope. pic.twitter.com/LAzxpQejtL

Nico Hulkenberg’s Formula 1 comeback was cut short on Sunday afternoon as an engine problem meant his, or Sergio Perez’s, RP20 could not be fired up.

He is set to start from the pit lane at lights out #BritishGP 🇬🇧 #F1 pic.twitter.com/xzKwWEKDnj

“Nico Hulkenberg will not take the start of the British GP after an issue was discovered with his car leaving the garage to head to the grid,” said Racing Point. “Gutted. Absolutely gutted.”

For the remaining 19 drivers the show had to go on, and go on it did with Hamilton having a bit of wheel spin at the start before sweeping through Turn 1 to hold the lead ahead of Bottas, Max Verstappen, Charles Leclerc, Carlos Sainz and Daniel Ricciardo.

Kevin Magnussen’s race ended early as he had a coming together with Alexander Albon. Albon’s front left met Magnussen’s Haas with the Dane’s race coming to an early conclusion in the gravel at Club Corner. That brought out the Safety Car.

Alex Albon's nightmare weekend continues after nerfing the Haas of Kevin Magnussen off at the final corner bringing out the safety car! #BritishGP pic.twitter.com/1BH8Tu3U2s

The race resumed at the end of lap 5 with Hamilton catching Bottas napping with the Finn in turn quickly putting space between himself and Verstappen.

Behind the leading trio the midfield was getting racy with Esteban Ocon attacking Lance Stroll, who boldly defended and held onto P8. Albon, under investigation for the Magnussen collision, pitted for fresh hard tyres, dropping down to 18th place.

The Safety Car was back out on lap 13 when Daniil Kvyat, trying to work his way towards the top ten, crashed heavily with the Medical Car also deployed. The AlphaTauri driver was quickly out of his AT01, which suffered front and rear damage as he spun off at Maggotts, speculation that a puncture may have caused the initial spin. “Oh guys I’m so sorry,” was the Russian driver’s message to his team.

Car looks like it’s hit by… a torpedo pic.twitter.com/KEmnDlm2Lz

That opened the floodgates to the pit lane with the drivers pouring in, all except Romain Grosjean, who moved up to P5. Hamilton, complaining about the speed of the Safety Car, emerged in the lead ahead of Bottas, Verstappen and Leclerc.

The race resumed, again, at the end of lap 18 with Hamilton and Bottas easily saying goodbye to Verstappen and Leclerc with Sainz, Ricciardo and Norris all over the back of Grosjean. Norris tried to attack Ricciardo, who in turn had a go at Sainz with Norris making his move stick and even trying to follow it up with one on his McLaren team-mate.

Race Control confirmed a five-second time penalty for Albon, who was up to 14th place, for causing the earlier collision with Magnussen.

While Grosjean, on older tyres, kept Sainz behind him for a few laps, with some suspect driving that saw him receive the black-and-white flag, that ended on lap 23 when the McLaren driver swept through to take fifth place.

The second McLaren of Norris hunted down the Haas with Ricciardo coming with him. Norris made his move at Stowe, down the inside, on lap 25 with Ricciardo closing in but not able to get close enough.

A train of drivers, led by Norris in P6 with Albon in 14th at the rear, was separated by less than seven seconds. Stuck at the back of the train, Red Bull opted to pit Albon with the Thai driver taking his five-second penalty at the same time.

At the front of the pack, Hamilton led Bottas with the team-mates swapping fastest laps of the grand prix while Verstappen, perhaps bored, was asking his engineers if they were remembering to drink. Leclerc was also having a lonely afternoon running around in fourth place, 20s behind Verstappen and six ahead of Sainz and Norris. As for the other Ferrari, Sebastian Vettel was passed by Pierre Gasly for P10.

Grosjean, the last man to pit, stopped on lap 37 having been passed by Ricciardo, after a “sketchy” block, and Stroll in quick succession. It was a slow stop for the Haas driver, who returned to the action down in 16th place.

Mercedes turned on the tyre issue complaints as the race entered its final 10 laps with Bottas telling the team that he had a bad “vibration” with a line of blisters evident on his front right. Hamilton had the same, not that it slowed either driver.

With the top four seemingly decided barring disaster, Sainz, Norris, Ricciardo, Ocon, Stroll provided the late race suspense while Albon produced the excitement as, with fresher tyres than the rest of the pack, he worked his way towards the top ten, setting fastest laps in the process.

Five laps before the end of the race, Norris told McLaren that “Carlos needs to get a move on” as he had Ricciardo all over his rear wing. Norris, though, was suffering with vibrations.

Kimi Raikkonen’s afternoon went from bad to worse on lap 49 with the Alfa Romeo driver breaking his front wing, leaving a chunk of it on the side of the track. He returned to the pits and fell to the back of the pack.

There was, however, late race drama amongst the top four as Bottas went from vibrations to puncture with his front left tyre going. Bottas lost third to Verstappen and had to pit for fresh tyres. Verstappen also stopped with Red Bull pitting him to go for the fastest lap point. That cost the Dutchman the win.

On the final lap of the grand prix Mercedes’ drama hit fever pitch as Hamilton’s tyre also went, the Brit forced to nurse his car to the chequered flag, spewing rubber with every turn.

He held on for the win, 6s ahead of Verstappen with Leclerc inheriting an unexpected podium.

Ricciardo finished in fourth place ahead of Norris, Ocon and Gasly with Albon, Stroll and Vettel completing the points.
As for Sainz, he was another driver to suffer a puncture on the final lap, falling from fifth to 13th. Bottas was P11.