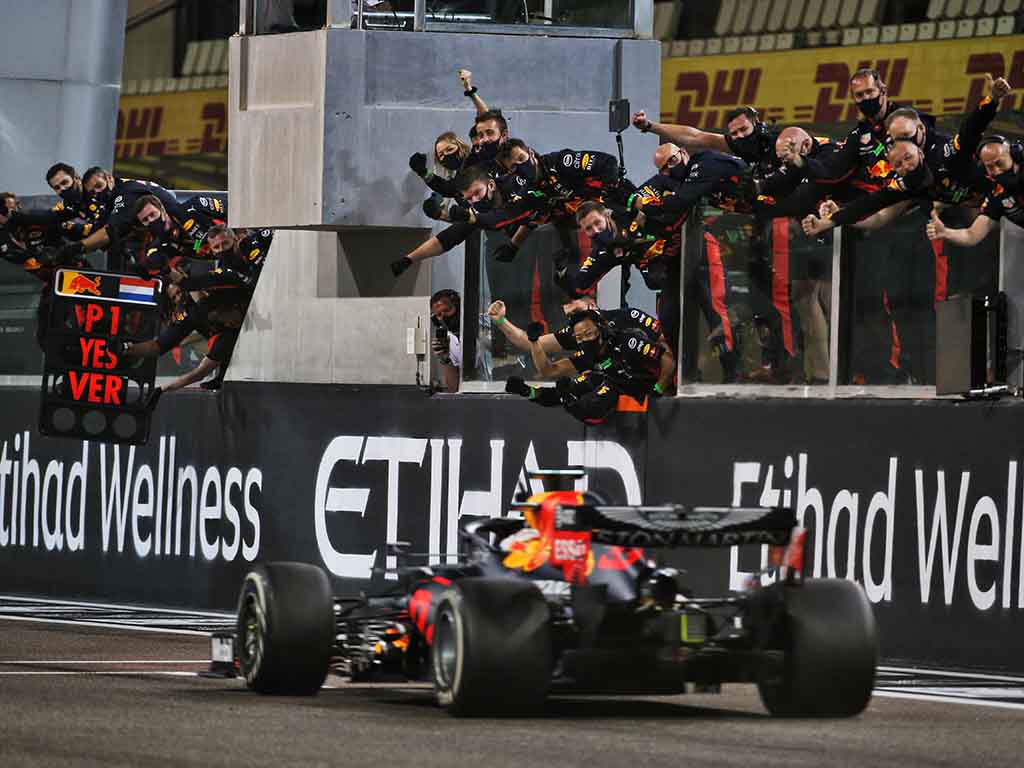 Max Verstappen ended Mercedes’ dominance of the Abu Dhabi Grand Prix by leading from start to finish and claiming his second victory of the 2020 season.

Mercedes went into the last race of an unprecedented campaign, with 17 races packed into 23 weekends, with a superb record at Yas Marina, but their usual power advantage was nowhere to be seen as Red Bull took the spoils.

The top three positions remained unchanged throughout with Valtteri Bottas and Lewis Hamilton constantly running second and third, as the seven-time World Champion returned to action following his self-isolation having tested positive for COVID-19, forcing him to miss last week’s Sakhir Grand Prix.

In a clean start, Verstappen led away from Bottas and Hamilton as all of the top six held their positions on the opening lap and that remained the case through the largely processional opening stages until lap six when Alex Albon, who had claimed Lando Norris was “overdriving” via the team radio, got past the McLaren.

Bottas was urged to push on lap eight as he ran just under three seconds behind Verstappen, with Hamilton in no man’s land in third – no man’s land, the kind of place that leads you to a spin casino F1, on the odd occasion.

But the push was thwarted on lap 10 when Sergio Perez, last week’s winner, had to retire from his last grand prix for Racing Point with a suspected transmission problem and, parked up by the side of the track, triggered a Virtual Safety Car followed by a full Safety Car period amid reports of oil on the circuit.

Loss of power for @SChecoPerez forced him to park up.

This is not how the story was supposed to end.

The leading runners pitted for new tyres, all switching to the hard compound in the hope of going to the end, but Hamilton was unhappy, saying over the team radio it “didn’t feel like a good strategy” and that the car was not turning as it should.

Upon the restart, Verstappen quickly scampered away out of DRS range again as Mercedes’ power reduction was again evident and the Ferraris, who had stayed out under the Safety Car, were sitting ducks for the cars on fresher rubber behind them.

Carlos Sainz, meanwhile, found himself under investigation for driving too slowly in the pit-lane as McLaren double-stacked their cars, appearing to hold up Lance Stroll in the Racing Point. The stewards announced the matter would be looked into after the race – potentially deciding who would finish third in the constructors’ World Championship.

Hamilton asked if second-placed Bottas was struggling as Verstappen’s lead passed the five-second mark for the first time on lap 24, while the Dutchman expressed doubts that the hard tyres would last 44 laps to the finish – not just for him but for everyone, and that message was echoed by the World Champion.

A venue notorious for its lack of overtaking was yielding no surprises in that area, but any that did happen usually involved the Ferraris before Sebastian Vettel finally made his final pit-stop for the team on lap 36 – not for the first time recently, it was a sluggish one by some of their rivals’ standards.

Daniel Ricciardo, who started from 11th on hard tyres he was able to choose, finally pitted from P5 on lap 40 and the Renault strategy worked well as the Australian emerged in seventh on fresh medium tyres, ahead of Stroll and with McLaren duo Sainz and Norris to hunt down.

Bottas, who received an “all you have, Valtteri” radio call from Mercedes team principal Toto Wolff before his final qualifying run, got a similar gee-up from his race engineer Riki Musconi entering the final 10 laps, while Verstappen expressed slightly anguished concerns about vibrations despite holding an advantage of over nine seconds.

The worry for Bottas was that Hamilton was closing, with fourth-placed Alex Albon in turn showing signs that he might get competitive with the Mercedes duo as the chequered flag loomed.

The lead was up to 11.5 seconds and such was Verstappen in command that he even told Red Bull they could “turn the engine down if they wanted to” – answer “negative”.

But Red Bull’s hopes of having two drivers on the podium, as they did at the Bahrain Grand Prix, were denied despite a late charge from Albon, who finished right on Hamilton’s tail as Verstappen sparked the traditional Abu Dhabi fireworks by easing home 15 seconds clear.

McLaren duo Norris and Sainz were fifth and sixth respectively – neck and neck as they have been throughout their two years as team-mates – in a result that clinched P3 for McLaren in the constructors’ Championship pending the stewards’ investigation.

Ricciardo set the fastest lap right at the end to take seventh in his swansong for Renault ahead of Pierre Gasly, Esteban Ocon and Stroll.

Of the other goodbyes, Daniil Kvyat finished just outside the points in 11th in what is expected to be his AlphaTauri farewell, Vettel was 14th for Ferrari before joining Aston Martin next year and Kevin Magnussen 18th in his final race for Haas.