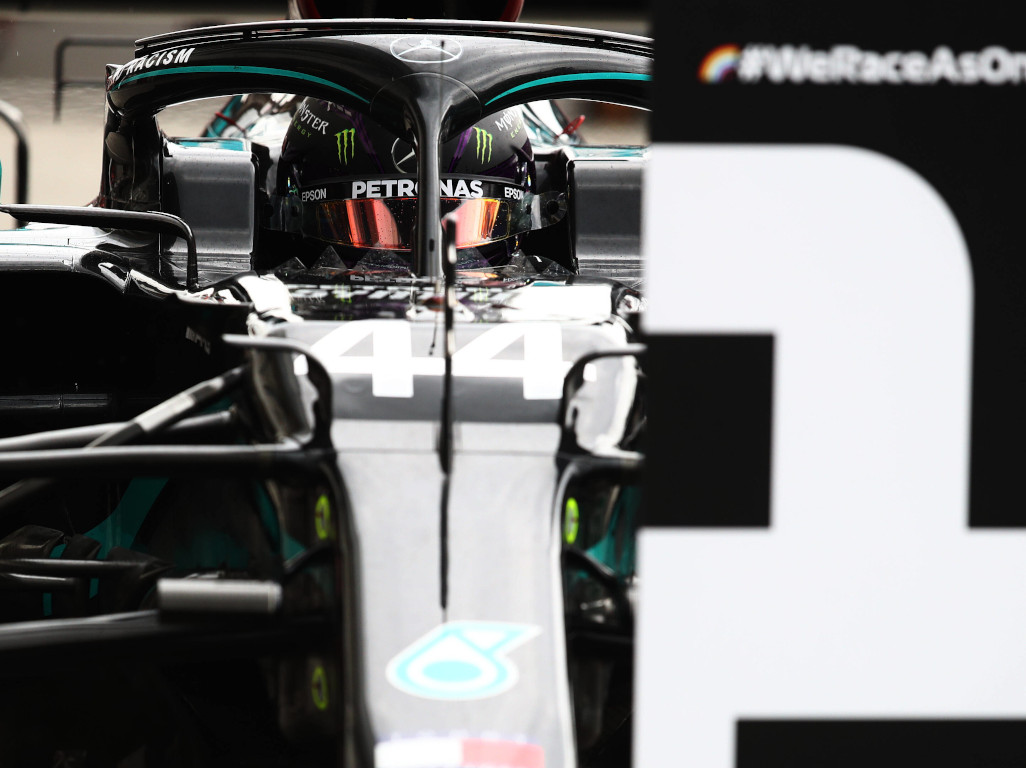 Lewis Hamilton ran a long first stint to set up the victory with the help of a VSC at the Imola Grand Prix with Mercedes taking a record-breaking seventh straight Constructors’ crown.

14 years after Formula 1’s last visit to Imola, the circus was back at the Autodromo Internazionale Enzo e Dino Ferrari for round 13 of the revised 2020 schedule, the Emilia Romagna Grand Prix.

There was a bit of pre-race drama at AlphaTauri as Pierre Gasly, starting P4 on the grid, had a power unit issue on the grid. Honda and AT had the engine cover off, working on the issue, while over at Mercedes Lewis Hamilton’s seat was out of his car and being worked on eight minutes before the formation lap.

Kevin Magnussen and Sebastian Vettel played argy-bargy with the Haas spinning at Tosa while Lance Stroll lost bits of his front wing when he tagged Esteban Ocon’s rear right tyre and had to pit for a new nose.

Early trouble for Magnussen (spin) and Stroll, who pits to repair damage to his front wing 👀

Bottas gets a great start and is P1

Verstappen up to P2, ahead of Hamilton (P3)#ImolaGP 🇮🇹 #F1 pic.twitter.com/4cUYvharGn

Bottas, Verstappen and Hamilton ran in the top three, just over a second between each car – just out of DRS range – with Hamilton reporting that it is “so hard to follow here”. Ricciardo was being dropped by the top three with Gasly keeping the Renault driver honest. Sainz used DRS to take ninth off his team-mate. Gasly’s race ended on lap 8 as a result of his Honda power unit issue, the team telling him to box before the engine suffered a massive failure.

We’ve had to retire @PierreGASLY due to a drop of water pressure #AlphaTauri #F1 #ImolaGP 🇮🇹 pic.twitter.com/v8V1lTcbiq

With degradation higher than expected, the pit stops started early with the points paying positions – Ricciardo, Leclerc, Albon, Kvyat and the McLarens – stopping one after the other with no change of position. Kvyat tried but tagged the back of Albon as he tried to take a position off the Red Bull at the Tamburello chicane.

Verstappen was the first of the top three to stop, swapping his mediums for hard Pirellis and handing second place over to Hamilton. He came out 25s behind the reigning World Champ. Bottas came in the very next lap, covering Verstappen’s strategy. Hamilton, leading on lap 20, was told Mercedes would be “extending” his first stint. Hamilton: “I’m going to pick up the pace don’t stop me.”

Bottas, unfortunately, was told he had “damage on the floor” as Verstappen closed the gap. Told he was being “held up by Bottas”, Verstappen informed Red Bull that his battery is “charging so slow”. Hamilton in turn was asked if he could “extend 10 more laps”, giving him a potential 36-lap opening stint on the mediums.

Ocon retired on lap 29, clutch problem stopping him at Variante Alta. That brought out the VSC, giving Mercedes the perfect opportunity to pit Hamilton. He swapped to hards, came out four seconds ahead of Bottas with Verstappen a further two seconds adrift.

Verstappen began to apply the pressure, challenging Bottas as he closed the gap, but lacking that little bit extra needed to pass. Bottas in turn was informed by Mercedes that he had damaged his car back on lap 2, and that was “significant damage”. That potentially played a role in Bottas putting all four wheels off the track at Rivazza, allowing Verstappen to close those final few metres and take second on lap 43.

Kevin Magnussen added his name to the retirement list when he parked his Haas on lap 49, calling it quits as he was suffering with a massive exit. He was quickly followed into retirement by Verstappen, the Dutchman reporting that “something broke on the car” as his RB16 ended up in the gravel.

Max Verstappen is OUT of the race from P2 – tyre trouble brings his race to a dramatic end! 😬#ImolaGP 🇮🇹 #F1 pic.twitter.com/an7USVqyyi

That brought out the Safety Car with Bottas quickly into the pits. Hamilton stopped on the next lap with Sergio Perez, Kvyat, Sainz and Vettel all stopping followed by others. Vettel’s second stop a lot better than his first earlier in the rac which saw Ferrari struggle with not one but two of his tyres.

The drivers lined up for the restart with Hamilton ahead of Bottas, Ricciardo, who didn’t stop, nor did Leclerc and Albon, Perez, who did, as did Kvyat, Sainz, Norris and George Russell. The Williams driver’s race ended behind the Safety Car as he crashed while weaving to warm his tyres.

The race resumed with six laps remaining with Hamilton easily pulling away from his team-mate who dropped Ricciardo immediately while Kvyat shot up to fourth place. Further behind Perez challenged Albon, the Thai driver spinning by himself. He dropped to the back of the field and pitted for soft tyres to try take the fastest lap point away from Mercedes. He didn’t. New tyres versus old as Kvyat challenged Ricciardo and Perez fought Leclerc.

Hamilton raced his way to the victory, his 93rd in Formula 1, with Bottas second. The team-mates handed Mercedes a record-breaking seventh Constructors’ Championship title. Ricciardo joined them on the podium, holding off Kvyat. It was Ricciardo’s second podium result of the championship.

Leclerc in turned kept Perez behind him while Sainz was seventh ahead of Norris and the Alfa Romeos with Kimi Raikkonen P9 and Antonio Giovinazzi tenth.