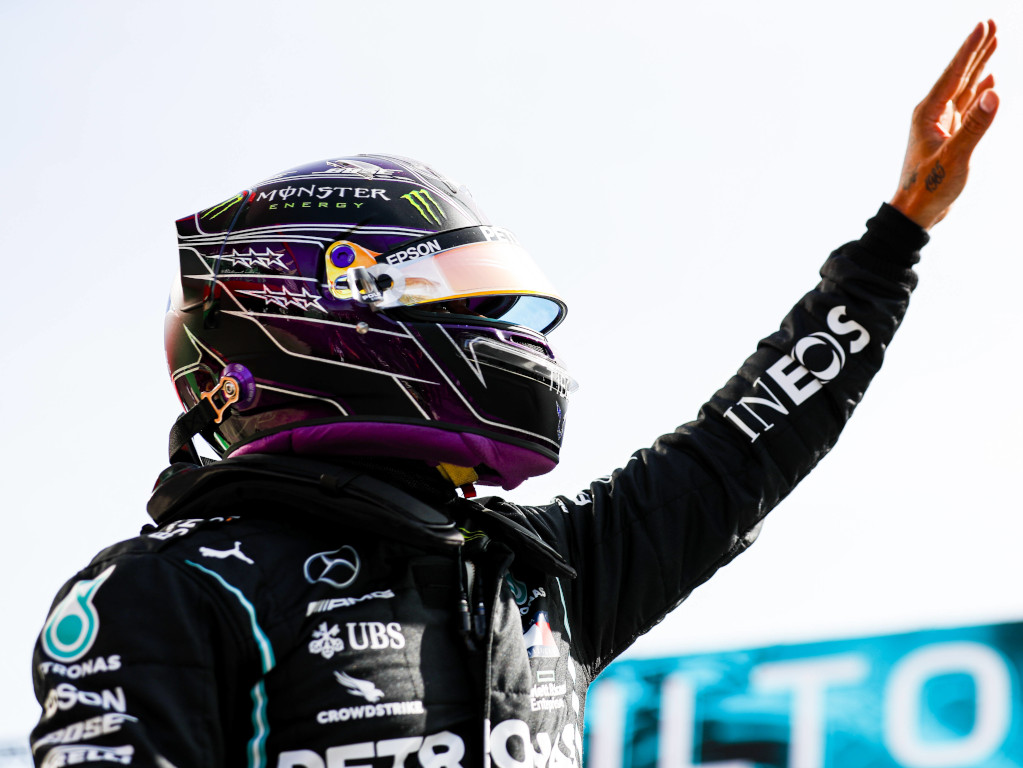 Lewis Hamilton was made to work for it at the Portuguese GP, at least for the first 20 laps, as he fought for his record-breaking 92nd.

The Brit took the chequered flag comfortably 26 seconds ahead of Valtteri Bottas with Max Verstappen in his traditional third.

Lining up the grid on a “icy” circuit, according to Sebastian Vettel, all 20 drivers were well aware that Mother Nature wasn’t going to make it easy for them in Portugal with gusty wind, grey skies and a threat, although small, of rain.

Of the top ten, pole sitter Lewis Hamilton and his team-mate Max Verstappen as well as Ferrari’s Charles Leclerc, lined up on the medium tyres with the rest on the softs.

Hamilton made a flying start to take the lead with Max Verstappen briefly up to second before Bottas took the position back. Trying to fight, Verstappen tagged the Racing Point of Sergio Perez.

As a few drops of rain began to fall, Bottas took the lead off Hamilton, Verstappen ran off the track, Carlos Sainz overtook Hamilton and then made short work of Bottas the McLaren driver’s soft tyres gave him that extra grip needed.

Verstappen and Perez touch and the Mexican slides off into the barriers. He's got going again and has made it back to the pits 😮#PortugueseGP 🇵🇹 #F1 pic.twitter.com/whEfoGinkR

And then the rain stopped, the Mercedes’ medium tyres came into their own, and Bottas and Hamilton began to hunt down Sainz while Verstappen overtook Norris for fourth. Bottas swept past Sainz at Turn 1 of lap 6 with Hamilton following him through before Verstappen made it the tradition 1-2-3 on lap 7.

Leclerc worked his way forward, passing Raikkonen and then Norris, with Ricciardo also taking a position off the Alfa Romeo driver with Gasly through on Raikkonen on lap 10. Stroll and Alex Albon were next to play ‘have you past Kimi Raikkonen today?’ before the Finn pitted for fresh tyres.

As Bottas and Hamilton ran the 1-2, separated by two seconds on their medium tyres, Verstappen dropped seven seconds back wtih Leclerc, also on the mediums, up to fourth ahead of Sainz, Norris, Gasly, Stroll, Ricciardo and Esteban Ocon – Stroll and Ocon having also started on the mediums.

“My left front is dead mate,” was Verstappen’s assessment of his soft tyres. But while Red Bull kept Verstappen out, despite the Dutchman losing seconds per lap to the Mercedes drivers, Renault pitted Ricciardo for a set of the mediums.

Fighting for position Stroll attacked Norris around the outside at Turn 1 only for contact to send him into a spin and break his front wing. “What the beep, beep, beep (and a whole lot more beeps” came from Stroll before he added that he too had wing damage. Both drivers pitted. Stroll was handed a five-second penalty for causing a collision, and later another for exceeding track limits.

Stroll's tries to overtake Norris around the outside of Turn 1 and there's contact! 😮

The Canadian spins off, both drivers have wing damage and they've returned to the pits for repairs#PortugueseGP 🇵🇹 #F1 pic.twitter.com/F0ANqmgaeW

With tyre wear in play and Hamilton telling Mercedes his front tyres weren’t good, the Brit laid down a purple lap to close right up onto Bottas’ rear wing before using DRS to take the lead off his team-mate.

Another purple lap time and Hamilton was a full second ahead and out of DRS range from his team-mate. He extended his advantage to three seconds in three laps. Two laps later, “tyres are pretty good” said Hamilton.

Verstappen stopped on lap 23 for a set of medium tyres which dropped him to sixth. Sainz was the next in, falling to 14th, while Vettel, who had been running as high as P7, came out 15th on a set of hard tyres as a few spots of rain began to fall. Gasly, having a good Sunday, went from fourth to eighth

Leclerc came in for his stop on lap 35, mediums for hards and dropping behind Verstappen, while Perez showed his team-mate how to race with respect – and distance. He went wheel-to-wheel with Ocon for several corners to take fifth off the Renault driver.

Stroll stopped to change tyres and take his 10-second penalty while Russell fell out of the top ten when he stopped, coming out P14. Still no sign of the Mercedes drivers stopping.

10 seconds up on Bottas, Hamilton was told to “box”. He replied that his tyres were “still good” but was told to come in any way ie the win is in the bag.

Bottas then had a conversation with Mercedes about taking on soft tyres with Hamilton having gone for the hards. Not for the first time this season he didn’t get his own way, put on the same tyres as his team-mate. They came out P1 and 2 with Bottas nine seconds behind his team-mate, make that 11 as he struggled to get his tyres up to temperature and up to speed. Verstappen was a further 10 seconds back.

Norris’ day went from bad to worse as he had to pit again due to a slow puncture, falling down to 17th place. Perez also made a second stop but his only saw him fall from fifth to sixth. Albon, having yet another Sunday to forget, also came in for a second stop, P12. He was lapped by Verstappen on lap 52 before being informed he had two warnings for exceeding track limits.

Stroll became the first, and only retirement, as Racing Point pulled him into the pits on lap 53, citing “car damage” and a fear that it would send the driver “spinning off”. And finally, finally!, Ocon pitted on lap 54, the last driver to do so. He dropped from P5 to P8, make that P7 as he quickly overtook Ricciardo while Vettel worked his way into the points with a pass on Raikkonen.

As Hamilton went to lap Perez, who was P5 at the time, Hamilton reported that he had a “cramp”. That, though, did nothing to slow him as he raced towards his 92nd F1 win. Behind him Perez tried his hardest to hold off Gasly but his soft tyres were not match for the mediums. Sainz added to his misery a lap later.

But while the battles behind where thrilling and at teams wheel-to-wheel, the race win was pretty much done and dusted back on lap 20. Hamilton raced to the victory, the 92nd of his Formula 1 career, to beat Michael Schumacher’s record for the most grand prix wins ever. He took another step towards title number seven, 77 points ahead of Bottas who had to settle for second ahead of Verstappen.

Leclerc was a solid P4, one of his best races of this season, ahead of Gasly, Sainz, Perez, Ocon and Ricciardo. Vettel finished inside the points for only the second time in the last six races.