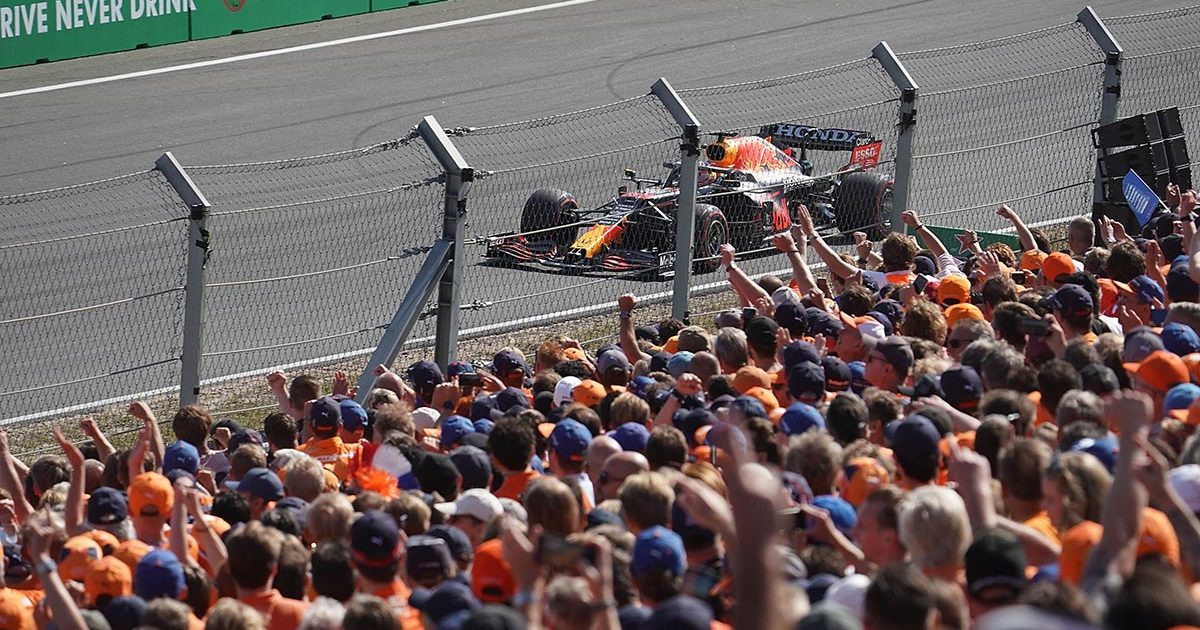 Starting from pole position, the Red Bull driver controlled the race from start – almost – to finish, leaving Lewis Hamilton to try to play the strategy game.

Red Bull counteracted every time, with Verstappen racing to the victory ahead of his title rival. In doing so he took a three-point lead in the Drivers’ Championship.

Valtteri Bottas, whose only impact on the battle for the race win was to hold up Verstappen for a lap, was third. There was a bit of drama for Mercedes late on as Bottas took the fastest lap point off Hamilton forcing the Brit into a late stop to get it back.

Only 18 drivers lined up on the grid with Sergio Perez – engine and energy store – and Nicholas Latifi – gearbox and a new nose/front wing assembly – both starting from the pit lane while Max Verstappen and Lewis Hamilton sat on the front of the grid, the Dutchman’s RB16B pointing inwards to cover his title rival.

Both made fantastic starts but it was Verstappen who ran P1 ahead of Hamilton, Bottas covering his team-mate’s rear ahead of Pierre Gasly. The AlphaTauri driver keeping the Ferraris at bay as lap 1’s first foray through Turn 3 showed an impressive array of lines through the banked corner.

Fernando Alonso had a near miss with George Russell as he was pushed wide, came back onto the track and almost took the Williams driver’s nose off. On his next lap it was Daniel Ricciardo causing troubles for Russell, the Brit telling Williams, and McLaren, that Ricciardo was “smoking and dropping oil”, the Aussie holding down the final points-paying position.

Further back the Haas intra-team battle raged as Nikita Mazepin cut off Mick Schumacher to take 17th place. As a result the German headed into the pits for a new nose.

10 laps into the 72-lap race and Verstappen was leading by 2.8 seconds ahead of Hamilton with the Mercedes driver given the hurry up by his team, Red Bull telling Verstappen that they believed his title rival had switched to a two-stopper.

His Red Bull team-mate Perez was down in 19th place having pitted for fresh medium tyres having flat-spotted his previous set while battling Mazepin for position. Sebastian Vettel followed him in as some teams gambled on early stops.

Verstappen extended his advantage to 3.5s after 20 laps, Hamilton comfortably ahead of Bottas – who was told that “at this pace you aren’t going to interact with the leaders” – and Gasly, still running P4 but a pit stop behind the leading duo.

Bottas led the race with Red Bull facing the prospect of the Finn holding up their man – “be interesting to see what they do with” said Christian Horner. The up side for Red Bull, Perez was showing that it is possible to pass as he climbed to 11th place ahead of Yuki Tsunoda and Robert Kubica.

As Verstappen closed in on Bottas, the Finn 0.6 seconds up on lap 30, Hamilton closed the gap to the Red Bull driver. Bottas was told by Mercedes “this is for the race win” and was urged to “defend”. That lasted all of one lap, Verstappen back up into the lead to the roar of the crowd. Hamilton followed him through… but Verstappen put some space between them immediately. Bottas pitted, coming out P3.

Verstappen gets past Bottas to reclaim P1 👀

And a few seconds later, Bottas lets Hamilton through to take P2

Behind them midfield started off their pit stops with Carlos Sainz and Esteban Ocon in, followed by Fernando Alonso with Daniel Ricciardo and Antonio Giovinazzi also stopping, the Alfa Romeo driver then stopping again because of a puncture. Then came Charles Leclerc and George Russell, the latter’s stop earning him a five-second penalty for speeding in the pit lane. Vettel had a spin into Turn 3 with Bottas flat-spotting his tyres as he took evasive action.

With the gap up to 2.7s on lap 40, Mercedes brought Hamilton in for a second stop for fresh medium tyres, he came out in traffic. Verstappen and Red Bull responded, new hard Pirellis. He came back out P1, 3.1s the difference. This time Bottas could not get involved while Lando Norris was the last driver to pit, falling from P7 to P11 before McLaren swapped the drivers around, putting him ahead of Ricciardo. Gasly was back up to P4 after all the pit stops. Mazepin parked his Haas, retiring from the race.

Despite being on the hard tyres, Verstappen matched Hamilton’s mediums for pace, the Brit complaining that there “doesn’t seem to be an advantage” adding that Red Bull had “called our bluff too soon”. The complaints continued: “It’s a damn long way to go on this tyre man”. Lap 50, Verstappen’s lead was up to four seconds with Hamilton saying several times that his title rival was just too fast.

Lap 60, and despite his tyre complaints, it was down to 2.4 seconds only to start going back in the other direction as Hamilton reported that his tyres were going off. Told of the bigger gap, Verstappen asked “is he complaining about something” and was told Hamilton’s tyres were gone.

Verstappen raced to the win to the applause of his orange army and in doing so took the lead in the Drivers’ Championship with his seventh win of 2021. Hamilton was second ahead of Bottas. The Finn made a late pit stop, lap 68, but was told not to go for the fastest lap – “Valtteri this is James, please abort” the fastest lap attempt. He didn’t, taking the point off Hamilton. Hamilton therefore stopped on lap 71 to go for it on lap 72. He got the point.

Verstappen lapped the entire field except the two Mercedes drivers. Gasly didn’t put a wheel wrong to finish P4 ahead of Leclerc, Alonso and Sainz. Perez bounced back to finish P8 with Ocon and Norris completing the top ten.