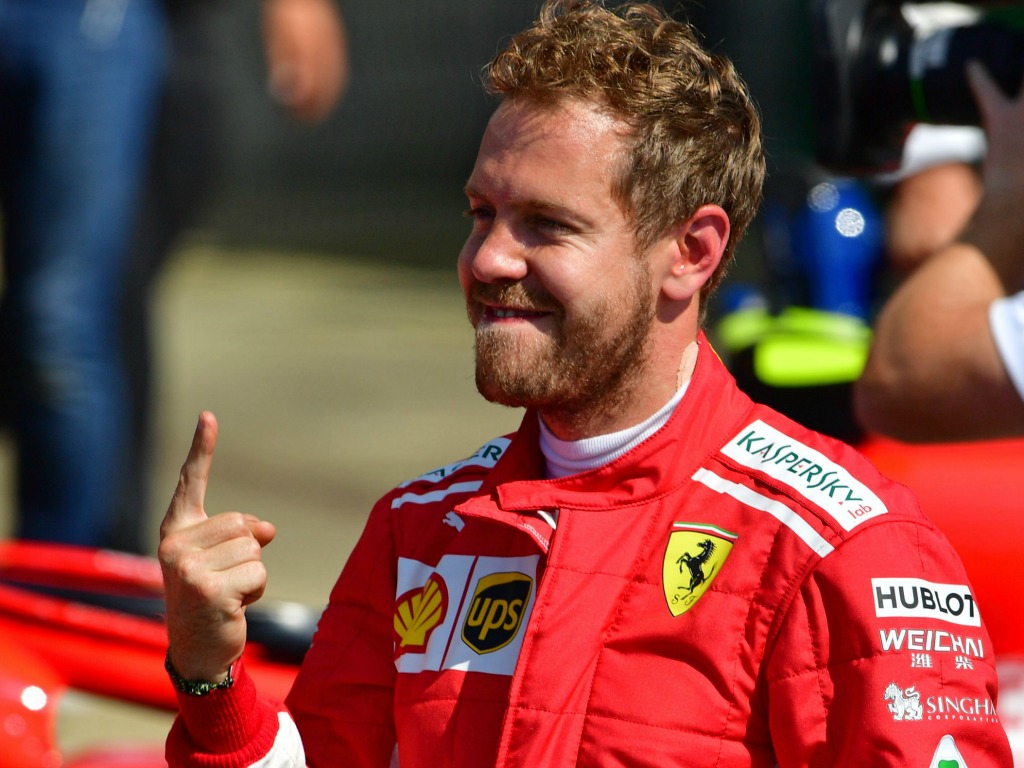 Sebastian Vettel made the most of his second set of soft tyres to win the British Grand Prix, a race that saw two Safety Cars and Lewis Hamilton recover to second.

Hamilton started from pole position, chasing a record sixth victory at the British Grand Prix. But it wasn’t to be.

He got bogged down at the start, passed by Vettel and Valtteri Bottas before being caught out by Kimi Raikkonen as the Finn missed his braking. Hamilton spun but stayed in the race, albeit down in 18th place.

“I think my car is broken. Right rear is damaged,” he told Mercedes but continued lapping and working his way through the field.

Raikkonen was given a 10-second time penalty for the incident.

Vettel powers into the lead

Kimi tags Hamilton, who drops down to P17! 😱

HAM: "Damaged car on the back, I think my car's broken, man!…"#BritishGP 🇬🇧 #F1 pic.twitter.com/eIcXKo2xkU

At the front Vettel was in a league of his own, five seconds up on Bottas when Hamilton made it into the top ten on lap 6, easily overtaking the Haas of Kevin Magnussen to run P10.

10 laps into the 52-lap race and Vettel was in control, six seconds ahead of Bottas who in turn was five ahead of Verstappen. Hamilton was P6, 28s behind his championship rival.

Raikkonen was the first of the top six to pit, coming in on lap 14 and sitting stationary for 10 seconds for his penalty. He came out in 11th place, outside the points.

Verstappen came in on lap 18, Ricciardo on lap 19, Vettel lap 20 from four seconds ahead, Bottas on lap 21 thus handing the lead back to Vettel, and Hamilton eventually stopped for a new set of mediums on lap 25.

The pit stops played out with Vettel leading by 3.5 seconds over Bottas, Verstappen was a further four behind ahead of Ricciardo, Raikkonen and Hamilton.

Ricciardo came in for a second stop on lap 31, swapping his mediums for a new set of soft tyres… minutes later the grand prix was under a Safety Car as Marcus Ericsson crashed at about 180mph. The Sauber shot through the gravel and went nose first into the tyre barrier at speed.

Vettel pitted for fresh soft tyres, Bottas stayed out, Verstappen pitted, Raikkonen pitted, Hamilton stayed out as did Ricciardo who had just pitted.

They lined up behind the Safety Car with Bottas in front followed by Vettel, Hamilton, Verstappen, Raikkonen and Ricciardo. Hamilton voiced his concerns about his worn mediums battling against the fresh soft tyres all around him.

A HUGE off for Ericsson, as he loses it at Turn 1#BritishGP 🇬🇧 #F1 pic.twitter.com/Q2qlmpX4wP

The race resumed on lap 37 only for the Safety Car to come out again as Carlos Sainz crashed with Romain Grosjean. Both drivers in the dirt and out of the race. “He turned into me,” was Grosjean’s assessment.

The race resumed again on lap 42 with Bottas making another great start to hold the lead ahead of Vettel. However, the Ferrari driver had the fresher tyres and made them work for him as he raced wheel-to-wheel with the Finn for several laps before eventually taking the lead on lap 47.

That lap also saw Verstappen retire after losing out in his battle with Raikkonen.

Vettel raced to the victory by two seconds ahead of Hamilton and Raikkonen. Bottas, whose tyres seemed to fall off, fell to fourth as he just managed to hold off Ricciardo.

Nico Hulkenberg was best of the rest for Renault, taking the chequered flag ahead of Esteban Ocon, Fernando Alonso, Kevin Magnussen and Sergio Perez, the latter promoted to P10 after Pierre Gasly was penalised after the race for an illegal overtake with a five-second penalty.

Charles Leclerc’s run of points-scoring results came to an end when he was released from the pits with a rear tyre not properly attached. He had been fighting for a top-ten result.

Meanwhile Brendon Hartley did not take the start of the grand prix, missing the race as Toro Rosso were still working on his car when it began. They had hoped to get him out but after two laps declared it game over.