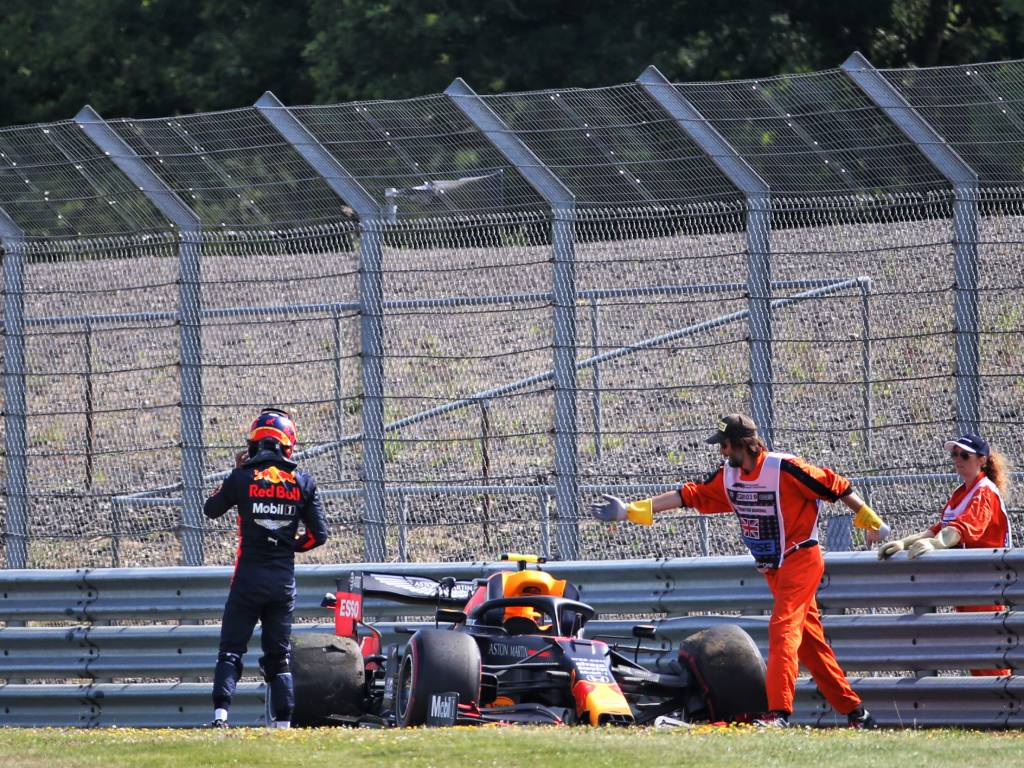 A day of highs and lows for Red Bull in practice for the British Grand Prix featured a crash for Alex Albon and an on-track spat with Romain Grosjean for Max Verstappen.

In terms of pace, there were some real plusses. Verstappen was fastest of all by almost half a second in FP1 at Silverstone, while Albon finished P2 in the afternoon session – a big improvement on the team’s struggles in Hungary two weeks ago.

But the Dutchman was thwarted on a hot lap in FP2 when he encountered Romain Grosjean’s cruising Haas on the racing line, prompting Verstappen to slow down and give his rival a piece of his mind via hand gestures and a verbal blast over the radio.

Albon, meanwhile, did nothing to convince his critics that he is the right man to occupy the second Red Bull seat when he spun off at Stowe and slammed backwards into the barrier, ending his session and forcing his team into a Friday evening rebuild of his car.

Asked how he was feeling physically after the impact, the London-born Thai driver told the official Formula 1 website: “Fine. I’ve had bigger crashes but it’s okay.

“I’ll have to have a look at it. The rear went quite quickly. I struggled to correct it, I thought I had it then obviously [I had] a bit of a tankslapper as well. We’ll have a look at the data and see.”

But on the positive side, i.e. the car’s pace, Albon added: “We definitely made a step as a team. The car feels good, as we expected it would coming into Friday, but the car was hooked up straight away the first time we drove it in FP1, so it’s looking good.

“I think the Mercs are hiding quite a lot, so we’ll watch them tomorrow.

“But otherwise as a car, it feels more balanced. The weather and the wind was so much different to what we’ll get tomorrow though. It will be a little bit of a reset starting then.”

Verstappen’s run-in with Grosjean meant he filled only P14 in the afternoon as he then switched focus to Sunday’s set-up, but he remains optimistic for the rest of the weekend.

“I got blocked on my fast lap and then moved on to race runs, so I don’t have a proper time on the board for FP2,” he said. “But in the end that doesn’t matter on a Friday and it wasn’t a bad day for us.

“We keep developing and bringing new parts to the car and they seem like they are working a bit better, so I’m happy with that and the direction. Overall the car felt better today.

“On the long runs we also looked quite decent, but who knows what the weather will be like for the rest of the weekend and how that will change things.”