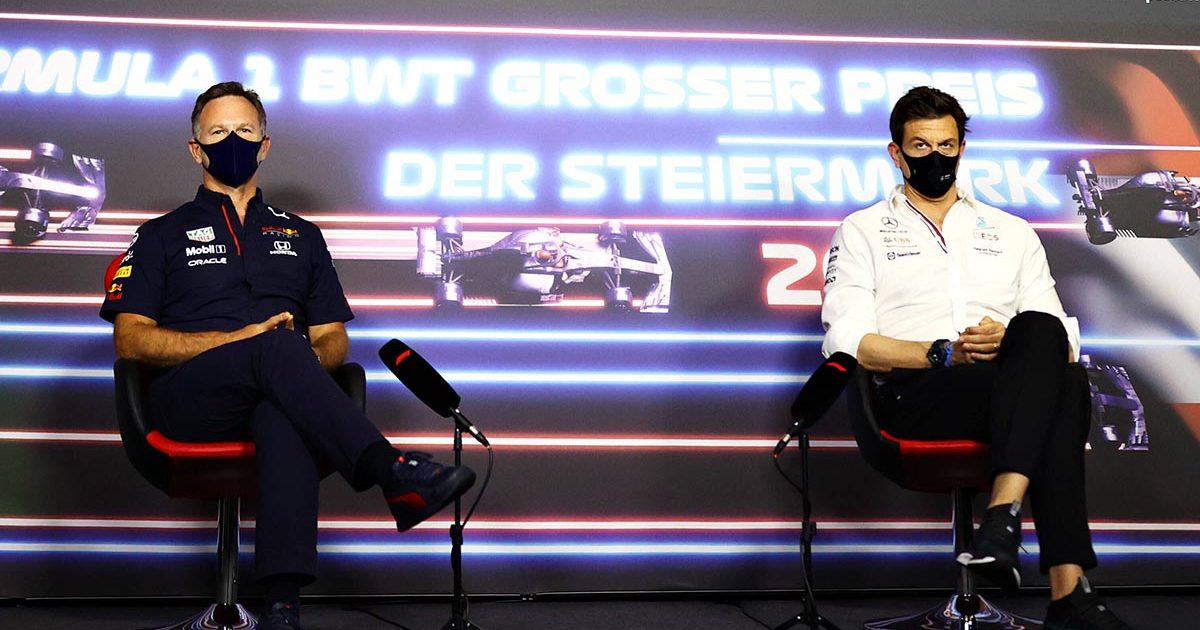 Mercedes boss Toto Wolff has questioned why Christian Horner and Red Bull are being overly defensive about claims concerning their Honda power.

Red Bull have won four races on the bounce following Max Verstappen’s latest win at the Red Bull Ring and that has led rivals Mercedes to continue to speculate as to where Red Bull’s pace is coming from.

One area drawing plenty of attention in recent weeks, unnecessarily so in Red Bull’s eyes, was the arrival of Honda’s second power unit of the season ahead of round seven in France.

Wolff and Lewis Hamilton have both said that Red Bull have been boosted by an improved engine from their Japanese suppliers – even though an engine freeze is in place.

The Mercedes boss stood by his claims after Horner dismissed any suggestion of a horsepower increase being behind their latest run of success, as improvements can still be made even if they are not directly designed to provide a power boost.

Wolff, though, is wondering why Horner is so defensive about the engine.

"Some of the theories Lewis has are sometimes some way from reality."

Christian Horner is not impressed with some of Lewis Hamilton's theories as to where Red Bull's pace is coming from.https://t.co/K6pL9s8cdI #F1 pic.twitter.com/6k35FwEJIo

“I wonder why that is such a topic, when we all know that the power units need to be homologated,” Wolff told Autosport when asked again about Honda’s power unit.

“I’m really surprised that the Red Bull guys keep protesting so loudly on the power unit story. So that is a bit weird.

“The rules are very clear. It’s homologated, you can come up with reliability fixes, and that’s it.

“Obviously there are certain things you can clean up, but you have your tokens and you need to use them, and that’s it.

“So there shouldn’t be any power advantage as such.”

Horner is not the only one strongly defending the claims made about the Honda engine, with Verstappen also offering to fire up his printer and give everyone proof that Red Bull’s gains have come from the low-downforce rear wing rather than the power unit.