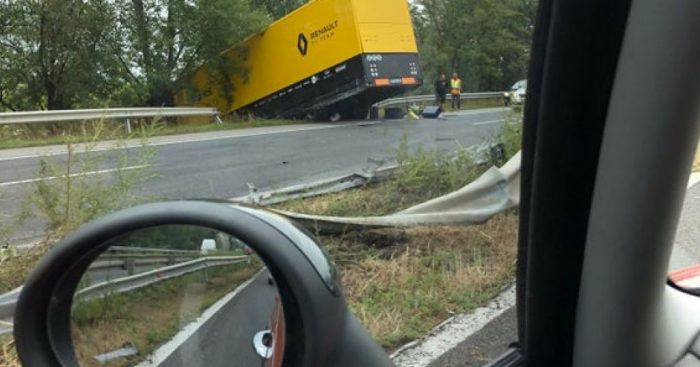 The driver of a Renault transporter truck has escaped without serious injury after crashing on a motorway as he headed for the Hungaroring.

After leaving Hockenheim on Sunday night, the truck was travelling to the scene of the next grand prix in Hungary, but it would crash through motorway safety barriers leaving the tractor unit and half the trailer stranded on a grassy verge.

Renault have confirmed that the driver of the truck was not seriously injured and that no other vehicle was involved in the accident.

“We confirm that a Renault F1 Team truck was involved in an accident on the M1 in Hungary, near Gyor,” the team said in a statement.

“The driver, who was driving within the respected regulations, was extracted from the vehicle. He is conscious and has not suffered serious injury.

“He has been transported to hospital in Hungary for further checks. No other vehicles were involved in the incident.”

The truck has been recovered and what it was carrying has not been revealed.