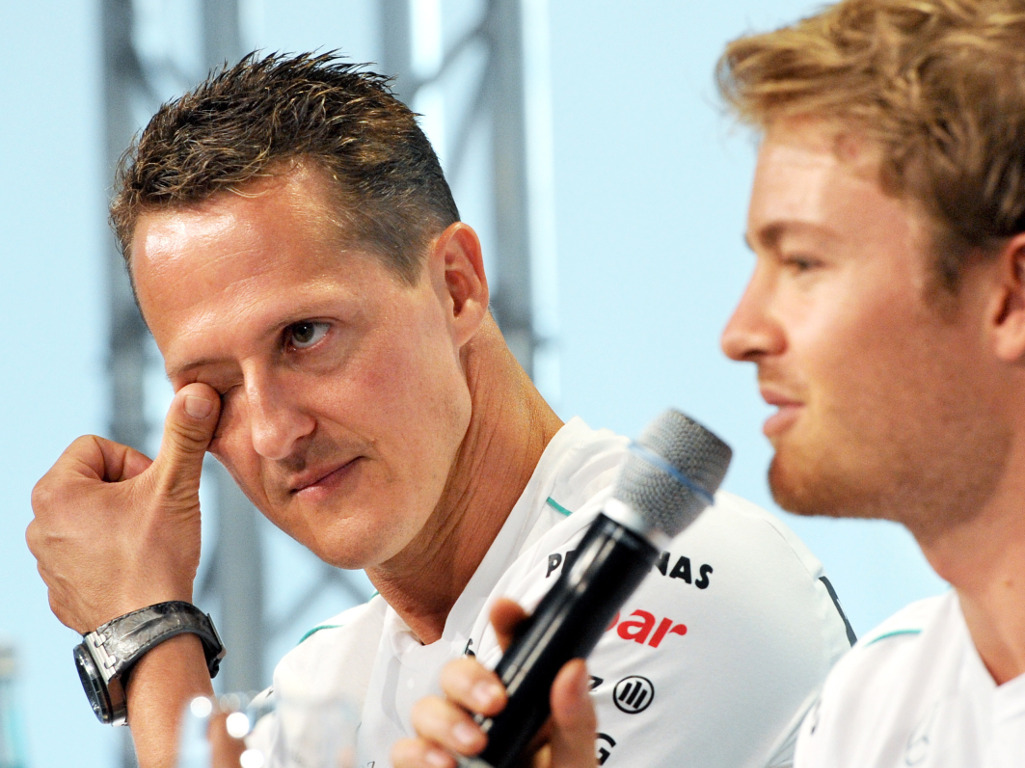 Nico Rosberg may not have appreciated Michael Schumacher’s mind games during their time at Mercedes but he says it helped him take on Lewis Hamilton, and win.

Rosberg joined Mercedes in 2010, teaming up with the returning Schumacher.

The first sign that Schumacher held all the cards was when the seven-time World Champion was handed Rosberg’s car number, 3, because of superstitious reasons.

Rosberg was the one to beat, at least out on track, taking three podiums in the team’s first season while Schumacher failed to reach the top-three.

However, it was the elder statesman who played the team-mate game better as he used mind games to throw Rosberg off.

One incident, the 2016 World Champion, recalls involved a toilet.

Speaking to Daniel Ricciardo on Beyond Victory, Rosberg told his podcast: “I had Michael Schumacher as my team-mate. This guy for three years: Mr Mind Games. He doesn’t even have to think about it, it just comes natural to him. It’s just the way he is.

“That was a big, big learning curve.

“There’s so many examples. One, Monaco qualifying. There’s only one toilet in the garage and so he’s in the toilet and I go down and it’s 10 minutes before and I know that I have my two-minute session now for the last pee then jump in the car and go, qualifying.

“So I knock on the door because it’s always locked, ‘Nico here, please let me in’ because usually it’s the mechanics who will then know in this moment I have to be the priority. No answer, nothing. So I’m like knocking, knocking – no answer but I can hear that someone’s in there.

“Here was Michael, in the toilet, leaning against the wall looking at his watch and he knew as long as he made it out with three minutes to go, he could just about jump in the car, put the seat belts on and go before losing actual time and ruining the whole team strategy of qualifying.

“He’s in there looking at his watch, just like chilling out, counting down, and I’m outside in full panic mode because I can’t go in qualifying with a full bladder, it absolutely sucks like anything.

“There’s no options for me. I went for the oil bucket option in the corner. There was no option. Mechanics working and running around and I’m just there…

“I managed to do what I needed to do but the panic had such an impact on my qualifying. While I’m with my oil bucket, the door opens, Michael chills out, walks out and as soon as he leaves from the corner he starts walking faster because he knows it’s like two seconds to go until qualifying.

“These games all day long.”

Rosberg reckons Schumacher’s aim to show him that he didn’t matter, he wasn’t a threat, a lesson that proved vital when the German took on Hamilton at Mercedes in 2013.

While the Brit claimed back-to-back World titles in 2014 and 2015 with Rosberg runner-up, he fought back in 2016 to beat Hamilton by five points.

Rosberg continued speaking about Schumacher: “One of his main missions was never to show that I existed in his life.

“In any meetings, he would never ask, ‘What was done on Nico’s car?’ or ‘Hey Nico, what did you think?’ Not once in three years. I did not exist.

“He wouldn’t show me at all that I even play a tiny role in his mind at any time. It was so warrior extreme but it was a great approach. It was never exaggerated or unfair or evil, always the fine line, and every day. I learned a lot.

“With Michael I think it really came so naturally, he lived and breathed it. With me, I’m the opposite of that and I had to learn it.

“Especially with Lewis in the team because you have to stand up and think about those things and fight against those things otherwise there’s no chance.

“I really had to change quite a lot and that was tough. I always had to think about it, it would never come naturally.

“I always thought, ‘OK, I have to do this now even though it’s discomfort because I know it’s going to put him some self-doubt.’ That’s part of the game but for me it’s really not natural.”