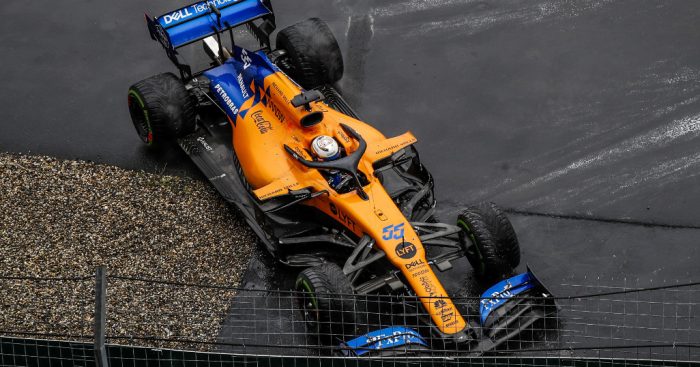 A mere 1.3s shy of the podium, Carlos Sainz reckons he was denied by rivals’ “risky decisions” at the German Grand Prix.

Formula 1 arrived on the Hockenheimring grid to the welcome sight of rain, at least it was welcomed by the fans.

It led to a chaotic race in which most drivers pitted four times, swapping wets for inters and inters for slicks only to have to go back onto Pirelli’s wet-weather tyres.

But as the conditions changed again in the final 10 laps, Toro Rosso and Racing Point were two of the first teams to bring their drivers – Daniil Kvyat and Lance Stroll – in for a final change onto slick tyres.

The rest of the field followed suit but the early swap had given Kvyat and Stroll too much of an advantage. The finished ahead of Sainz with Kvyat taking the final podium position.

“Every decision that we do probably was the right one,” said Sainz. “In the end we lost out on a podium because of two cars with nothing to lose.

“They pitted for slicks and benefited from that. When you don’t see the Mercedes, Red Bull or Ferrari pitting you say, we are P5 we are crazy if we pit now and we miss this.

“We were very close to pitting and that would’ve given us a podium place but in the end it was wise that we didn’t but the others benefited from the risky decision.”

Sunday’s grand prix was the first wet race of this season with Sainz, who started P7 but lost ground when he spun, admitting he struggled in the wet.

“Honestly, I was not really comfortable with the conditions,” he said.

“We were running a smaller rear ring than the rest of our competitors and we struggled to warm up our tyres. When you got into a rhythm it was fine but just the restarts we struggled.

“That spin cost me, but in the end we were the only car not to pit for slicks halfway though the race as it started to rain again to it was a good call that gave us back the position.”