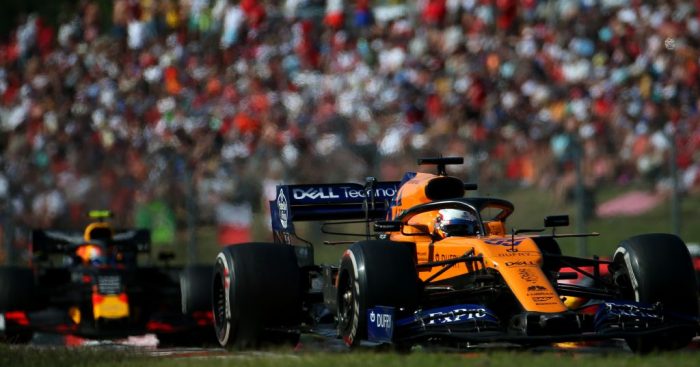 McLaren’s Carlos Sainz was delighted to beat a Mercedes and Red Bull in a “normal race” at the Hungarian GP.

The Spaniard finished P5 ahead of Red Bull’s Pierre Gasly, while he also got the better of Mercedes’ Valtteri Bottas who finished P8 after early front wing damage.

The result meant Sainz closed to within five points of Gasly in the Drivers’ Championship, and the positive feeling at McLaren is continuing to grow.

“I’m very happy in a normal race to beat a Mercedes and a Red Bull,” Sainz told the official F1 website.

“After a good start, great pace in the first stint, I was told that the last 10 laps of the first stint we were actually quicker than the Ferraris and opening a big gap with the guys behind.

“Finishing P5, you know in a normal race as I said is really really good news.

“My second consecutive P5, which I think I’ve never done in my life, so I’m very very happy with that.

“Especially this P5 – I don’t know why but it tastes a lot better than the Hockenheim one. In a normal race where we just managed to beat Pierre (Gasly) and finish ahead of a Mercedes, it felt particularly good this time.”

Gasly had a sniff of denying Sainz P5, but the Spaniard used the performance of the MCL34 and his defensive skills to hold his position.

“(Gasly) was very close but he never really got a chance,” said Sainz.

“I was thinking about it, similarly like with Ricciardo in Silverstone, just trying to place the car in the right places and don’t make any mistakes. We didn’t give him the chance. Also having the pace we had here also helped of course.”

A strong effort from the crew in Hungary and back in Woking. 🤝🇭🇺 pic.twitter.com/l8GvoAdrJN

Team-mate Lando Norris looked likely to achieve a similar result after running just behind Sainz in the first stint, but issues in the pits forced him to settle for P9.

“The beginning was reasonably good, I got ahead of a Red Bull, but I was a bit cautious because I knew Carlos was somewhere around me, not because he’s an aggressive driver but because he is my team-mate,” Norris explained.

“We had some good pace in the car today, just lost out in the pit stop.

“So, it made it even tougher, Carlos got some really good points for the team, and for us, I got two points so it was still a good race.”