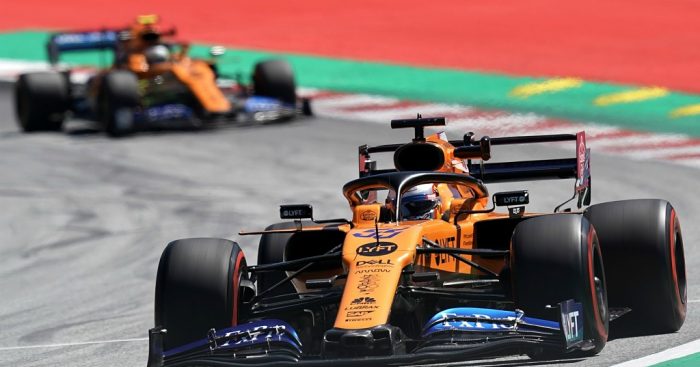 Carlos Sainz has said he is left with a “very sour” taste after his one-lap pace for McLaren in Austria is going to count for very little.

The Spaniard finished P5 in FP2 at the Red Bull Ring and was within half a second of pace-setter Charles Leclerc in the Ferrari on the same soft tyre compound.

But, showing that pace on a lap where he knows he could have improved is only going to hurt more for Sainz as he has exceeded his season limit for engine components and a grid drop is coming his way.

“Unfortunately today I am not [smiling] because I know what is coming tomorrow,” Sainz said.

“It will be quite a boring day with penalties coming but hopefully it will be a fun Sunday if we can find the pace like we had today then we can recover.

“We are preparing the run plan, the car, everything for Sunday and I still attempted one fast lap just to see how the car feels over one lap.

“I was P2 or P3 at the time and then P5 at the end without a perfect lap so it makes it very sour to deal with it but at least we know on Sunday we might have a chance to recover.”

Good to be amongst the top 7 cars even though it’s only Friday. My run plan was more race-biased due to the penalty but the pace was very good, which makes it a bit more painful!! It is what it is, so I’ll keep working to prepare Sunday! #carlo55ainz #AustrianGP@McLarenF1 @EG00 pic.twitter.com/laxEE61G1b

Lando Norris, meanwhile, was happy to log some crucial long run data for the team, on his way to completing the top 10 in FP2.

“On the whole, a reasonable Friday,” Norris concluded.

“It could’ve been a little better, and it wasn’t the cleanest of days with a few red flags here and there which changed everything around a bit.

“But we got a good understanding of the car: where it’s weak, where it’s strong, areas we need to improve. Overall, that’s the main thing.

“I focused a bit more on long running today, something I didn’t really do at Paul Ricard, and that helped me to get an understanding of the race balance for Sunday.

“We’re going to have look over things tonight and see how to improve the car for tomorrow.”