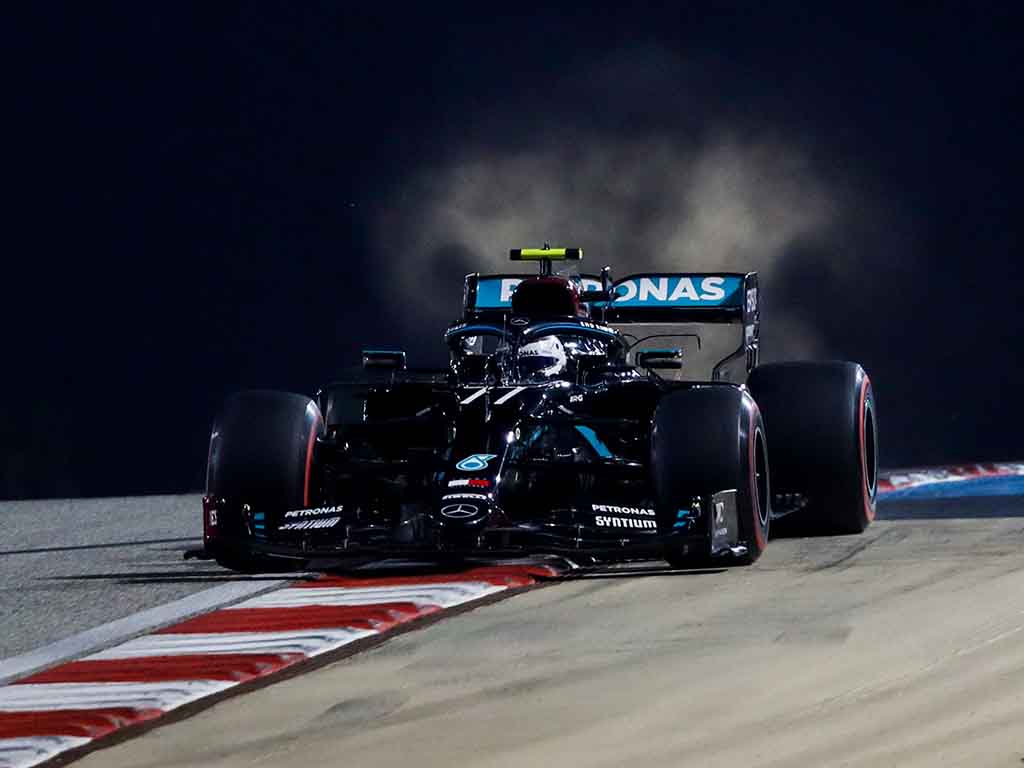 Valtteri Bottas held onto pole position ahead of the Sakhir Grand Prix by the finest of margins ahead of stand-in team-mate George Russell.

The Finn was on provisional pole ahead of the final Q3 runs and opened the door to both Russell and Max Verstappen after being unable to find further improvement on his final run.

But Russell fell agonisingly short by just 0.026s as the chequered flag waved and Verstappen had to settle for P3 despite being just 0.056s behind himself.

The most notable exit was from Alex Albon in Q2. Not great timing with his Red Bull future still very much on the line.

Given the very short circuit and track space at a premium, memories of the carnage seen at Monza 2019 were clear in everybody’s minds as 20 cars tried to wind up for their hot laps in Q1.

But surprisingly it was all very civilised for the first runs in Q1 where Verstappen put himself top of the pile with an early sighter – a 54.037 to pick up where he left off in the final practice session.

Debutants Jack Aitken at Williams and Pietro Fittipaldi at Haas, the latter due to start at the back of the grid because of engine penalties, both found themselves in the danger zone alongside Nicholas Latifi, Pierre Gasly and Antonio Giovinazzi ahead of the final Q1 laps.

Out of that group, Gasly and Giovinazzi were able to haul themselves out of trouble and that left Kevin Magnussen and Kimi Raikkonen being eliminated.

There was a nervy moment for Red Bull as Alex Albon, down in P15, scraped through to Q2 by less than a tenth of a second. Back up at the top, Bottas, switching to softs, was able to dislodge Verstappen in P1 with a 53.904.

Q2 gave an early indication into what tyres teams fancy starting the race on if they were able to make it through to Q3 and both Mercedes drivers, both Ferraris, and Max Verstappen were amongst those opting for medium tyre. You could add the Renault duo of Esteban Ocon and Daniel Ricciardo to that list.

Sergio Perez and Lance Stroll re-emerged from the pits with the softs strapped on and the former shot straight to the top of the timesheet with a 53.787. Just 0.053s separated the top five with five minutes left on the Q2 session clock: Perez, Bottas, Sainz (also on softs), Russell and Stroll.

In danger of being eliminated ahead of Q3 were: Ocon, Gasly, Vettel, Norris and Giovinazzi.

Norris out in Q2 after aborting his final run 😩

Norris had to abort two attempts at his final flying laps in Q2 and blamed himself on team radio for his exit. Ocon, Albon, Vettel, and Giovinazzi also all failed to make it through to Q3; Albon’s exit brought a shake of the head from Red Bull boss Christian Horner watching on.

Intriguingly, Verstappen switched to the soft tyres for the final part of Q2 to put himself on an alternative tyre strategy against Mercedes on race day. He also went P1 again, posting a 53.647.

Then, it was crunch time: Q3. Bottas was first to put the benchmark down and stuck a 53.760 up on the timesheet but that did not last long as both Verstappen and Leclerc (!) went quicker than the Finn. The Dutchman punched in a 53.591 and Leclerc, amazingly, was only 0.022s behind.

Mercedes responded by sending both Bottas and Russell back out with fresh soft tyres and it immediately resulted in normal service being resumed. Bottas lowered the target time to a 53.377 and Russell was a tenth away in P2. There was still time for one final round of hot laps…

Bottas couldn’t find improvement but Russell could…however it wasn’t enough to dislodge the Finn off pole position – just 0.026s separated the Mercedes duo and Verstappen was 0.056s. So close!