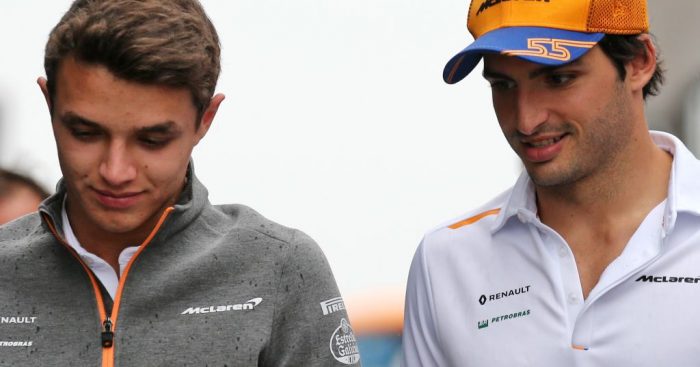 Lando Norris was frustrated by a scruffy final Q3 lap in qualifying for the Hungarian Grand Prix, despite it earning him P7.

The Brit will be joined on the fourth row of the grid by team-mate Carlos Sainz as McLaren resumed their best-of-the-rest status in qualifying, but he couldn’t quite allow himself to be satisfied following a few mishaps.

“I’ve been pretty comfortable in the car all weekend the majority of the time,” he told reporters.

“We found a set-up which maybe ultimately wasn’t the quickest, but I was just very comfortable in it and consistent so when it came to qualifying I could always make small improvements which is the thing that counts in the end.

“I almost managed to put the lap together, I’m not trying to be downbeat or anything, I am very happy with P7 and P8 for us as a team, But I ran wide out of the last corner, then I pulled DRS too early and it didn’t open, because it was too early, so there was a bit more in it.

“But in terms of lap time I don’t think we could have beaten [Pierre] Gasly, so it was a good result especially since here it’s hard to overtake, I look forward to tomorrow.”

Norris hopes to use the tight and technical Hungaroring to his advantage and make progress up the field in the race, but he knows a good start is crucial.

“We did some longer running on Friday, mine looked pretty reasonable, I think maybe we have a chance of beating some of the cars ahead of us, not on pure pace but more if we get a good start, because it’s difficult to overtake – we can maybe keep them behind better than on other tracks,” he explained.

“I just need to make sure I get a good start, have a good strategy and see how it plays out, but normally we’re reasonably good in the race.”

Sainz contradicted his team-mate in the belief that he only lost out to Norris by “half a tenth” in their qualifying battle because he produced a “perfect lap”.

“Definitely happy, not 100% but I think the way Lando drove today, when you are just half a tenth off and he has done a perfect lap, it’s easier to admit it and accept defeat in that way,” said the Spaniard.

“Congrats to him, to the team, because it’s been great to see that at a low-speed track the McLaren is also working decently and we are best-of-the-rest after a couple of races behind a Haas or an Alfa [Romeo] in qualifying.”

McLaren had been worried coming into the event that their performance deficit in slow-speed corners would hurt them badly.

But, that hasn’t been the case and Sainz is happy that it worked out that way.

“Yes, we were definitely worried and honestly the balance was not there, but today we have done the right steps and today we were in a better window,” he stated.