Home News Vettel had ‘no warning’ of FP2 engine failure 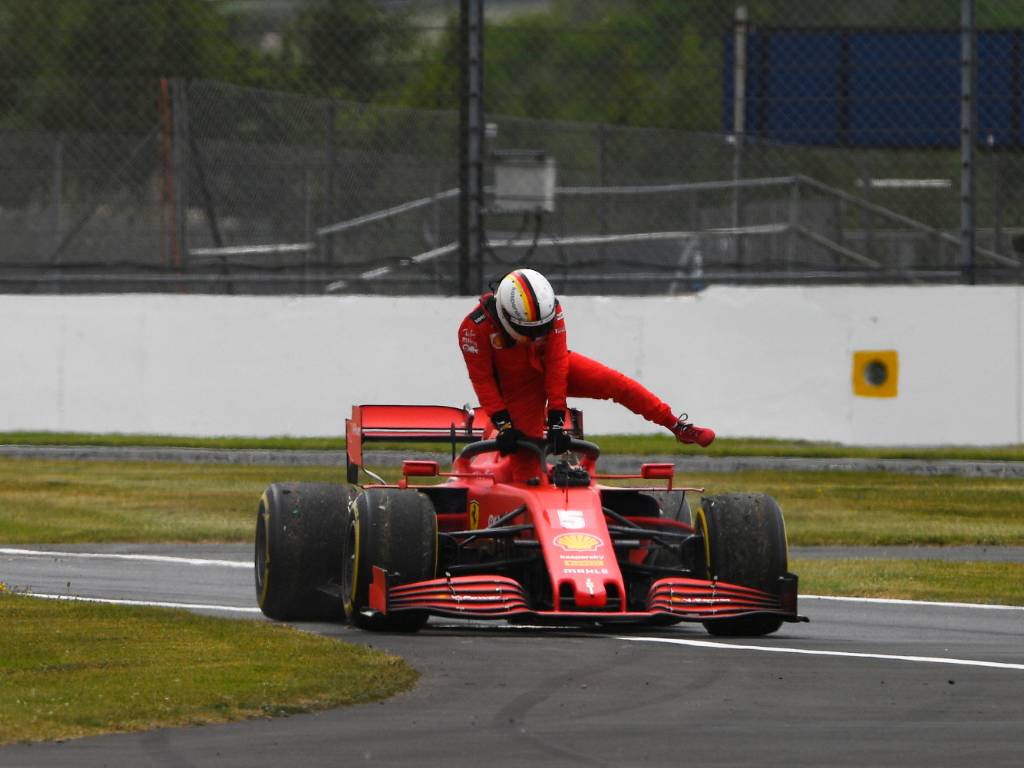 Sebastian Vettel’s flagging fortunes showed no sign of improving in free practice for the 70th Anniversary Grand Prix as he suffered a sudden engine failure in FP2.

The session was into its last few minutes at Silverstone when the Ferrari emitted a big ‘clunk’ down the old pits straight and Vettel was forced to pull over on the inside of Copse corner with fluid gushing from the underside of the car.

“Okay, big failure at the back of the car,” reported the German over the team radio, prompting the Virtual Safety Car before the session was red-flagged and terminated, with Vettel down in 14th position over 1.5sec adrift of Lewis Hamilton’s best time.

It has been a poor start to his last Ferrari season for Vettel, who has collected only 10 points from the first four races of the campaign – leaving him down in a lowly 13th position in the Drivers’ World Championship standings.

Problems for Seb in FP2, as his Ferrari came to a halt

“[I had] no warning,” said Vettel of the engine problem. “It was very sudden and obviously a failure so now we have to see what it is. But it will probably take a couple of days because the engine will get shipped back and analysed.”

In terms of his day as a whole, he added: “We tried a couple of things. Overall we were a bit more satisfied but not really more competitive.

“We can still try to improve the car but maybe those are small things. The car felt a bit better but we are not really faster. But at least the car feels better.”

Just as FP2 ended, Antonio Giovinazzi’s Alfa Romeo had also been parked up at the side of the track and there were suspicions that he too had suffered a problem with his Ferrari engine.

However, it was subsequently reported to be only a minor glitch.

Giovinazzi explained: “We managed to do at least one run during our qualifying simulation and a high-fuel run even though we had to stop the session with a minute to go due to a small technical issue.”

Vettel’s team-mate Charles Leclerc, meanwhile, was P7 in FP2 as he strives to build on his two podium finishes this term, including third position in last week’s British Grand Prix, which represent by far the most encouraging results for the Scuderia in 2020 so far.