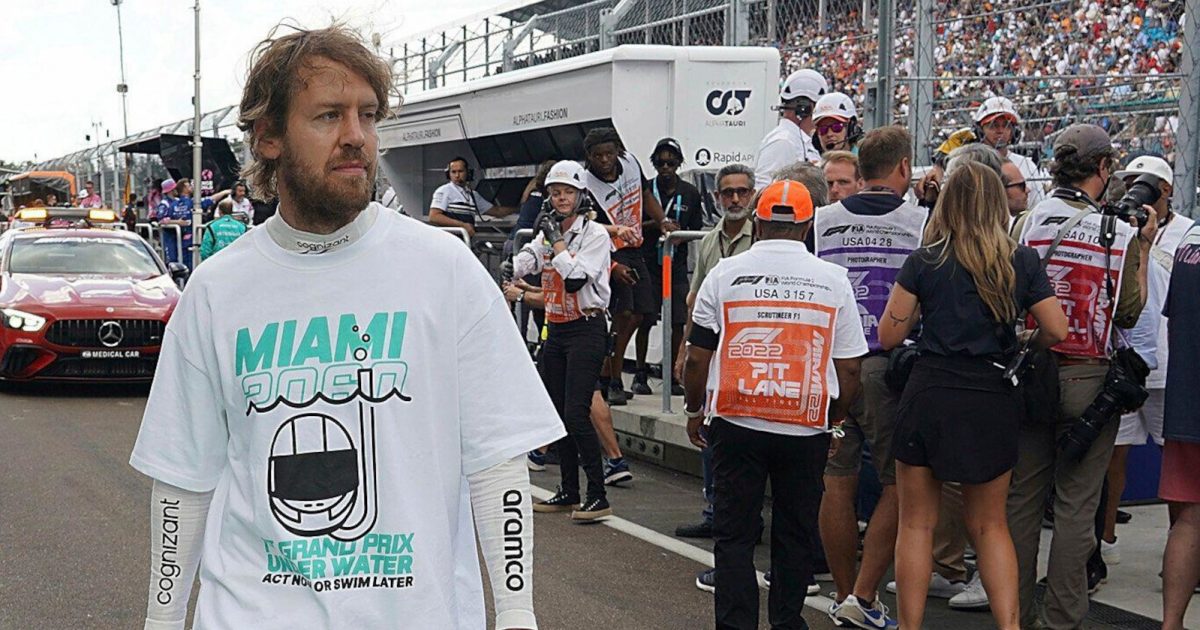 Sebastian Vettel admits climate change has him questioning his job racing in the “gas-guzzling” world of Formula 1.

The four-time World Champion has emerged has a staunch advocate when it comes to climate issues and, in Miami, wore a t-shirt warning that it could be the first grand prix to take place underwater as early as 2060.

The German was an unlikely guest on the BBC’s Question Time on Thursday night where, having spoken about the world’s energy crisis, he was called out for racing in a “gas-guzzling” series.

Asked if that made him a hypocrite, Vettel replied: “It does, it does, and you’re right when you [the studio audience] laugh because there’s questions I ask myself every day and I’m not a saint.

“It’s my passion to drive a car. Every time I step in the car, I love it.

“When I get out of the car, of course I’m thinking as well: ‘Is this something we should do, travel the world, wasting resources?'”

Seb Vettel on BBC #QuestionTime just now: articulate, honest, engaging, wise. I’m well chuffed, but not at all surprised. I knew how good he’d be. #BBCQTpic.twitter.com/ZOSMFwnFEV

But a different way of looking at it is that Formula 1 is entertainment with the 34-year-old saying “we were entertaining people during Covid.

“We were one of the first ones to start again, when everybody’s heads were about to explode.

“I’m not saying Formula 1 has this huge position in the world to deliver entertainment.

“And I think if we didn’t have that, in general, we’d probably go mad.”

Weighing in on the humanitarian crisis in Ukraine, Brexit, Partygate and Boris Johnson’s breaking of the law during lockdown, the Aston Martin driver’s main message was about the environment.

“We need to stop being dependent [on fossil fuels], and we can, because there are solutions in place,” he said.

“You know, in Britain, you have this sort of goldmine you’re sitting on, which is wind, and you have the ability to increase your energy supply with wind power, solar.

“Every country has its strengths and weaknesses.

“If you go to Austria, they have the Alps and they have water, they can pump it up, store it, take it back down.

“There’s things that I do because I feel I can do them better. Do I take the plane every time? No, not when I can take the car. But there’s certain things in my control, and certain things outside.”

He added: “Action should have been taken a long time ago. We shouldn’t depend on prices we don’t dictate.

“We have to shift into the next gear, not just for the reason of becoming independent but also to look after the bigger picture – that we live on a planet that’s as enjoyable as it is today.

“We should think of ‘peace energy’ or ‘freedom energy’, which is renewable energy. That is the future, not just as a way of protecting people who can’t afford bills but also to protect against the future.”