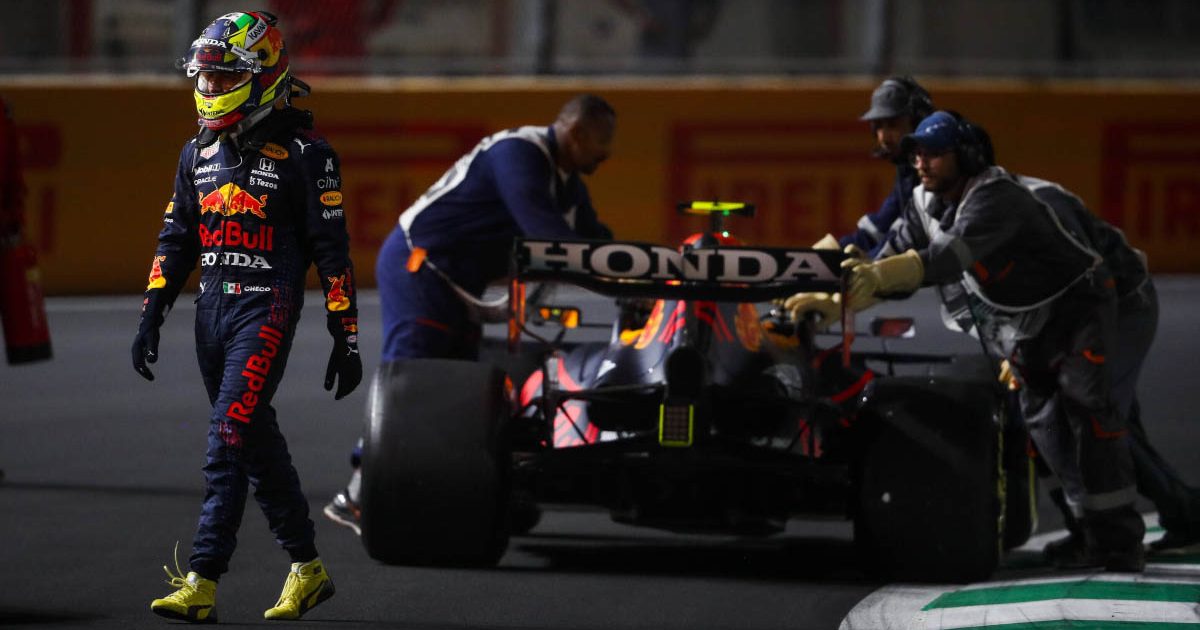 Sergio Perez admitted his DNF in Saudi Arabia “hurts a lot” given the ramifications in the fight for the Constructors’ Championship.

Perez retired from the race after making contact with Charles Leclerc following the restart from a red flag period in a controversial grand prix in Jeddah.

The Mexican stayed in his car for a period after the crash as he tried in vain to get the RB16B back up and running again, ultimately having to give up on doing so.

Having started P5, Perez was in the mix to compete towards the front and continue his team’s battle with Mercedes in the Constructors’ standings, but the double podium finish for their rivals left Red Bull with the unlikely task of overhauling a 28-point deficit in the final race of the season next weekend.

Perez admitted not much could have been done in that moment to avoid the contact with Leclerc at a frantic restart, and he said it was a “big shame” to get knocked out of a crucial race for Red Bull.

“It wasn’t the best weekend for the team, we lost crucial points in the Constructors’ Championship, so we are going to Abu Dhabi now to try and turn things around,” Perez told Red Bull’s official website after the race.

“We were slightly unlucky with the first red flag but we got away well after the second restart. We got past [Pierre] Gasly and Charles and as I was coming out of turn three, there just wasn’t enough room for everyone given how the corner was.

“I ended up tangling with Charles, he clipped my rear tyre with his front right tyre. It was a bad moment for everyone but just a very unlucky one.

“It’s just a big shame because we needed those points. I stayed with the car out on track because we were trying to turn the engine back on. We thought we could restart it but it was a bit on the hot side, so we had to retire.

“It was a very important race for the team so this one hurts a lot, but there is hope for Abu Dhabi. There is still optimism and something to fight for and we will give the final race of the season everything, so let’s look forward.”

On the other side of the garage, Max Verstappen took second place behind Lewis Hamilton in the race and the two drivers will head to Abu Dhabi level on points in the Drivers’ standings.