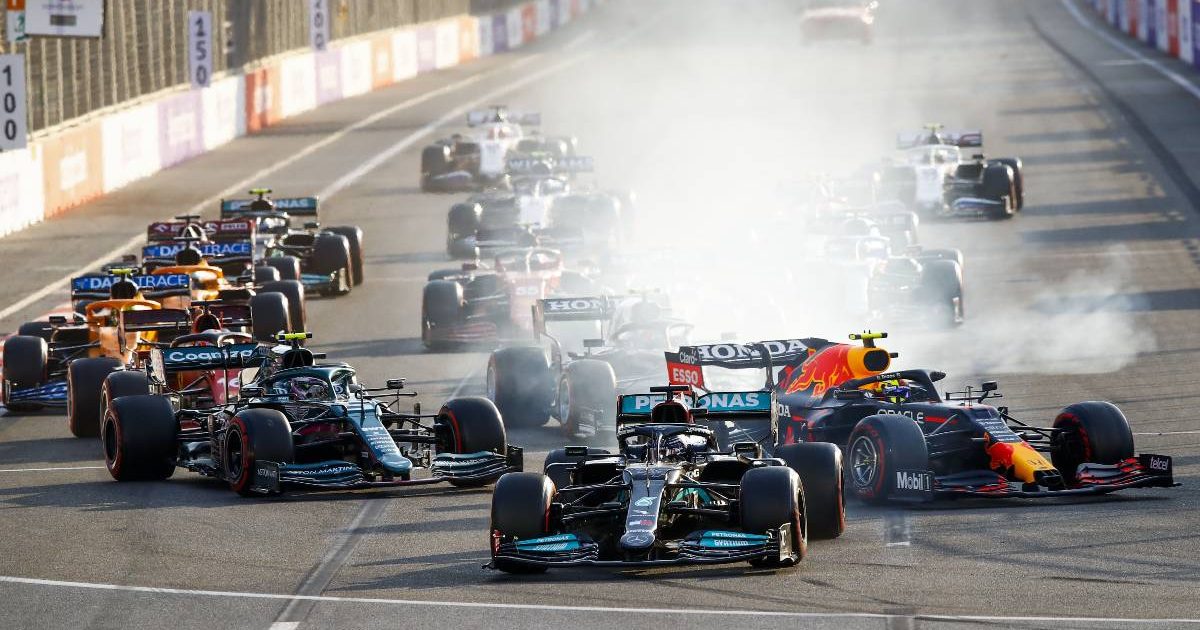 Sergio Perez was defending so hard against Lewis Hamilton throughout the Azerbaijan Grand Prix that he “couldn’t breathe”.

Qualifying remained a stumbling block for Perez in Baku, but he certainly made up for that with some lightning progress from P6 on the grid, swiftly putting himself in the leading pack alongside Lewis Hamilton, Max Verstappen and Charles Leclerc.

Perez’s first pit-stop was not great, but it was enough for him to jump Hamilton who was held in his box for a few seconds to avoid an unsafe release, but that was not the end of the story.

Much of the remainder of the race saw Perez defending against Hamilton, and that pressure was only relieved a few laps from the end as Hamilton went off at Turn 1, having accidentally flicked a switch that altered his brake balance.

At this stage, it was the lead that Perez was fighting to maintain, but with Hamilton finally out of the picture he transformed that into a first victory with Red Bull.

Understandably, Perez was exhausted after the race, although the Hamilton pressure became so intense that he “couldn’t breathe”.

“It was important to make progress for myself, quick progress, move on,” Perez told Sky F1 as he revisited the opening laps.

“I did a tremendous first lap, overtaking [Pierre] Gasly [and Carlos] Sainz, and from then on I just went with the leaders and the race came to us step by step.

“Unfortunately we had a very slow stop. I had a very strong in-lap, tremendous in-lap, I was I think nearly a second quicker than before.

“So maybe it would have been very close with Max. Certainly it would have given me a bit of freedom with Lewis to warm up my tyres.

“I came very close to him with cold tyres, and since then on it was flat out, lap after the other Lewis was on my tow, DRS, and it was really hard to keep him behind.

“I couldn’t breathe, I couldn’t get into a rhythm to manage my tyres at all and I was just having to be flat out lap after the other.

“And also looking after the fuel – it was a pretty exhausting race.”

Baku was, though, a huge step forward for Perez, and with a strong RB16B underneath him his hopes are high for the upcoming French Grand Prix.

“I think we have a very good car. I’m understanding it more, we have shown already in the last couple of races that we can be there in races and qualifying,” he explained.

“Putting everything together and just bringing that adaptation together is a process we are going through, learning race by race, but I think certainly we have done good steps.”