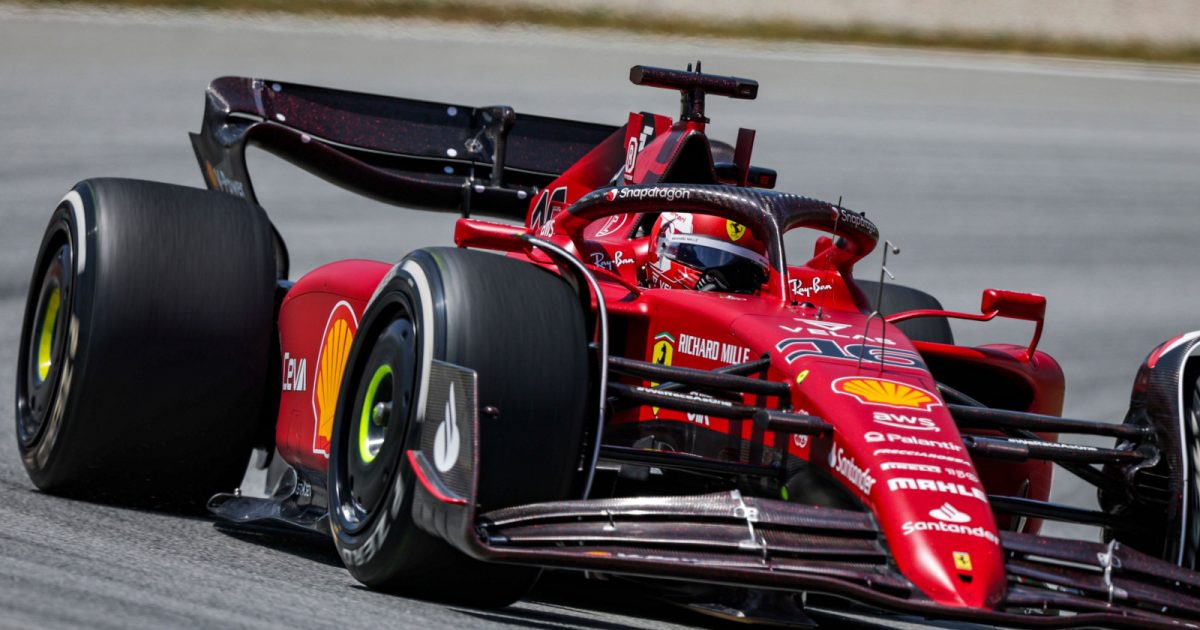 Charles Leclerc topped a Ferrari 1-2 in the opening practice session for the Spanish Grand Prix, an FP1 where the Scuderia had pace and Mercedes had very little porpoising.

The last time Formula 1 was in Barcelona it was a first group run in the all-new cars, this Friday it was a first look at a barrage of upgrades – McLaren’s MCL36 featuring a whopping 10!

From new floors to wings to Aston Martin’s controversial ‘Green Red Bull’, as it has already been dubbed, every team excluding Haas ran new parts.

And while it could be said that Ferrari’s 1-2 is a sign that their new anti-porpoising floor and rear wing have closed the gap on Red Bull’s lighter RB18, traffic meant Max Verstappen had to back off on his qualy-style flying lap.

He finished P3, three-tenths down on Leclerc with George Russell in his almost bounce-free W13 fourth fastest.

Out on the hard Pirellis for their first run, reigning World Champion Verstappen went quickest, Leclerc took over only for Verstappen hit back, the benchmark time a 1:22.394 after the first 15 minutes.

There were positive signs for Mercedes early in the session as neither Lewis Hamilton nor Russell seemed to have a lot of porpoising – and that was with the car’s ride height quite low to the ground.

As his rivals laid down the laps, Sebastian Vettel returned to the Aston Martin garage after just two tours of the circuit. Parking his AMR22 in the garage, Vettel hopped out while the team reportedly worked on an exhaust issue.

Valtteri Bottas, Kevin Magnussen and Robert Kubica also hadn’t set times while Yuki Tsunoda ran into trouble: “Something broke between my back and the seat.”

Back at the top Verstappen lowered the benchmark time to a 1:21.876 as he continued lapping on the hard tyres. The Red Bull driver, running a slimmed down RB18, was 0.870s faster than Leclerc with his new floor and rear wing.

Juri Vips, running for Red Bull in place of Sergio Perez as one of their two young driver outings for the session, was at the opposite end to his team-mate, P20, as Kubica, Vettel and Magnussen all made their mark.

First #F1 Free Practice laps on the board for Juri ✅ #SpanishGP 🇪🇸 pic.twitter.com/sf720OzXXl

The first driver to swap to the soft tyres, reigning Formula E champion Nyck de Vries, testing for Williams, went fourth quickest. Carlos Sainz joined him on the red Pirellis, comfortably quickest with a 1:19.907 much to the delight of his Spanish fans.

With more soft tyres runs coming, Russell went second with Lando Norris in his heavily revised McLaren up to third. And then came Verstappen… He went purple in the first sector, purple in the second, and then came storming up behind a traffic jam. “Beep!” as he went P2, a quarter of a second slower than Sainz.

Hamilton was another to trip up over traffic, the Mercedes driver having to take avoiding action as he came flying up to the rear wing of Fernando Alonso’s Alpine.

Leclerc, purple in the middle sector, took over at the front with a 1:19.828, a 0.079s up on his team-mate as he made it a Ferrari 1-2. Verstappen finished third ahead of Russell, Alonso and Hamilton.

De Vries finished the session 18th fastest, and a tenth up on Nicholas Latifi, while Vips was slowest of all as he ran a data gathering programme on full race fuel. Robert Kubica, P13, was fastest of the testers.