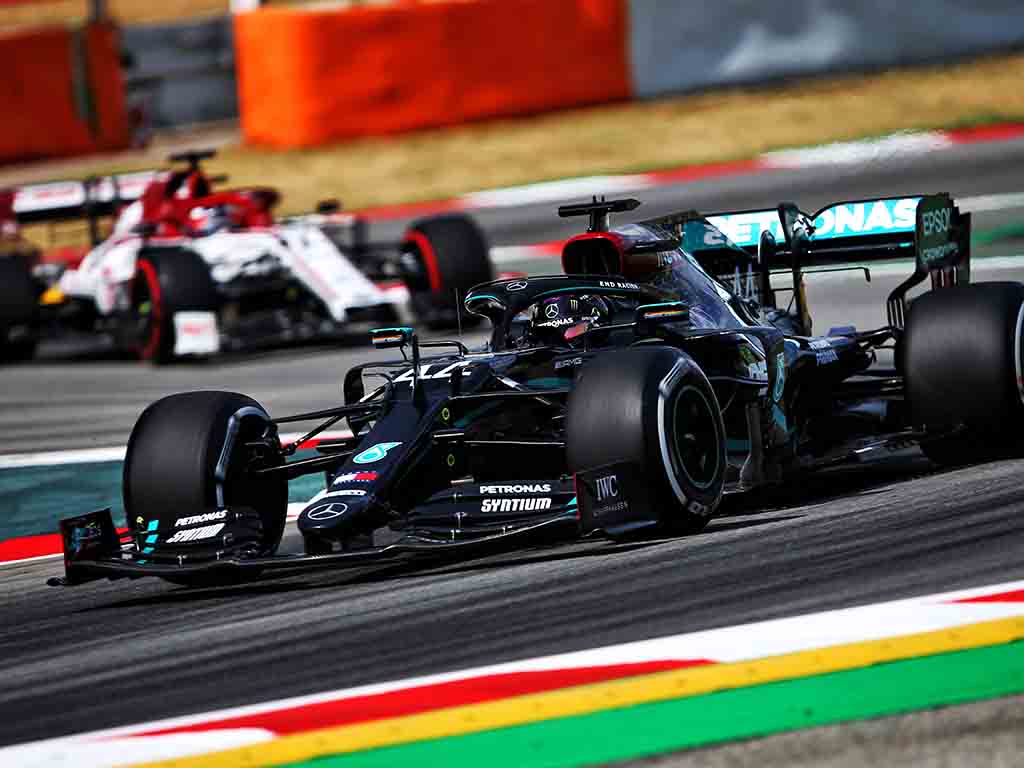 It continued to be business as usual for Mercedes in Friday practice with Lewis Hamilton heading up yet another Silver Arrows one-two in Spain.

Valtteri Bottas topped first practice with Hamilton P2, but the roles reversed on Friday afternoon as the reigning World Champion topped the timesheet with a 1:16.883.

Bottas was two tenths behind his team-mate and Max Verstappen, unsurprisingly, was the closest driver to the Mercedes duo – although he was eight tenths down overall.

Daniel Ricciardo was just a tenth slower in P4, while another eye-catching time came from Haas’ Romain Grosjean in P5. He managed to pip Ferrari’s Charles Leclerc on his way to those lofty heights.

Rounding out the top 10 were: Carlos Sainz, the returning Sergio Perez, Esteban Ocon and Pierre Gasly.

The notable names featuring on the bottom half of the timesheet were Sebastian Vettel in P12 and Alex Albon down in P13.

The baking hot temperatures remained firmly in place at the Circuit de Catalunya on Friday afternoon as teams collected more valuable data on those much-talked-about tyres ahead of Sunday’s race. Track temps were nudging 50 degrees when track lights went green.

After the first 30 minutes of the session, the familiar top three of Hamilton, Verstappen and Bottas was already well established. Hamilton set the early pace with a 1:17.970 on the medium tyres, with Verstappen four tenths off the pace also on the mediums.

Bottas, six tenths behind having run the hard tyres in his opening stint, was first of the big boys to dive into his qualifying simulation and, on the softs, took eight tenths out of Hamilton’s initial best time with a 1:17.170.

The tyre temperatures were so high that Mercedes instructed Bottas to do two cool-down laps in his black W11.

Hamilton, though, was able to beat Bottas’ benchmark at the first attempt as he pumped in a 1:16.883. Bottas, after his two cool-down laps, was three tenths down on his best time to add further weight to the theory that no improvement can be found between two clean laps on the softs. Hardly revolutionary thinking, we know!

Verstappen, one of the last to complete his first qualy sim lap, wrestled P3 away from his former team-mate Daniel Ricciardo but was a distant eight tenths down on Hamilton. There was just one tenth separating Verstappen and Ricciardo.

Alex Albon, meanwhile, was not making any impression on the top six after his first run, a scruffy lap ensuring he stayed outside the top 10 in P13 with Vettel and Norris for company.

Teams quickly moved on to their race simulations and a rather ominous radio message came from Valtteri Bottas with 30 minutes of the session remaining:

Not everyone was enjoying the tyres, though, with poor George Russell, propping up the rest of the field in P20, said it was like  “driving on ice” as he limped his way around the track in the FW43.

Inside the final 10 minutes, Grosjean was forced to end his afternoon running a little earlier than planned as his Haas started to cough and splutter in the middle sector.