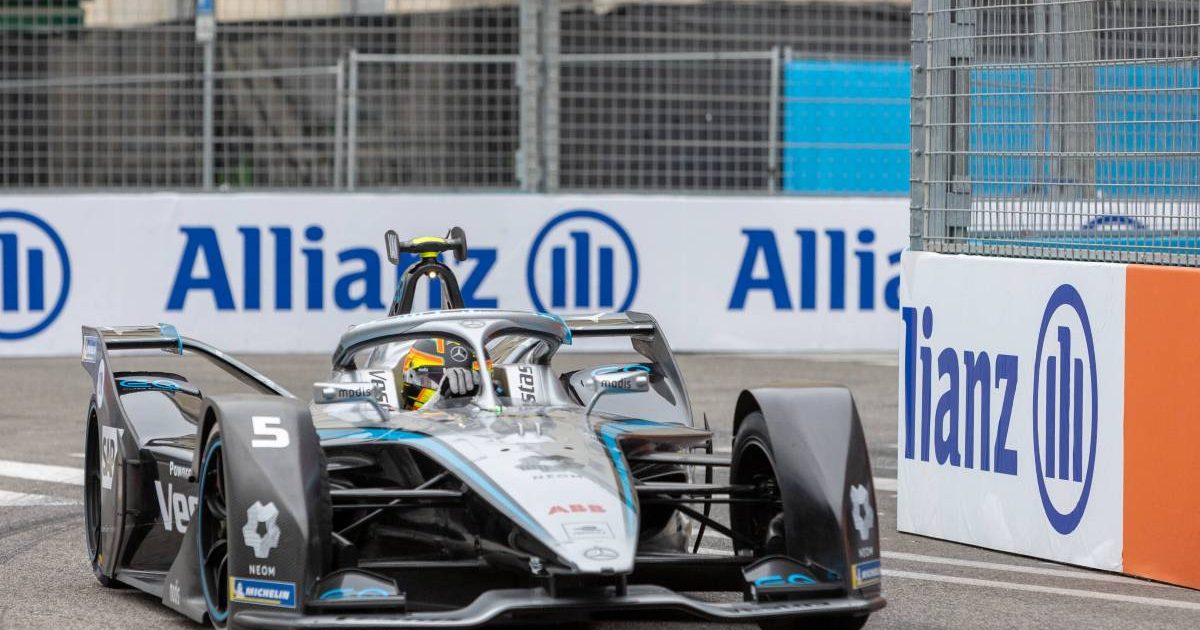 Mercedes Formula E driver and Formula 1 reserve Stoffel Vandoorne secured his first win of the season in race two at the Rome ePrix.

The opening race of the weekend at the Circuito Cittadino dell’EUR saw Vandoorne finish in the barriers after a collision that also involved his Mercedes team-mate Nyck de Vries, but the Belgian bounced back in style by finishing the weekend atop the podium.

There was drama after the Safety Car start around a damp Rome as Nick Cassidy, starting from pole, spun his Envision Virgin Racing car while leading on the opening lap.

Starting from P4, that aided Vandoorne’s path to the front in a race he would go on to control as he steamrollered his way to the finish line.

From the lead, @NickCassidy_ spins out and rejoins in the midfield…

Race one in Rome had started behind the snazzy Mini Cooper Safety Car as drizzle made for a very slippery track, and the second race of the weekend began in the same fashion.

Cassidy would have wished he could have pressed restart though after he spun at Turn 7 once the Safety Car released him at the head of the pack. Instead, as he tumbled down the order, Norman Nato and Pascal Wehrlein were presented with a clear path into P1 and P2 respectively.

A software glitch was to blame, said Cassidy, and just to further ruin his afternoon he was later shoved into the barriers by Oliver Rowland, dropping Cassidy all the way to the back of the grid.

Rowland was later hit with a 10-second time penalty for his efforts.

Back at the front, it was Vandoorne making moves as he activated his first attack mode. To do so means going off-line and sacrificing track position, but the resulting power boost is a welcome reward. Wehrlein chose to hold fire, but that cost him once he finally pulled the trigger as Vandoorne took over the lead.

.@AlexanderSims reported to the stewards for mugging @PWehrlein on the restart 😉

Great move from the @MahindraRacing driver for 2nd

By the time Alexander Sims had pinched P2 from Wehrlein at the end of a Full Course Yellow, triggered by a coming together between ex-F1 racers Sebastien Buemi and Lucas di Grassi, Vandoorne was already five seconds up the road and clear to activate attack mode for the second and final time.

Rene Rast’s crash threatened to unravel all of Vandoorne’s hard work as the Safety Car emerged again. But aided by Fanboost, Vandoorne was able to retain P1 as the race restarted for one final lap, while behind a fierce battle broke out for the remaining podium places.

De Vries found himself in trouble again as he was wiped out during a battle with Rowland and Sam Bird, who had gone into the race leading the championship, but out in front the track was clear for Vandoorne to take his first victory of the season.

Sims claimed P2, only six tenths adrift of Vandoorne, while Nato thought he had completed the podium only to be disqualified for being too greedy with his energy usage. That meant Wehrlein was classified P3.

Speaking after the race, Vandoorne said: “Today is good to take home the victory. It feels like we needed this yesterday, especially after the pole position and the speed we showed.

“But I kept believing, was confident in the car again today and made the moves when it counted, and the team did a perfect strategy with the attack mode. In the end it made my life a little bit easier to have that gap with Sims behind.

“He was kind of catching [up] at the end, so with the Safety Car I wasn’t quite sure what to expect, but I had my Fanboost left and used it on the last lap to be able to defend that position.”

Reflecting on Vandoorne’s victory, Toto Wolff, part-owner and team principal of the Mercedes Formula 1 team, said: “Drama and glory is very close together in Formula E.

“It’s crystal ball reading when you try to think what is happening. Yesterday we saw Stoffel having a solid lead and then a bit of an optimistic manoeuvre from behind and all is lost, and then add that to the crash that was not of their [Vandoorne and de Vries’] making.

“Then today he is back on top.”

Vandoorne now moves up to P4 in the drivers’ standings with 33 points, 10 behind Bird who remains atop the standings after Rome.