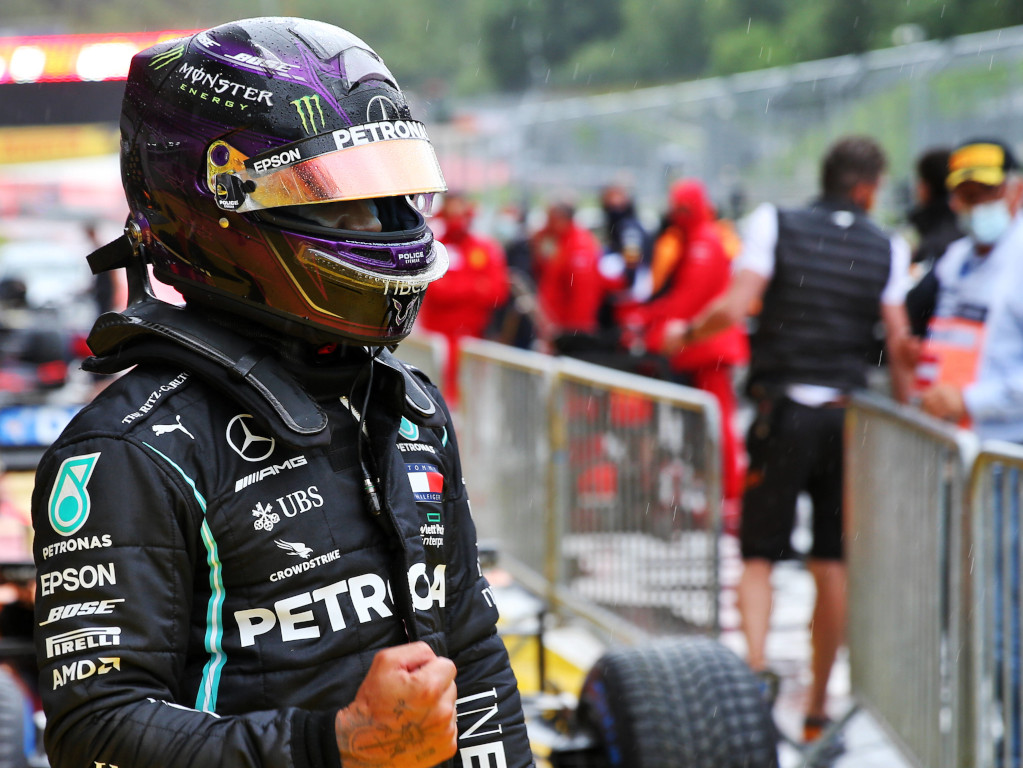 Lewis Hamilton had a trouble-free Sunday, racing his way to the Styrian GP victory as Charles Leclerc took Sebastian Vettel out on the opening lap.

With Saturday’s qualifying taking place in the wet, the drivers had the freedom to choice their starting tyres with the top ten, excluding Daniel Ricciardo and Sebastian Vettel, all on the soft tyres. Daniil Kvyat, Kimi Raikkonen, Nicholas Latifi and Antonio Giovinazzi also went with the mediums. Romain Grosjean started from the pit lane having incurred a penalty, but avoided a DSQ, for breaking parc ferme rules.

As to be expected, Hamilton made an epic start from pole position to lead ahead of Max Verstappen who had a brief tussle with Carlos Sainz. Valtteri Bottas was fourth with Alex Albon taking P5 off Esteban Ocon.

Further down the grid Vettel and Charles Leclerc made contact with the German suffering a broken rear wing in the drama. Vettel was squeezed in the midfield with Leclerc coming up on his right side through Turn 3, mounting a bit of kerb and taking off Vettel’s wing with his tyre.

With his rear wing hanging on by a miracle and debris on the track, the Safety Car came out as Vettel returned to the pits with Leclerc also pitting. Leclerc rejoined the race in last place with a new front wing and hard tyres on his SF1000, Vettel retired the car.

“Guys, we’re on row 5. That’s not what Ferrari is. Make sure to come home with a good result.”
– “Copy”.
36 seconds in: pic.twitter.com/fZWHEhkhBq

George Russell, who started P11, found himself in the thick of it and fighting Kevin Magnussen after the restart as his Williams went flying off the circuit. He dropped to last. Moments later Leclerc pulled into the pits to record a double DNF for Ferrari.

Unfortunately both cars had to retire. #Seb5’s car had too much damage and for #Charles16 it would have been too dangerous driving with the floor in those conditions. #AustrianGP🇦🇹 #essereFerrari🔴 pic.twitter.com/5MvELBzLl8

Back at the front Bottas passed Sainz for position with Albon following him through. The McLaren driver falling to P5 by lap 9. Behind them Ricciardo let Renault know that he was faster than Esteban Ocon despite his team-mate being ahead of him. Pierre Gasly was running eighth ahead of Lance Stroll and Lando Norris, make that Sergio Perez.

Strangely Renault did not order its drivers to swap positions with the two Renaults losing ground to Sainz while being caught by Stroll, who had got past Gasly. Ricciardo tried to pass Ocon around the outside on lap 17 but the Frenchman fought back and retained the position giving Ricciardo the squeeze in the process. Ricciardo made the move at Turn 4 two laps later and it stuck. Gasly’s fall down the order continued with Perez passing the AlphaTauri driver before Norris booted him out of the top ten.

25 laps into the 71-lap race and Verstappen was the first of the top ten to pit, swapping his soft rubber for fresh medium tyres. He dropped from second to third, coming out ahead of his team-mate Albon. The next into the pits was Ocon, however, he didn’t leave, retiring his RS20 with smoke billowing from his brakes. Hamilton pitted from the lead on lap 27, coming out second behind Bottas who had yet to stop.

Unfortunately for Sainz his pit stop wasn’t as smooth as those who stopped ahead of him. A rear left wheel nut issue meant he was stationary for about three seconds longer than usual. He lost to Stroll in the stops. Bottas stopped on lap 34, pitting from the lead and coming out behind Verstappen in third while Albon was the next of the top four to pit.

As the stops continued, Ricciardo pitted ahead of Perez with the Aussie coming out three seconds behind Albon while Perez was all over the back of Sainz and passed him around the outside of Turn 5. Norris was the last of the top ten to stop. Perez’s next storming pass was on his own team-mate, Stroll, muscling his way through on lap 46, while four laps later he took fifth off of Ricciardo, and did so with ease. Ricciardo was a tougher challenge for Stroll, the Canadian unable to find a way through.

With 15 to go Hamilton led by six seconds ahead of Verstappen who was seven in front of Bottas but nursing a front wing with a flapping endplate. Mercedes informed its Finnish driver that “with this pace we will catch him on the final lap”. Of course catching is a lot easier than passing. His engineer added: “There will be opportunities, this is good stuff Valtteri. I will be quiet, you push.”

📻 “With this pace we’re going to catch him on the last lap.”

Albon in turn was being caught by Perez who put in two fastest laps to close the gap to just over a second. Half a second on the next lap as they came up behind an AlphaTauri, 0.7 on the next as the AT driver moved out of the way with the gap sticking there for several laps. Norris caught his team-mate Sainz in the battle for eighth, the Brit enjoying his medium tyres a lot more than Sainz was liking his. McLaren made the swap to see if maybe Norris had the pace to catch Stroll for seventh or even Ricciardo for sixth.

Bottas closed the gap to Verstappen to under two seconds with the Dutchman complaining about the driveability of his RB16. Perez put in a new fastest lap on lap 63 to apply the pressure on Albon. Stroll was all over the back of Ricciardo and Norris pulled away from Sainz, taking over fastest lap on lap 66. Bottas made his first attempt on lap 66, going around the outside of Turn 4. Verstappen fought back, around the outside of the Finn, and retook P2. Hamilton, not bothered by what was going on behind him, laid down a fastest lap time.

Lap 67 and the battle for second was back on. Bottas tried outside the outside of Turn 4 with a bit of help from DRS. This time it worked for the Finn, handing Mercedes a 1-2 at the Styrian Grand Prix.

Brilliant stuff from Verstappen and Bottas

Max holds off Valtteri before the Finn finally gets past and up to P2 #AustrianGP 🇦🇹 #F1 pic.twitter.com/pbpl1mQJwe

Verstappen and Sainz both pitted late in the race to go for the fastest lap point as neither could be caught by the car behind. Verstappen pitted from third, came out third. Sainz pitted from P9, came out P9. Sainz went fastest to bag the point. Perez tried to attack Albon but broken his front wing. Stroll overtook Ricciardo, Norris jumped through the gap too and then tried to overtake Stroll but couldn’t make that one work.

Hamilton raced to a trouble-free first win of this season ahead of Bottas in Mercedes first 1-2 at the Red Bull Ring since 2015. Verstappen was third ahead of Albon.

Norris made a last lap pass on Stroll and then Perez, who was nursing a damaged car, to take fifth for McLaren ahead of Perez and Stroll. Ricciardo was eighth while Sainz and Kvyat completed the points.

Russell wasn’t able to turn his P11 grid slot into points, finishing the grand prix in 16th place with only Nicholas Latifi behind him.