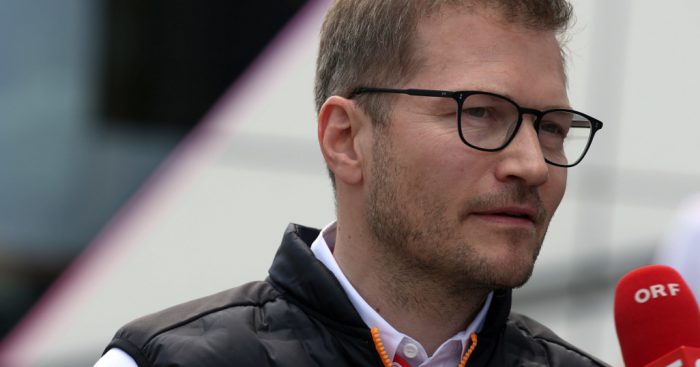 F1 drivers and teams should stop complaining about the recent penalties, after all the stewards are only enforcing the rules that they wanted says McLaren boss Andreas Seidl.

First Sebastian Vettel was denied the Canadian GP win through a five-second penalty for an unsafe return then Daniel Ricciardo was hit with two penalties, taking away with seventh place in France.

One week later and this time it was the lack of a penalty that had some up in arms as the stewards ruled Max Verstappen’s move on Charles Leclerc for the Austrian win, in which the Ferrari driver was pushed off the track, was a racing incident.

Seidl says the teams and drivers are to blame as they badgered the FIA to lay down the rules and are now complaining when they don’t agree with them.

“For me it is a bit like the tyre discussions,” he told Motorsport.com equating the penalties to some teams wanting to change back to the 2018 Pirelli tyres.

“The rules we have in place are the result of team bosses and drivers asking for these rules.

“So this is why I think we have to accept we have these rules now.

“We have to trust the stewards that they make the right decision.”

Following the recent spate of penalties, there has been talk about shaking up the rule book in time for 2021.

Seidl, however, says if that were to happen, it should be left to the likes of F1 sporting boss Ross Brawn to decide the regulations.

The McLaren team boss explained: “My opinion, and it is also for the regulations, technical, financial and sporting which are being developed at the moment, it should be a consultative approach that teams get asked for their feedback.

“But there should be a strong authority from the FIA and from F1 to go the way that they think is the right one.

“We have this unique opportunity in F1 and the FIA at the moment where we have very, very strong and experienced guys that have recent F1 experience, which is unique.

“I think they have never been that strong in the past in terms of their own knowledge – with Ross [Brawn] and [Nikolas] Tombazis – so they know exactly what needs to be done in terms of achieving the objectives which we all agree on.

“We are really in favour that they should pull through now with the direction that they have put in the current proposals of the regulations, because we are convinced this would be the right thing for the sport.”