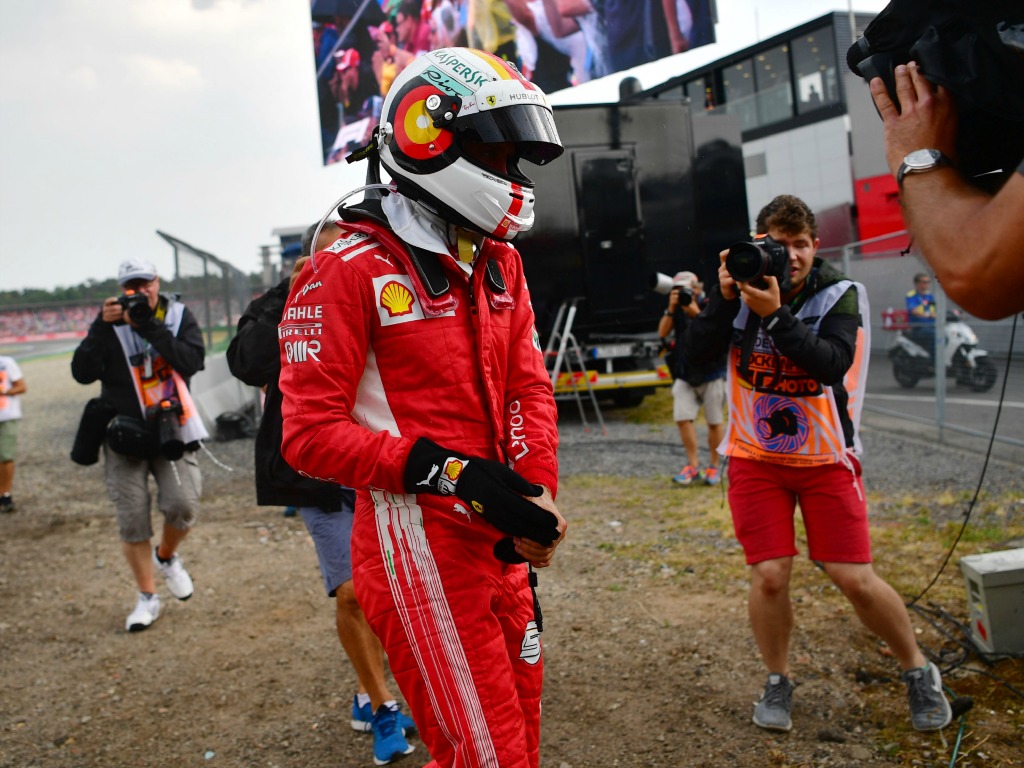 Rain at the Hockenheimring led to Sebastian Vettel crashing out of the German Grand Prix, taking away what looked like a nailed-on win for the home favourite.

The German had been leading the race after getting past team-mate Kimi Raikkonen on Lap 39. However, the Ferrari man went straight on at the Sachs Curve, giving away a crucial 25 points.

Lewis Hamilton needed no invitation to take the victory and move ahead of Sebastian Vettel and 17 points clear at the top of the Drivers’ Championship.

Sunday afternoon saw the German Grand Prix take place for the first time since 2016. It has been a Ferrari circuit over the years, and with a German in a Ferrari on pole.. Surely they were going to add to the record.. right?

No team has won the same event more times than @ScuderiaFerrari

Over the years, they've racked up 21 victories at the #GermanGP

Could there be another one on the way? 🤔 pic.twitter.com/PECQ5mgt6B

Further down the grid (with what was a challenger once), Williams were celebrating a milestone at the Hockenheimring on Sunday.

Good morning everyone. It’s race day at the #GermanGP and to top that off, it's also our 700th Grand Prix!

This milestone would never have been possible without you, our fans!

Tell us how and where you’re supporting us from today 😊 #700GP #F1 pic.twitter.com/HoYVGgdiIF

Also towards the back were two of the big hitters. Lewis Hamilton started the race from P14, with Daniel Ricciardo starting from P19. Pierre Gasly also took engine penalties early on Sunday morning, moving him to the back of the grid.

He'll join fellow Red Bull family member Ricciardo at the back of the grid#GermanGP 🇩🇪 #F1https://t.co/yZHTgUD4OO

There might not be a ‘shoey’ at the end of the race on Sunday, so Daniel Ricciardo made sure he got one on Saturday evening, after qualifying. You just gotta hope that the shoe is the fan’s…? 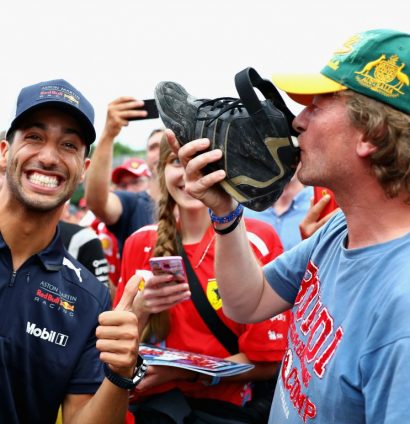 They would also have wanted the weather to arrive, as will most of the midfield runners, and the Red Bulls. However, the sun started to come out half an hour before the race.

It's looking warm and dry at the Hockenheimring

But there are some ominous-looking clouds lurking around ☁️#GermanGP 🇩🇪 #F1 pic.twitter.com/VK21ROcCut

The twenty drivers were all racing for one goal, the German Grand Prix trophy! But having seen it, maybe they won’t want to finish on the podium this weekend…

My eyes! My eyes! #F1 pic.twitter.com/mdEikQWTW6

The top four got away well, and started to make the move away from the field, but Kimi was quickly on the radio… 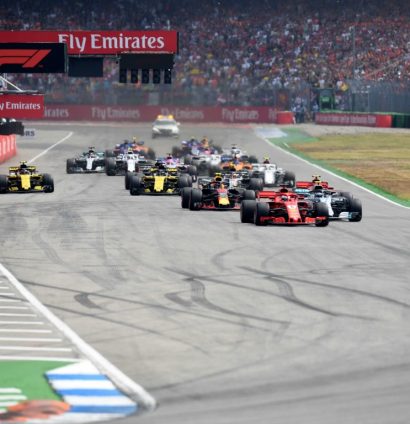 The battle between Nico Hulkenberg and Sergio Perez came once again.. And no one seems really sure how many times the two have been close.

Kimi Raikkonen was the first man to blink, with the Finn coming in on Lap 14. A change of strategy for Ferrari?

Kimi boxes from P3. Re-joins just ahead of HAM in P4 on new Soft…

There was almost a four-car coming together at the hairpin after the pit stops, as the midfield runners tried to get past the slower cars.

Stroll catches out Grosjean, who backs off and is tagged by Sainz#GermanGP 🇩🇪 #F1 pic.twitter.com/6PrLKjazzc

Yellow flag is out, as Ricciardo pulls over and retires 😭

For his former team-mate, things were getting a bit heated under the lid.
Sebastian Vettel wanted to get past his current team-mate, as the pair were on different strategies.

The polesitter is a second adrift of teammate Raikkonen

The rain arrived with 20 laps to go, with Max Verstappen the only man of the top five to go early for the intermediate tyres.
Meanwhile, Sebastian Vettel lost a bit of his front wing, but it did not seem to stop his progress.

Sebastian Vettel crashed out of his home grand prix in the rain, locking up at the Sachs Curve and heading straight on into the barrier.

VETTEL CRASHES OUT OF THE LEAD IN GERMANY 😱#GermanGP 🇩🇪 #F1 pic.twitter.com/8RVdIKoptZ

Within three laps of the Championship leader retiring, both Williams also dropped out of the race. Sergey Sirotkin stopped out on track, while Lance Stroll brought his car into the pit lane and parked it in the garage.

On the restart from the Safety Car, Valtteri Bottas went on the attack to try and take the lead from his team-mate, with the Mercedes pit wall not fancying a look.

Carlos Sainz was given a ten-second time penalty for overtaking under the Safety Car, with the Renault Twitter feed not happy with it..

Penalty for Carlos; 10secs for overtaking behind the safety car. 😐 He is currently P10. #RSspirit #GermanGP

Meanwhile, Lewis Hamilton went on to win the German Grand Prix, from P14, the lowest ever grid slot he has taken victory from.