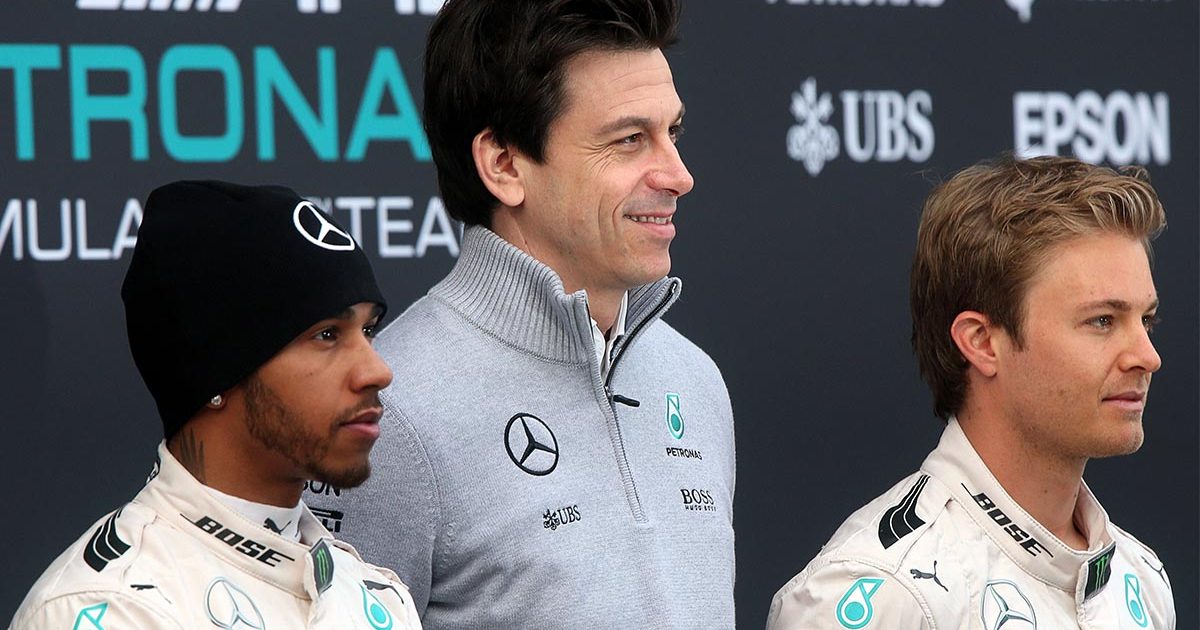 Lewis Hamilton has joked Toto Wolff “pulled out parts of his hair” and went ‘bald’ when the World Champion crashed with Nico Rosberg at Barcelona in 2016.

During their four years together at Mercedes, Hamilton and Rosberg were often the storyline of each race weekend as the two battled endlessly against each other, often going against team orders just to get the better of the other.

Inevitably, that led to clashes on and off-track, perhaps none more memorable than at the Spanish Grand Prix in 2016.

With Rosberg leading on Lap 1, Hamilton tried to squeeze his way past his team-mate on the inside, but the German came across to protect his position and the now seven-time World Champion ended up spinning into his Mercedes colleague, leaving both of them in the gravel and out of the race.

Perhaps unsurprisingly, that was the angriest Hamilton has seen team principal Wolff.

Discussing the incident on a Mercedes YouTube video, Hamilton said: “The angriest I’ve ever seen Toto is probably…it would have been one of the times Nico and I crashed into each other. Barcelona’s probably the angriest he ever got.”

“Yeah…well, yeah,” he smirked when asked by Valtteri Bottas if Wolff was fuming. “I definitely saw bald patches. I think he pulled out parts of his hair and had to get turf to grow it back!”

Those famous paddock close-ups of Wolff have not just come from Hamilton though, with team-mate Bottas also recalling a moment of anger from his boss.

He pinpointed Mercedes‘ 200th grand prix in Formula 1 as the height of that anger, on the day the team dressed up in retro outfits, including the team principal himself who showed up in braces and a fedora.

It was not a day to celebrate in the end though, with both Hamilton and Bottas sent spinning and Wolff said at the time “it simply could not go much worse”.

Bottas said: “I think he wasn’t so happy in Germany 2019. We didn’t get any points for the team.

“When I crashed, yeah, I was on to get at least some points and I shunted.

“We were all wearing these special outfits and then I remember him sort of saying after the race that’s the last time we’re gonna play carnival at a race weekend.”