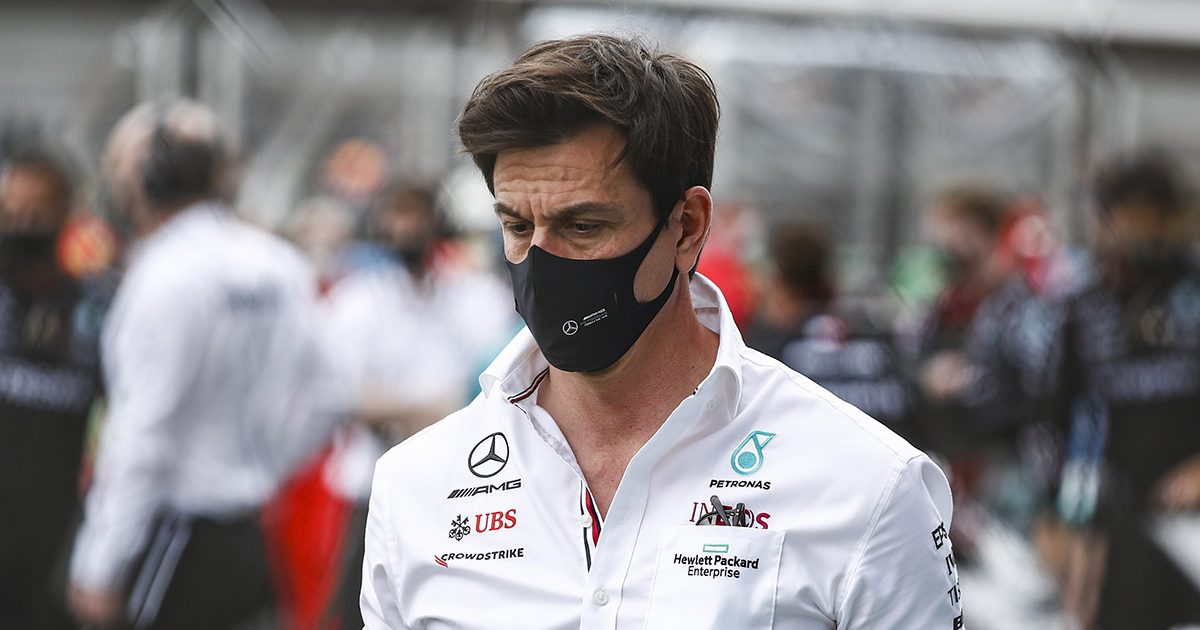 Heading into round six of the 2021 World Championship, where Mercedes has lost grip on both title fronts to Red Bull, Wolff feared that the Baku street circuit would not play to the strengths of the W12.

And, on Friday, those fears came to life as both Mercedes drivers failed to light up the timesheets in both practice sessions.

In first practice, Lewis Hamilton (P7) was seven tenths down on the pace set by Max Verstappen and Bottas was a further second back down in P10.

It got no better for either Mercedes driver in FP2, Hamilton slipping down to P11 and a second off leader Sergio Perez, while Bottas was pegged back to P16. Neither of them finding improvement during their qualifying simulation runs.

As a result of the dismal day, Wolff was straight into debrief mode rather than heading into the paddock area for his usual post-session interviews.

“Toto Wolff has declined to come out and speak to any media,” Sky F1’s Simon Lazenby reported from Baku. “We can understand that.

“He’s gone straight to talk to his engineers to try to find out what on earth has happened [today].”

That meant it was over to Red Bull’s Christian Horner to discuss Mercedes’ woes on the opening practice day, that was just before telling Wolff to “keep his mouth shut” over the front and rear wing saga between the two teams.

“You can see it on the overlays that we do that Mercedes are struggling on the slower parts of the track,” Horner said.

“Alternatively you can see Ferrari are very strong there so [for us] it’s just about trying to be consistent across all variants of corners but I do think we have a reasonable balance.”

Sky F1’s Paul di Resta also suggested that the warmer temperatures are playing their part again, a known factor which has worked against the Mercedes car in the past.

“It is that little bit warmer and it maybe just takes the car out of its window,” Di Resta said.

“If they qualify P7 or P8 or half the deficit to where Red Bull are, that doesn’t make Mercedes comfortable for the race even with a faster race car. They are so out of position even though you can overtake on this track.

“Both [Mercedes] drivers walked from back of the garage to their rooms with their helmets on. They didn’t want to be stopped and quizzed.

“And Toto Wolff was in a pretty sharp march to get himself up in that office. They will be here the latest tonight.”

Once Wolff had though conducted a debrief with his Mercedes colleagues, the Austrian told Motorsport-Total.com that while the Silver Arrows do have a strong race car, all of these 90 degrees corners in Baku are not helping them over one lap.

In fact, Wolff said there is something “fundamentally wrong” with the W12, and so thinks it could be Mercedes’ most difficult qualifying in his time there, stretching back to 2013.

“We have a strong race car, but we are struggling to get it for one lap. It is the same as we have seen in Monaco, we don’t deliver in some sections, and it seems to continue in Baku,” he said.

“There are only 90-degree corners here, so it was always clear that it would be difficult for us. You can clearly see in the lap times that something is fundamentally wrong. We are now trying to tune the car so that it works.

“Probably qualifying will be one of the most difficult session I have ever seen for us. It reminds me of Singapore 2015.”