Home News Wolff warns Ferrari: ‘If they drop the ball, we are there’ 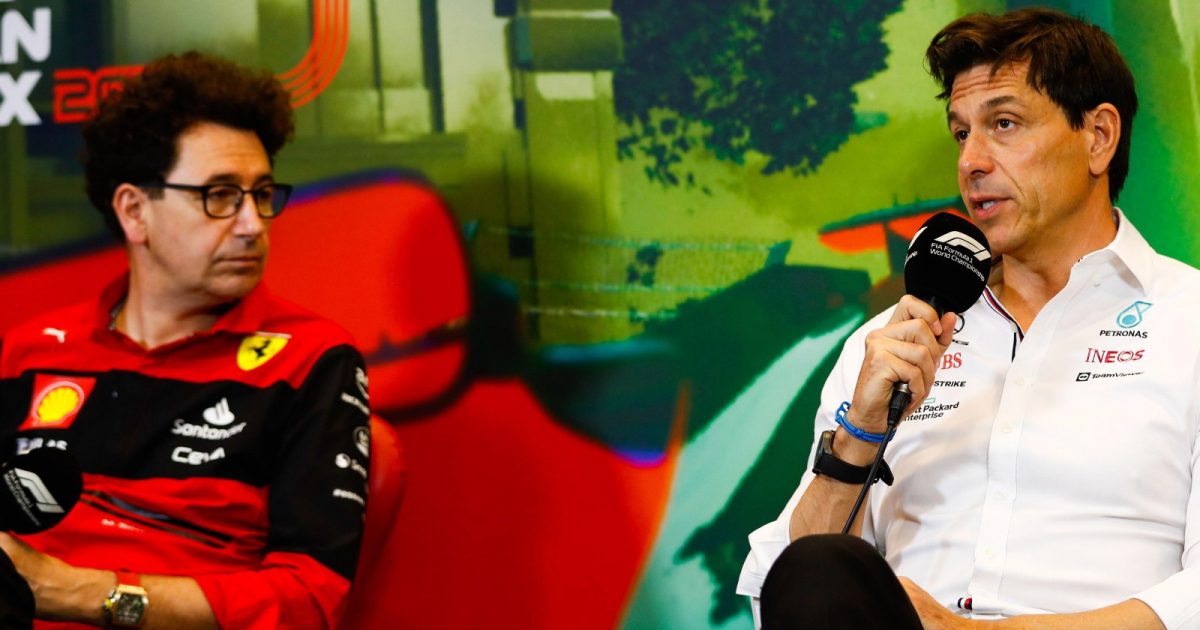 Toto Wolff has warned Ferrari that Mercedes are hot on their heels if they continue to make mistakes.

While there can be no doubt there is a clear pace advantage in the Ferrari compared to the Mercedes, the gap between the two teams currently in the Constructors’ Championship does not accurately represent them.

The points difference between Ferrari and Mercedes is now smaller than from Ferrari to Red Bull, and the Silver Arrows could be ahead of the Italian team after the Canadian Grand Prix should results go their way.

While Ferrari will still be looking forward in their pursuit of Red Bull, they have been warned to keep an eye over their shoulder by Wolff.

“When your car is not super-competitive with the front guys, [it is about] maximising those points,” Wolff told reporters. “It is important to consolidate and make sure you are no worse than third.

“But equally, you see the situation at Ferrari. If they drop the ball often then we are there.”

Despite Wolff’s fighting talk, Mercedes have problems of their own with Lewis Hamilton hobbling away from his car in Baku as a result of back issues caused by severe porpoising.

Unlike both teams ahead of them, Mercedes have not shown any reliability issues this season but still seem unable to get on top of their bouncing problems which in turn are hampering their ability to maximise the car’s speed.

Wolff is not taking his car’s reliability for granted though and said it “could still stop at any time”.

“You always need to be on your toes with reliability because you need to score points and not only be fast,” said the Austrian.

“I feel for the Ferrari guys because they have a super-powerful engine and a good car, but in the end losing so many points makes you lose the championship.

“You need to be always wary, and we are because the car could still stop at any time.”

Although Wolff had said after the Azerbaijan Grand Prix that Hamilton could be a doubt for Canada because of his back problems, the seven-time former World Champion dispelled those concerns in a social media post on Monday.

Hamilton said: “Yesterday (Sunday) was tough and I had some trouble sleeping, but I’ve woken up feeling positive today.

“My back is a little sore and bruised but nothing serious, thankfully. I’ve had acupuncture and physiotherapy with Ang [Cullen, physio and trainer] and I’m on my way to my team to work with them on improving.

“We have to keep fighting. I’ll be there this weekend – I wouldn’t miss it for the world. Wishing everybody an amazing day and week.”