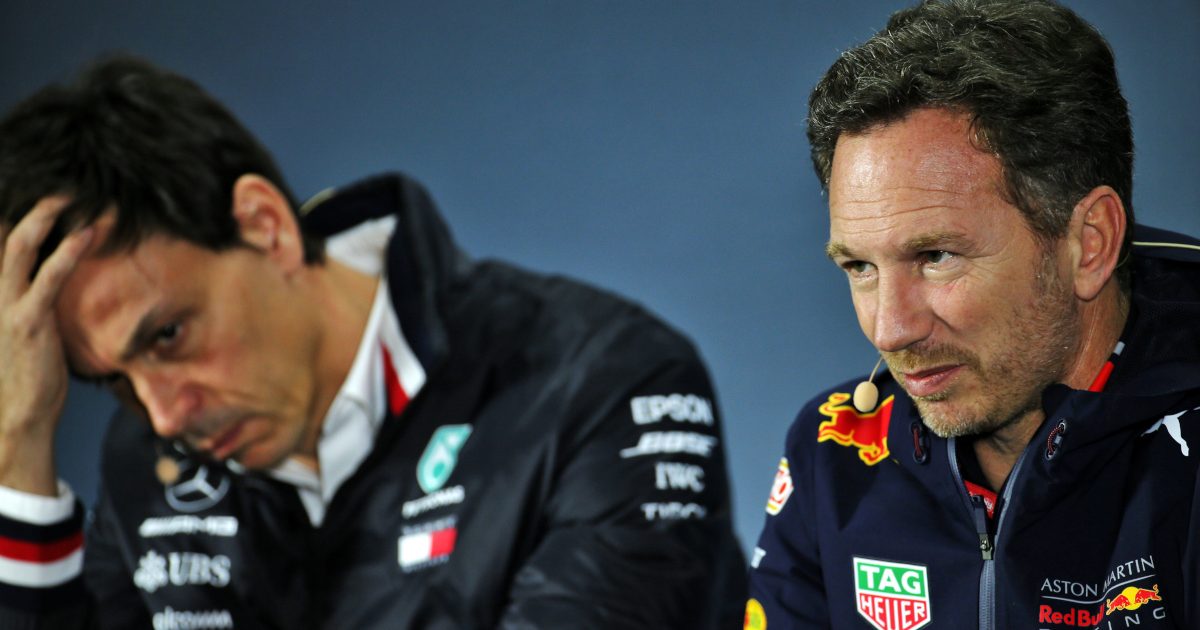 Toto Wolff has vowed to look at “every single bit of tape that falls off” the Red Bull after Lewis Hamilton’s qualifying DSQ in Brazil.

The Mercedes driver was disqualified from Friday’s qualifying for the Sao Paulo Grand Prix when the gap in his DRS was found to be more than the maximum distance of 85mm.

According to Article 3.6.3 of F1’s Technical Regulations, when the DRS flap is open, the distance between the elements must be ‘between 10mm and 85mm’.

Hamilton’s was bigger, which Wolff has said was only by 0.2 of a millimetre and it was because the wing was broken.

The stewards, however, still made the call to throw Hamilton out of the qualifying session, the Briton lining up P20 for Saturday’s sprint qualifying.

Hamilton raced his way to fifth place, an impressive showing in only 24 laps.

That though seems to have done little to take the sting out of Saturday’s stewards’ decision with Wolff vowing to make life as difficult as possible for Red Bull.

“We will look at every single bit of tape that falls off,” said the Mercedes motorsport boss.

“I can promise that we will be asking a lot of questions in the next races.”

"I heard about the result and it was devastating. I quickly reset and got my mind focused on doing what I could do, giving it my everything."

From P20 to P5, Hamilton produced a very strong comeback in the #F1Sprint https://t.co/ObZ9YrgO6k #F1 pic.twitter.com/7UG4Lm1BJB

The Austrian feels Mercedes were unfairly treated by the FIA as in “the last few years from them it was always ‘fix this and fix that’.

“We saw that last weekend with Red Bull and many times before that too.

“But we were not allowed to do that. What is clear is that we do not have an illegal wing. It was a failure on the right side by 0.2mm.”

Red Bull also copped some of the blame.

While it has not been confirmed who brought the DRS to the attention of the FIA given that FIA technical director Jo Bauer examines several cars in parc ferme, Wolff has hinted that it was Red Bull.

“There was once something like a gentleman’s agreement. Obviously there are no longer any gentlemen,” he added.

As for Max Verstappen’s €50,000 fine for touching Hamilton’s wing in parc ferme conditions, that’s another bone of contention for Wolff.

“For someone with a solid middle-class salary, that doesn’t hurt,” Wolff said.