Home News FP2: The usual suspects at the top in Mugello 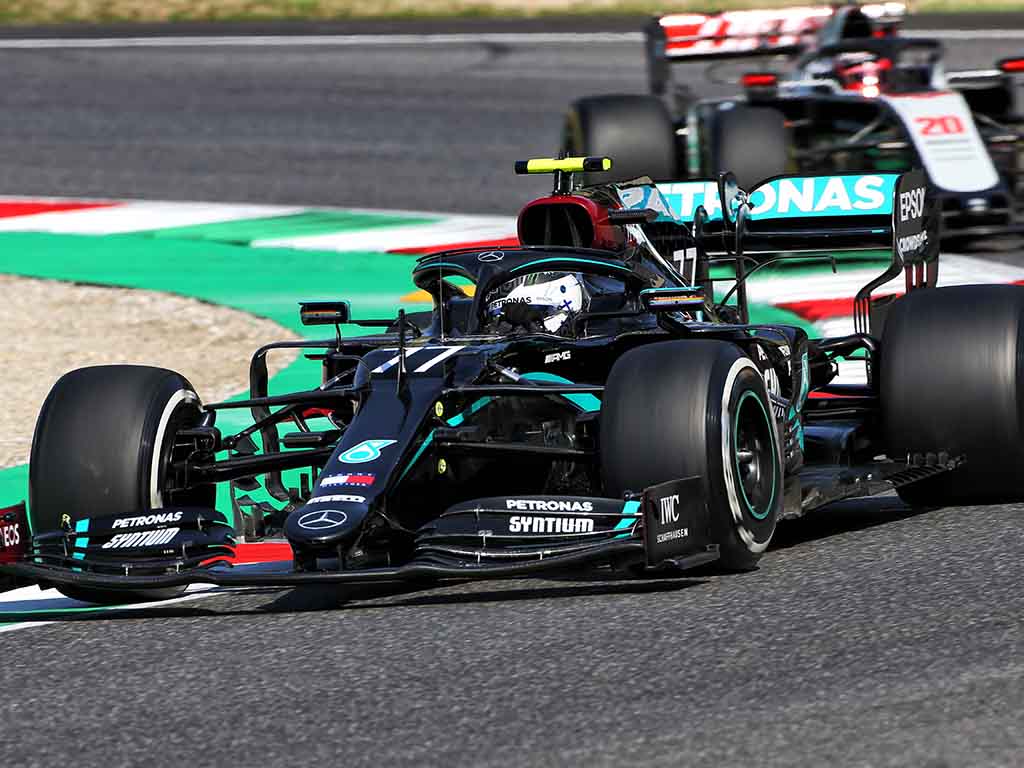 We’ll give you one guess to name the top three after FP2 at Mugello…yep, Valtteri Bottas, Lewis Hamilton and Max Verstappen.

Bottas topped Friday morning practice with a 1:17.879 at the old school Italian circuit and then managed to drop into the 1:16s on a scorching Friday afternoon.

Lewis Hamilton and Max Verstappen were both two tenths behind the Finn, P2 and P3 respectively, in their own exclusive club.

The temperatures crept up to 30 degrees as the teams returned to action on Friday afternoon at the marvellous Mugello circuit. The wind had picked up, too, making this incredibly demanding track just that little bit more difficult to navigate.

It was a case of another Friday, another PU problem for Haas. Romain Grosjean had to stop his running just 10 minutes into the session after he saw the battery was not charging properly.

Meanwhile, back on the track, another Ferrari-powered car was in a little spot of bother as Charles Leclerc went for a spin and into the gravel at Turn 12 but was soon back up and running.

After the first 30 minutes of the session, there was a very familiar front three at the top of the pecking order: Bottas, Verstappen, Hamilton.

The Finn set the early pace with a 1:17.997, with Verstappen two tenths behind and Hamilton a further tenth back. Next up…it was qualifying simulation time.

Well it was until Lando Norris had quite a big off at Turn 3. His front left tyre dipped into the gravel trap and caused the car to suddenly snap out of Norris’ control and into the wall, taking the front wing clean off.

Thankfully the McLaren driver reported he was all ok but the session had to be red flagged for the recovery truck to collect the broken car.

After the recovery mission was complete, there was 40 minutes left in the session for the qualifying and race sims, and the Mercedes duo wasted little time in getting back out there.

Bottas lowered the benchmark to a 1:16.989 and Hamilton was two tenths down despite setting the quickest time through the final sector.

Verstappen also found himself two tenths down in P3. Then, there was quite a large gap to Alex Albon in P4, seven tenths away from his team-mate.

There was no real improvement from those who opted for a second lap on the soft tyre, so it was onwards to the race sims for the remainder of the session.

During those race sims, Sebastian Vettel went for a traditional spin and there was quite a bizarre incident involving Perez and Raikkonen.

Perez, coming out of the pits, locked up going into Turn 1 and tagged Raikkonen who was on a push lap. It sent the Finn into the spin and left Perez with a broken front wing. The session was red flagged again to allow the marshals to pick up the debris.

The final 10 minutes passed without any further incident on a day (and probably weekend) that very much belonged to Mercedes.

However, there was time for one last flashpoint as Vettel’s engine stopped on his in-lap after the session.