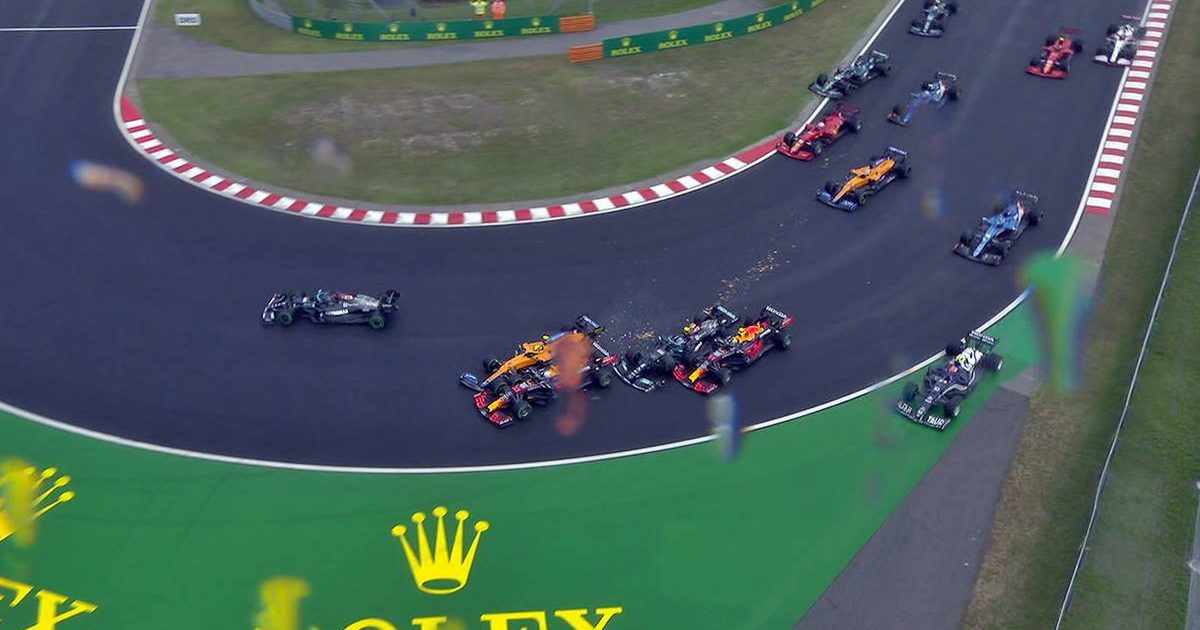 Valtteri Bottas got his braking all wrong into Turn 1 at the Hungarian Grand Prix – and it will cost him five places on the grid at Spa.

After the events of two weeks ago at Silverstone, Mercedes came to Hungary very much back in the Constructors’ Championship hunt, trailing Red Bull by only eight points.

The Hungarian GP was vital for Red Bull to regain some momentum heading into the summer break, but Bottas spoiled their chances of that happening.

There had been talk of rain in the build-up to the race and for once it actually arrived, leaving the track slippery and in need of intermediate tyres to negotiate the start.

Bottas gets a slow start and rear-ends Norris at Turn 1, who then cannons into Verstappen

It was a poor getaway for Bottas, who dropped back from his P2 starting spot, but then his afternoon truly fell apart after getting his braking all wrong, causing him to rear-end the McLaren of Lando Norris.

That contact sent Norris into Red Bull’s Max Verstappen, while Bottas then had a second dose of contact as he wiped out Sergio Perez in the other Red Bull.

Bottas’ Mercedes team-mate Hamilton, meanwhile, escaped the carnage to retain P1, a crazy series of events which could not have worked out better for his World Championship aspirations.

Bottas and Perez were finished for the afternoon. And to make matters worse for Bottas, he was later hit with a five-place grid penalty for the Belgian Grand Prix.

Behind, there was further contact as Aston Martin’s Lance Stroll went into Turn 1 too hot, eliminating himself and Charles Leclerc from the race.

The red flags came out with debris all over the track, suspending the race, allowing Red Bull to go to work on the heavily damaged bodywork of Verstappen’s RB16B.

It was a similar story at McLaren, but they sadly confirmed to FIA race director Michael Masi that Norris would not be taking the restart.

Verstappen was though able to resume racing, albeit with a heavily patched up Red Bull, while a poor choice from Mercedes left Hamilton as the only driver taking the restart on intermediates, while the rest of the grid dived into the pits for slicks.

After taking the standing restart alone, Hamilton sunk to the back after pitting on the following lap, but fought back valiantly to finish P3.