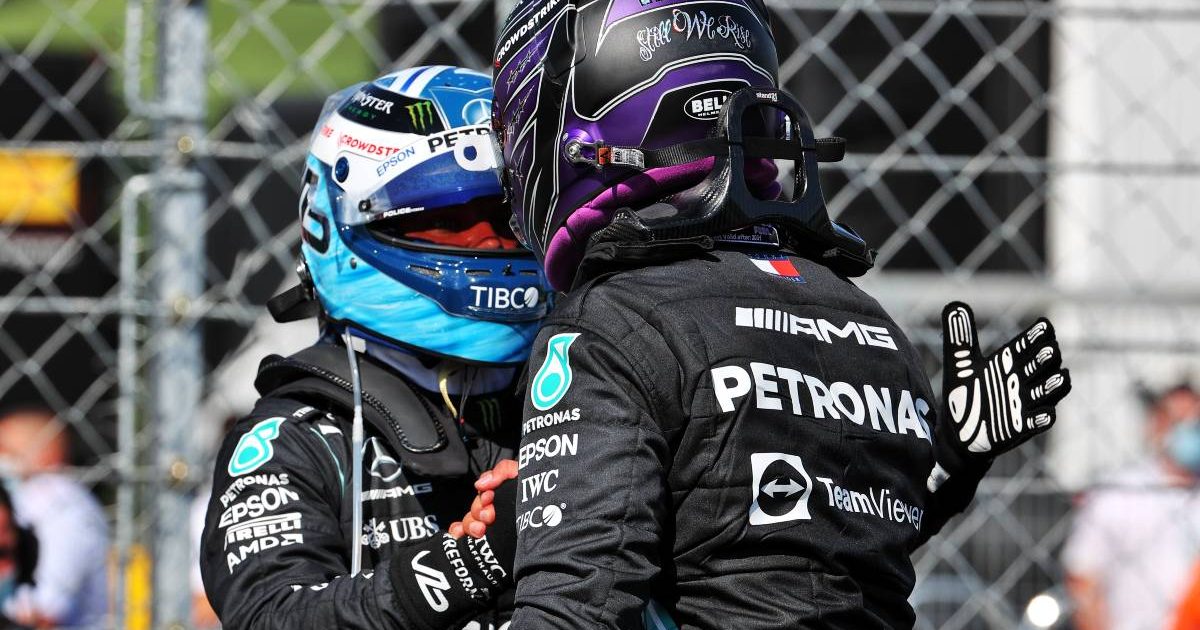 Valtteri Bottas expressed disappointment in the boos aimed towards his Mercedes team-mate Lewis Hamilton in Hungary.

The German team made a huge statement in the battle with Red Bull by locking out the front row at the Hungaroring, consigning Max Verstappen to a P3 start.

But after emerging from his W12 with pole position secured, Hamilton was met with whistles and boos from large sections of the crowd down the main straight.

Hamilton said he would use it as “fuel”, but Bottas could not accept that kind of behaviour towards his team-mate.

“I don’t normally [talk] about these kind of things, what I think, but I heard a lot of booing at the end of qualifying and I don’t understand it,” he told reporters.

“I would like the people to question themselves and the behaviour, which I don’t think is fair.

“We are here as athletes to give every single thing we have to the sport we love. Lewis did an amazing lap at the end and then you get booing.

“So, the people, just question yourself. It’s not right, it’s not fair and we don’t want to see these kind of things.”

While all the talk has centred around Hamilton and Verstappen in this title battle, starting from P2 in Hungary gives Bottas a good shot at claiming a first victory of 2021.

But while happy that his lap was good enough for the front row, Bottas felt he could have done better.

“To be honest, not 100% pleased,” he said of his qualifying performance.

“For me, the issue was I lost a bit of rhythm in Q2 with the medium tyres – I didn’t feel that comfortable with the rear of the car – so then it was not easy to go back on the softs and really attack it fully.

“So it was not so clean and definitely not my best laps of the weekend. But still good enough to get to the front row, so that’s good.”

Verstappen was asked during that press conference about the boos aimed towards Hamilton, many of which came from his fans in orange.

“What do you want me to say? Of course, it’s not correct but at the end of the day I think we are drivers, you shouldn’t get disturbed by these kind of things,” he said.

“You should anyway just focus on what you have to do and that’s deliver in the car.”

It had already been a spiky press conference with the Dutchman having earlier gone off on a sweary rant after being asked about the possibility of going wheel-to-wheel with Hamilton again at the start of the Hungarian GP.