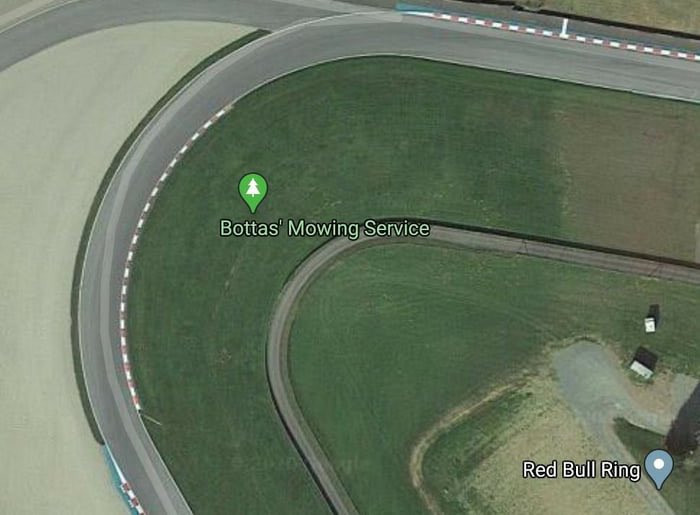 Looking back on 2020, Valtteri Bottas joked that the Bottas’ Mowing Service gag from the Austrian GP was a “life highlight”.

By the time Formula 1 arrived at the Red Bull Ring for the season-opening Austrian Grand Prix in July, it’s safe to say we were all desperate to see some Formula 1 action again after a near four-month delay to the season.

And perhaps that explains the crazy response to Bottas simply going off onto the grass during qualifying for the Austrian GP.

“All right, as long as I’m mowing a little lawn here, this vehicle mows the grass much better than the lawn mower found in my home,” said Bottas over team radio at the time.

And then someone went and edited Google Maps to put a ‘Bottas’ Mowing Service’ placeholder on that section of the track. In the end, everyone got involved!

Some #F1 fans having a bit of fun with the Google Map version of the Red Bull Ring. #Bottas’ Mowing Service is my personal favourite. #RedBullRing #AustrianGP #StyrianGP pic.twitter.com/Nqrw0oRh7y

“One of the highlights of my life so far, getting a monument type thing: Bottas’ Mowing Service,” said Bottas with a smile in a video reviewing his highlights of 2020.

“From the famous grass-mowing moment in Austria. I think I took pole in that qualifying but before that I was mowing some grass.

“Anyways, that is pretty cool!”

Besides being a good lawn mower, Bottas said the dominant Mercedes W11 was a “pleasure to drive”, saying he was very “proud” to have had the opportunity.

“The W11 was a pleasure to drive, a beautiful car,” he said.

“A different livery to other years, but so fast, every single fine detail of this car was just so good and I’m really proud to have been able to drive the W11.”

Sadly for Bottas 2020 though was a fourth season with the Silver Arrows where he failed to challenge team-mate Lewis Hamilton for the World Championship as the Briton wrapped up title number seven, an achievement that puts him equal with Michael Schumacher at the pinnacle of the series.

The Finn admitted that Hamilton was the “better” driver in 2020, but as always will come back fighting next year.

“Lewis, he won the title again, he beat me again,” said Bottas.

“He did a great job over the year, super consistent, very fast all through the season, so he deserved the title this year, he was better.

“Of course I aim to be better in the future.”