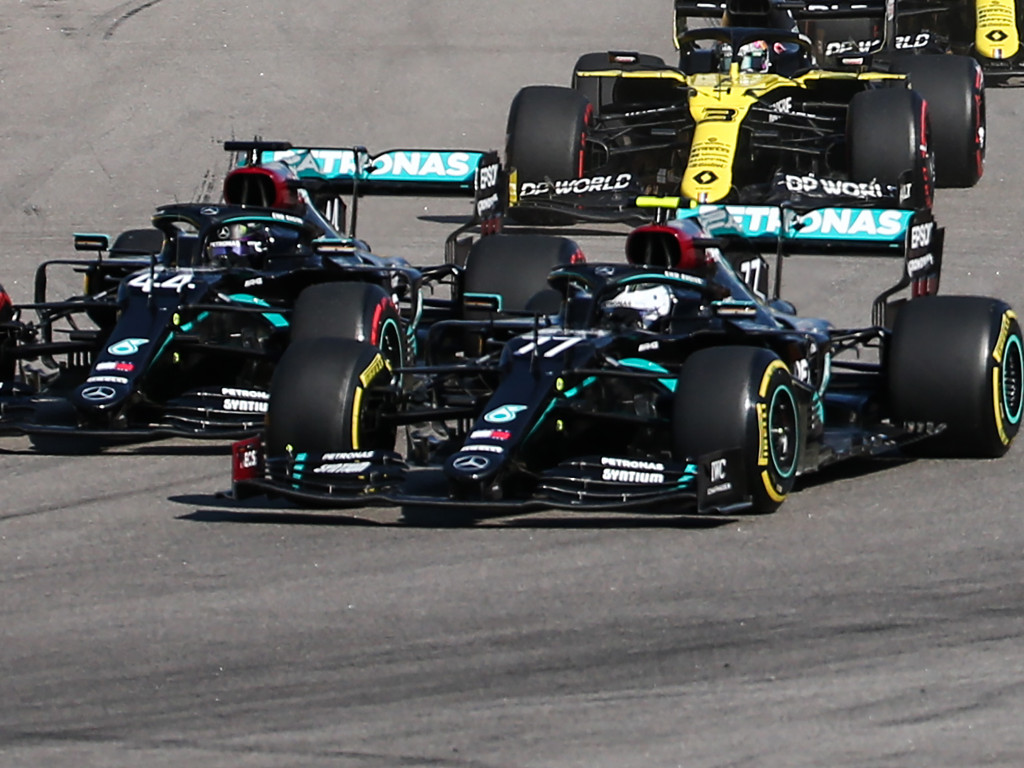 Valtteri Bottas blamed a “massive bee” for his difficult start at the Russian Grand Prix as the Mercedes driver missed the braking zone at Turn 2.

Bottas challenged his team-mate and polesitter Lewis Hamilton off the line at the Sochi Autodrom, but while trying to pass around the outside Bottas put wheels off the track and Hamilton stayed ahead.

As it turned out that wasn’t much of an issue for the Finn after Hamilton was given a pair of five-second time penalties for separate illegal practice starts, so after his first stop where he served all 10 seconds, Hamilton was down in P11 and out of the equation.

That allowed Bottas to stride away from Max Verstappen behind in the Red Bull and record a comfortable, much-needed second win of his career at the Russian Grand Prix and a second victory in the 2020 season.

But interestingly that error at the start wasn’t simply due to the Finn pushing a little too hard, in fact a “massive bee” hit his visor and caused him to miss his braking point.

“Obviously the start is going to be the first opportunity, actually it was a bit compromised because there was a massive bee or something that hit my visor just before braking so I couldn’t really see when I should break and that’s why I went too deep,” he told Sky F1.

“But I knew it was going to be a long race after that and with the medium tyre that I had there would be opportunities, but obviously Lewis had a penalty so once I was in clean air I felt the pace was really awesome and we could really control at the beginning.”

YES!! What a drive from @ValtteriBottas! 👊 He WINS the #RussianGP for the second time!! pic.twitter.com/GAjNjALXjQ

Next up is a circuit which is no stranger to Formula 1, but it was a late guest addition to the 2020 calendar.

That venue is the Nurburging which will host Formula 1’s first Eifel Grand Prix.

The gap to Hamilton for Bottas was 55 points before the Russian Grand Prix, but that is now down to 44 points and the Finn is keen to keep the momentum going as he tries to claw his way back into the 2020 title fight.

“I need to try and keep the momentum again. It’s nice to squeeze some points against Lewis, there are still quite a few races to go, I just have to keep pushing and won’t give up.”

After crossing the line, Bottas’ message on team radio was: “I think it’s again, a nice moment to thank my critics. To whom it may concern, f*** you!”

Elaborating on that, Bottas said: “All this has come from inside. There has been a few disappointing races and obviously giving everything every single week and then being this close to the win, but now finally I’ve got it and things finally went my way as well.

“I consider myself a bit lucky today as well so I take it, I feel I’ve earned it. The critics and the people who tell me that I should give up, that gives me so much energy and power.

“I hope they can learn something.”