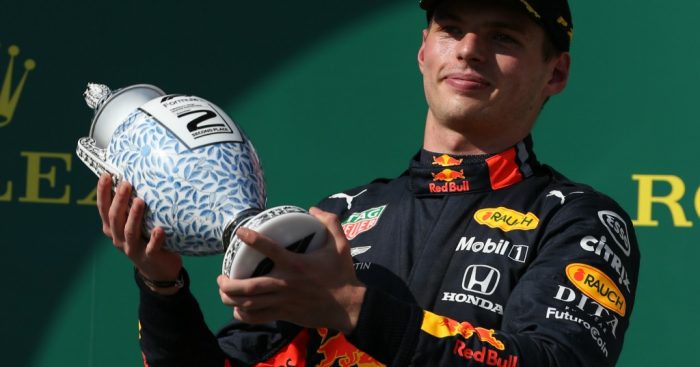 Verstappen, starting from pole, left the squabbling Mercedes cars behind at the start of Sunday’s race at the Hungaroring but came under immense pressure from Lewis Hamilton once he emerged as his main sparring partner.

That pressure eventually amounted to Hamilton passing Verstappen for P1 on Lap 67 after he successfully hunted the Dutchman down on fresh medium tyres, put on after an inspired change to a two-stop strategy.

Even though a third victory in five escaped Verstappen’s clutches, he could not be too upset about finishing second.

“I think you always have to be realistic and today Mercedes were faster,” Verstappen told Sky Sports F1.

“Lewis was pushing hard and when you’re in second, you can gamble a little bit more with going for a two stop because the worst case scenario is you stay second, and the best is you overtake me.

“Today, it worked out for them, but nonetheless, you could see it was hard for me to stay ahead.

“It was still a positive weekend for me, getting pole position and being second in the race. The fastest lap luckily means it’s an extra point so overall it’s been a good weekend.”

Asked if he felt he should have pitted when Lewis came in for the mediums, Verstappen added: “It’s easy to say afterwards, but I think from our side, we did the best we could.”

Now, right in the thick of it 👊 Bring on Spa already 💪#HungarianGP pic.twitter.com/BLSemaurxv

After more honest assessment from Verstappen, he congratulated Hamilton on a seventh Hungarian Grand Prix win.

He added: “We were just not fast enough, but I tried everything I could on those hard tyres to stay alive. Unfortunately it wasn’t enough.

“Of course, congratulations to Lewis for the win and he was pushing me very hard. I was just lacking a bit of grip I guess.

“We tried the one stop, and they had the opportunity to do two, and that worked out well.”

Verstappen’s team-mate Pierre Gasly struggled once again, crossing the line P6 behind Carlos Sainz – at least he still accepts the need to improve and he hopes that will happen after the summer break.

“I am not satisfied with my race, it was very difficult. Friday went well for us, but after FP3 I lost a lot of speed,” he admitted.

“Qualifying was, therefore, difficult yesterday and that was also the case today. I also had a bad start, which didn’t make it any easier.

“I attacked as much as possible, but I slid in all directions and struggled with grip all afternoon. It’s time to take a break, analyse everything and come back stronger in the second half.”

Gasly has been underwhelming in practice, races and qualifying too, and the Frenchman accepts that it’s “clear” that he must do better in qualifying.

“It is clear that I have to be more ahead during qualifying, but I was very happy with the car during FP1 and 2,” he explained.