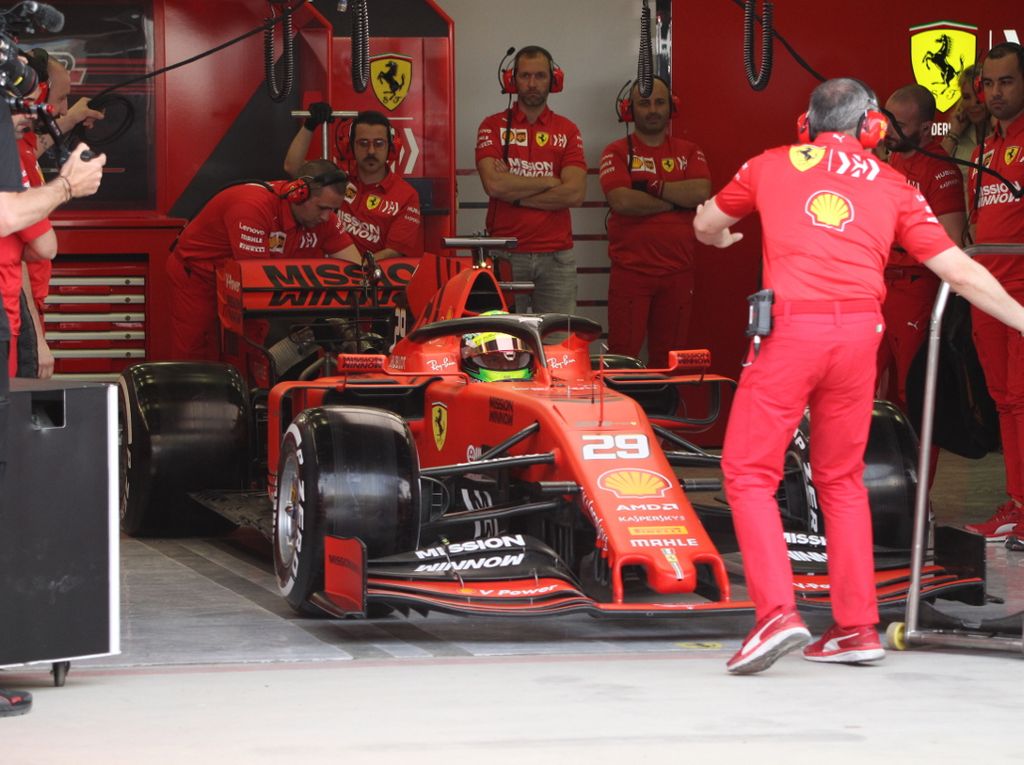 With five minutes of play left at the Bahrain circuit on Tuesday afternoon, Max Verstappen put an end to Mick Schumacher’s dream debut as he pipped the Ferrari driver by 0.6s.

Schumacher, the son of seven-time F1 World Champion Michael, made his Formula 1 debut on Tuesday as the Ferrari young driver tested the SF90 at the Bahrain International Circuit.

Any first F1 test is special for the driver 🙏

The day’s action got off to a delayed start as a track inspection was carried out in the wake of Monday’s sandstorm.

Fernando Alonso, back in action for McLaren as he conducts a Pirelli tyre test, briefly led the way ahead of Lewis Hamilton before Romain Grosjean seized control of the timesheets.

After two hours of running, the Haas driver was P1 with a 1:31.256 putting him 0.158s up on Verstappen. Alexander Albon in the Toro Rosso was third.

There was a momentary lull in the action as the forecast rain arrived at the circuit just after 11am with a short downpour making conditions ever more tricky as the water mixed with the dust and sand.

In the hour before the midday break, Schumacher improved to eighth place with a 1:32.552 as he covered 33 laps on Tuesday morning.

Moments later the rain returned, sending all the drivers back to their respective garages with the rain keeping everyone off the track for almost four hours.

Looks like we won’t be running for a while then. That rain’s back again. 😕#HaasF1 #F1Testing pic.twitter.com/0mGYgG5tkJ

Hamilton broke the silence with 80 minutes left in the day’s play, prompting a queue of cars – including Haas test driver Pietro Fittipaldi and Williams’ Robert Kubica – to venture out.

The final hour saw a spate of drivers laying down fastest laps with Schumacher leading with a 1:30.222 before improving to a 1:29.976.

But with five minutes remaining, Verstappen crossed the line with a 1:29.379 to beat the Ferrari youngster by six-tenths of a second.

Any chance of beating Verstappen’s time was brought to a premature end as Lance Stroll stopped out on track.

The Racing Point driver’s red flag the only stoppage of the day.

Verstappen concluded the day fastest of all ahead of Schumacher and Lando Norris while the morning’s P1 driver, Grosjean, fell to fourth.