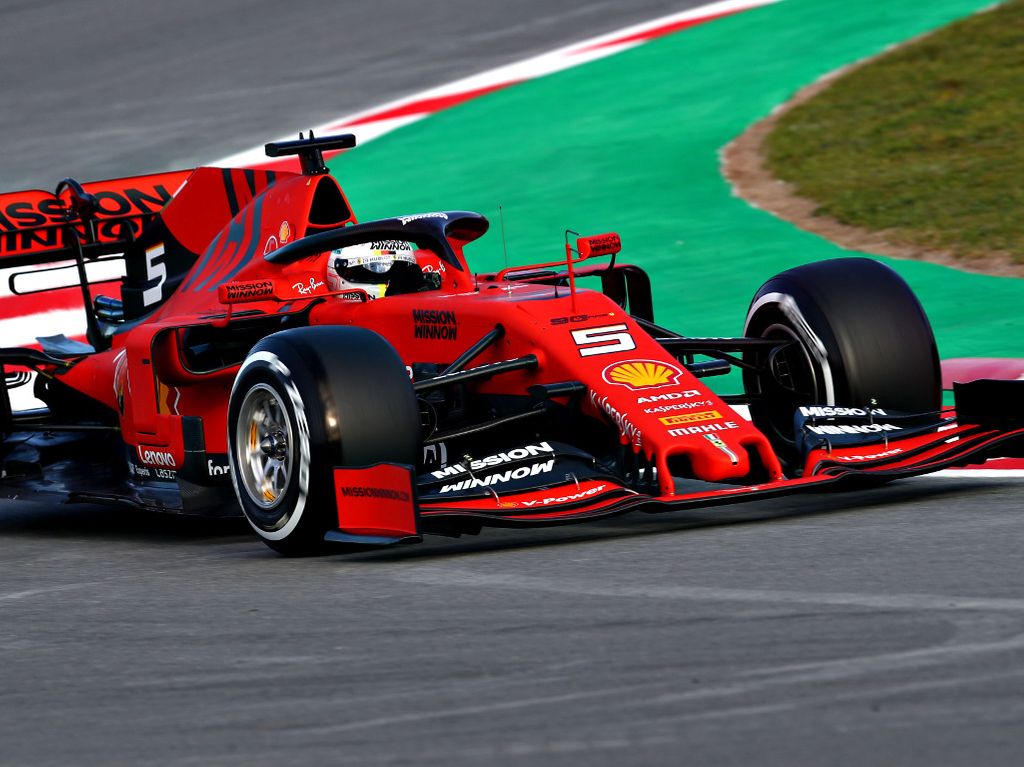 Unlike in 2018, this year testing got underway without any major concerns about the weather at the Circuit de Catalunya.

Vettel hit the ground running with the Ferrari driver quickest in the opening hour despite a small spin blotting his copybook.

Sebastian Vettel losing the rear of the SF90#F1Testing #Seb5 pic.twitter.com/BPzNfXqnQa

Sergio Perez, 1.8s down, went second fastest in the newly-unveiled Racing Point RP19 while Valtteri Bottas was third for Mercedes.

Putting the W10 through its paces, he clocked a best time of 1:20.127 before handing the car over to Lewis Hamilton for the afternoon session.

That didn’t last long as the Finn brought out the first red flag of testing when he beached the car in the gravel at Turn 5 just five minutes into the session.

Raikkonen and the C38 returned to the pits separately but the incident only cost him 45 minutes of track time as Alfa Romeo were quick to get him back out.

Max Verstappen was fifth, two seconds down on Vettel.

He covered 52 laps in his Honda-powered RB15 with unconfirmed reports claiming there was a small power unit issue when Red Bull first opened the garage doors.

What was confirmed, though, was Verstappen brief stoppage in the pit lane later in the morning.

The mini yellow flag minutes before was because of Max stopped at the pit lane. pic.twitter.com/WOqFC4UWCb

Carlos Sainz in the McLaren was P6 ahead of Nico Hulkenberg and Romain Grosjean.

Grosjean brought out the reds when his Rich Energy Haas VF-19 suffered a fuel pressure issue. That left him stuck in the pits with just 18 laps on the board.

Fuel pressure loss – we’ve been brought back to the garage! Work to do…#F1Testing @Circuitcat_eng pic.twitter.com/J8s6TWDw0l

Daniil Kvyat, returning to Formula 1 with the Toro Rosso team, completed the timesheets.

Williams did not take to the track on Monday having announced on Sunday that they were behind on their preparations.

“Unfortunately, we have had to delay the start of our pre-season Barcelona test to Tuesday morning,” said deputy team boss Claire Williams.

“We have had an incredibly busy winter at Grove getting the FW42 prepared for the season ahead and, despite everyone’s best efforts, we need some more time before it will be ready to run.”

Williams then later announced that they are set to miss the second day, too.