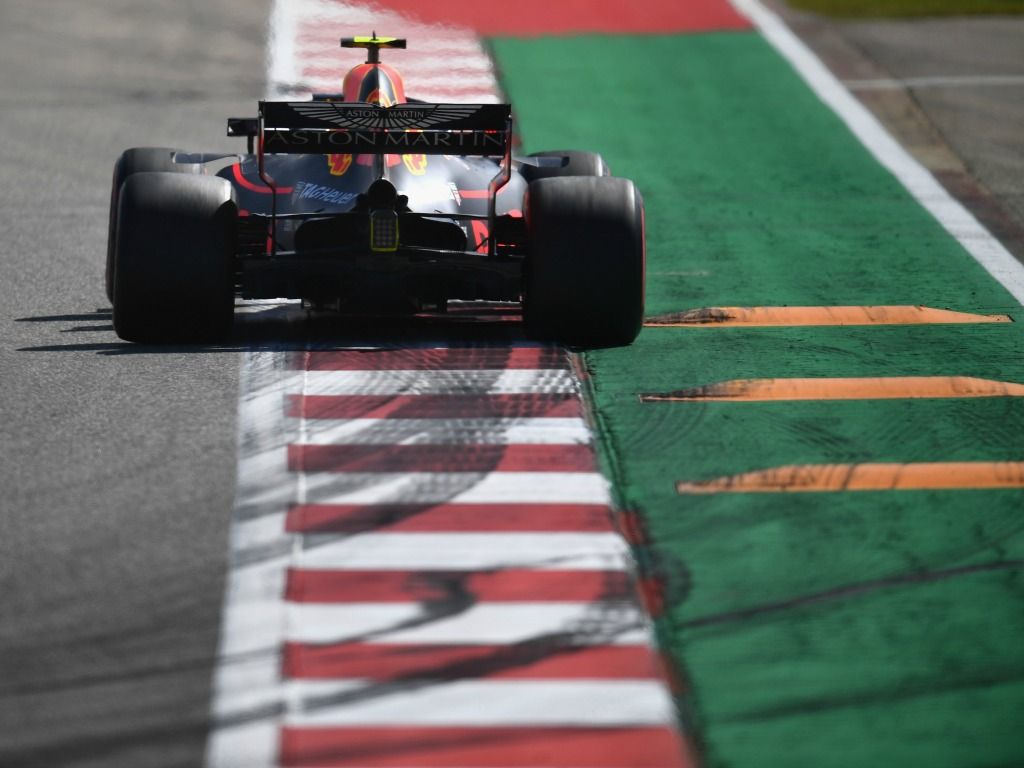 Charlie Whiting has said that Adrian Newey suggested that Formula 1 could use “slippery kerbs” to prevent track limits abuse.

Track limits once again were a talking point in Austin, with Max Verstappen running wide at Turn 19 in qualifying.

The Dutchman suffered a suspension failure after clipping one of the sausage kerbs on the exit of the corner.

New kerbs were installed at Austin as F1 tried to prevent a repeat of the 2017 race, in which Verstappen was given a penalty for overtaking Kimi Raikkonen by cutting Turn 17.

“It [kerbs] works better on some circuits than it does others,” Whiting said.

“At the Red Bull Ring we had to put the additional kerbs behind, because the first time they were installed there were suspension failures.

“Basically the cars couldn’t cope with the kerbs.

“You can see the problem there, some cars were OK, others weren’t but they had to redesign their cars to make sure that they can cope with the things.”

“This is one of the fundamental arguments that I have with them sometimes,” he added.

“They want the kerbs to be designed to suit the cars and I say ‘no, that’s not the way it is, you have to design the cars to suit the circuits’.

“It’s a complicated subject which is not simple to find a solution to.”

“Adrian Newey came to me recently and suggested and we could have some sort of slippery kerb, and I said ‘that’s great Adrian, but if you can find a kerb that deters all kinds of car and is suitable for motorbikes, please tell me about it, because we can’t think of one at the moment’,” Whiting continued.

The fact that most Formula 1 circuits also host other types of motorsports, including supercars, touring cars and motorbikes, means that some suggestions are much tougher to implement.

“That’s the biggest problem, to be able to let track owners and operators be able to use their circuits all year long without having to do too much work,” Whiting explained.

“In Red Bull Ring, for example, some of the kerbs they put down, they take out when they have motorcycle activity.

“It just depends how the circuits need to operate. It would be a relatively straightforward thing to ask them to install kerbs which are suitable for all types of car, but then they would probably be a little bit too bad for F1 cars.

“This is the problem, when you’ve got all these gentleman drivers driving Ferrari Challenge and things like that, and they’re all over the place.”

The real issue comes with motorbikes. A “slippery kerb” would cause havoc for riders, and could lead to serious injuries.

“I know that’s not our problem, but MotoGP want to run on some F1 circuits, World Superbikes do, and they need kerbs which don’t cause them too much difficulty,” Whiting added.

“This is whey we came up with the double kerb, as we call it, which is on the exit of Turns 9 and 19 [in Austin], and we’ve introduced it in a number of tracks now.

“We have kerbs that are just about good enough for F1 cars, they’re not enough to deter Porsche Supercup for example, but they’re OK for bikes, and that’s about a good a compromise as we’re going to get where you have a circuit that wants to run F1 and MotoGP.”