Home News Why Perez could rejoin the Belgian Grand Prix 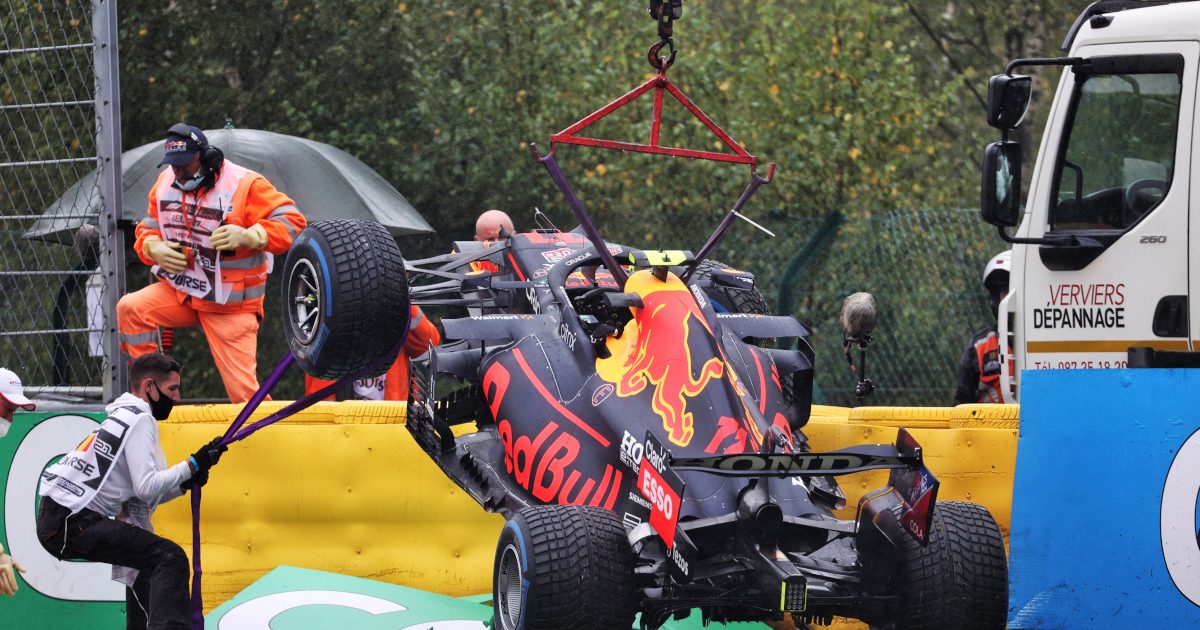 Sergio Perez will, according to F1 race director Michael Masi, be permitted to start the Belgian Grand Prix but only from the pit lane.

The Red Bull driver, fresh from signing new deal with the Milton Keynes squad for the 2022 season, earned Helmut Marko’s ire when he crashed his RB16B on his out-lap at a wet Spa-Francorchamps circuit.

Red Bull informed Masi that Perez would not be taking the start.

“Right front suspension damage is too extreme for us to continue,” team manager Jonathan Wheatley radioed in as the team absorbed the blow to their championship hopes.

Checo will not start the race ❌#BelgianGP 🇧🇪 #F1 pic.twitter.com/Qmfym6pCkx

But with the formation delayed by 25 minutes due to the pouring rain, Perez’s car was returned to the pits and his mechanics began working to repair it.

Those efforts reached fever pitch when, as the drivers neared the end of the formation lap, Masi called them into the pits, declaring ‘start procedure suspended’. Almost immediately Red Bull approached Masi to ask if Perez could take the start.

Masi’s response: “That would be a no because he’s had outside assistance to get back in.” The Australian was referring to Perez’s car returning to the pits on the back of a truck, and not under its own power.

Wheatley hit back, saying “mechanical assistance only counts in the race.” Masi informed him that he and the stewards would have a look at the rules.

A second chance for Checo?

Red Bull are chatting over the radio with Michael Masi about whether or not Perez can, after all, start the race.

They think they can get his car ready, and Masi is double checking the regulations#BelgianGP 🇧🇪 #F1 pic.twitter.com/BlQU6ObEKp

30 minutes later he told Red Bull: “Good news, Sergio will take the start.” But, he added, it would have to be from the pit lane.

The rule that will allow Perez to take the restart is Article 38.1, which states that ‘any car which does not complete a reconnaissance lap and reach the grid under its own power will not be permitted to start the race from the grid’.

But he rules says nothing about not starting from the pit lane. And, as the race has not started, called before the formation lap, Perez is permitted to take the start, but not from the grid.

Mercedes were quick to question that decision, and will undoubtedly having their brains’ trust go through the rules with a fine toothcomb as they are locked in a furious battle with Red Bull for the World titles.

Sadly, for Belgium at least it was in vein, with the race ended after two laps behind the Safety Car.

That meant Perez would be classified P19.