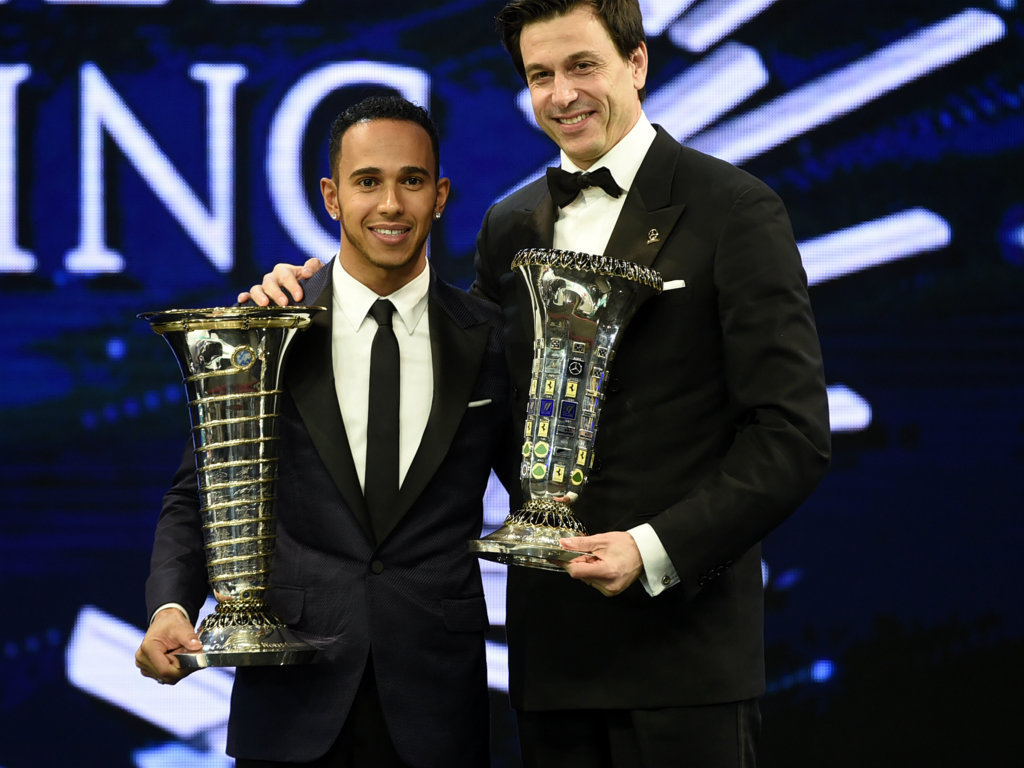 The 2014 results are in and Frank Hopkinson turns into a bit of an oracle with his scary prediction about the safety of the cars when recovered by marshals.

01. Drivers’ Champion? Lewis Hamilton
MF: Fernando Alonso – or Lewis Hamilton. Again my heart is going with a Ferrari driver but my head says everything is pointing towards Hamilton and Mercedes having the edge over their rivals. +1
FH: Lewis Hamilton – But it will be a bumpy ride, both competing against team-mate Nico Rosberg, and getting frustrated with the technology. Nico and Lewis will be pretty evenly matched, but Lewis has been there and suffered the stress and pressure that World Championship expectation can bring. For Nico it’s a whole new experience. +1
SJ: For the first time in years it’s not an easy one to choose. Eeny, meeny, miny, Hamilton! +1
BP: Expect Mercedes to set the pace for large parts of the year, leaving Lewis Hamilton as the leading contender for the title. His experience of consistently competing at the front end of the grid will serve him well in his battle with Nico Rosberg. +1

02. Constructors’ title? Mercedes
MF: Mercedes are looking very much the team to beat so with Hamilton and Rosberg’s points combining I will give it to Merc. +1
FH: Mercedes – They have the best engine and this year it’s an engine-dominated series. +1
SJ: Raikkonen and Alonso regularly finish on the podium so Ferrari. 0
BP: Hamilton and Rosbert might fight it out for the Drivers’ title, but will have the opportunity to celebrate together when Mercedes romp to the Constructors’ crown. +1

03. Will Red Bull reach the chequered flag in Australia? Vettel retired and Ricciardo was disqualified due to an illegal fuel flow.
MF: Yes. I think so matter how much they struggled in testing (and given the rest of the field hope) they will find a solution before Melbourne. 0
FH: Only the one they bring out at the end of Free Practice and Qualifying. 0
SJ: Definitely. Probably both Seb and Dan. 0
BP: Both Seb Vettel and Dan Ricciardo won’t reach the halfway stage after missing out on Q3 on Saturday. +1

05. Best grand prix of the season? Bahrain won it in the end
MF: I always love Montreal but for sheer excitement I will have to say Australia. It’s such a mystery what could happen and I reckon a backmarker outfit could take advantage and that would be great. 0
FH: Monaco. The testing from Bahrain proved that without traction control the new cars are a handful in the dry when putting the power down out of corners. Just imagine Monaco in the wet with all the torque the cars can generate with the extra ERS. 0
SJ: Canada always delivers. 0
BP: Belgium or Italy, because Spa and Monza are the 2 best tracks on the calendar. 0

06. Biggest controversy? Hamilton/Rosberg battle at Spa and the fallout or the Bianchi crash
MF: Either Renault will be permitted to make dramatic (and unfair) changes to their engines OR Bernie Ecclestone will be slated by the German judge but will walk free on a technicality. 0
FH: Apart from the usual intra-team rivalry, there may well be a problem with the safety of the cars as recovered by marshals. At the moment it’s been the teams doing it themselves in testing – there may well be some safety issues ahead. +1
SJ: In an attempt to make up for lost time/points, Newey comes up with a new concept and the other teams don’t like it so they protest. 0
BP: After a poor start to the season Red Bull file a request to have the RB10 fitted with one of last year’s V10s, because ‘interest in F1 will dwindle if Mercedes just wins every race’. 0

07. Most welcome surprise? Jules Bianchi’s two points in Monaco
MF: Felipe Massa winning a grand prix for Williams. 0
FH: Williams will return to their rightful place in the top five teams. 0
SJ: Red Bull struggling. 0
BP: Double points in Abu Dhabi will have no telling impact on either title. 0

08. Raikkonen or Alonso? Alonso won it by miles
MF: Alonso as I reckon he is probably the most complete driver on the grid – and he has a lot to prove this season. +1
FH: Alonso. There are four certainties in this life: tax, death, a nurse (according to David Coulthard) and Alonso. +1
SJ: Who is more likeable? Raikkonen. Who will finish higher? Alonso. +1
BP: Kimi all the way… The Finn will surprise friend and foe with his committed effort to the Ferrari cause and will finish as the ‘best of the rest’ behind the dominant Merc pair. 0

09. Will a midfield team (Sauber, Force India, STR, Williams) win a grand prix? Williams came close, but no cigar.
MF: Williams with Massa behind the wheel. 0
FH: Yes. But it will have to have a Mercedes engine, which means that counts out 50% of the above. Both Williams and Force-India could win and all four of their drivers have the ability to take the top step. 0
SJ: Force India, but they need to do it in the first few races before the others catch up. 0
BP: Yes, Williams. Both Force India and Sauber will get a podium at some point though. 0

10. Will Bernie Ecclestone still be F1 supremo come year end? Yes, and it was never in doubt.
MF: Never write off Bernie. More than one can say never write off Red Bull, Bernie’s powers are even more far-reaching. +1
FH: It depends entirely on the outcome of the court case in Munich. The commercial rights holder CVC Capital Partners have vowed to get rid of him if there is wrongdoing, but despite the High Court ruling in January, they’ve done nothing. So it is down to the big one in Bavaria. +1
SJ: Yes. +1
BP: Bernie will remain in charge until he is forcefully removed…by legal or other means. +1

11. How soon till Marussia and Caterham score points? Bianchi scored Marussia’s first-ever points in Monaco
MF: By Malaysia one of them will have scored. If they haven’t by then, then they won’t. 0
FH: The first race. It may well be a few more races before they both score points in the same race, but that could happen in the season. 0
SJ: Maybe in 2015. 0
BP: Australlia, due to the large amounts of retirements that sees less than 10 cars finish the race. 0

12. Will Lotus finish in the Top 5 constructors? No, they finished eighth
MF: Yes, I rate the new Romain Grosjean. He brings the talent while Pastor brings the money needed to develop the car. 0
FH: No. The name Genii Capital for the team’s owners isn’t very apt. +1
SJ: Yes. 0
BP: The Enstone team will have their moments, but won’t be able make up the time lost to the Mercedes teams, Ferrari or Red Bull. +1
13. Will there be a major rule revision through the course of the season, like we saw in 2013 with the tyre compounds after Silverstone?No, but they did introduce the ‘no coaching rule’, which everyone seemed to ignore.
MF: If there is one it will relate to fuel saving and the 100kg rule being absolished because it makes things too slow, too boring. But if it’s not that one then there won’t be a change. +1
FH: There may well be a chorus of disapproval from the drivers that not only are they having to save tyres, but they’re also having to save fuel. Certainly the races will look different this year because there will be no incentive to build a big lead, when a Safety Car could cancel all that out. Instead the leader will just be out of reach, but saving fuel. There could be a decision to allow slightly more fuel – though with fuel tanks designed to take around the 100kgs, it won’t be much more. 0
SJ: No. +1
BP: None during the season, but after the season finale, Ecclestone will reveal that more ‘double points’ races will be added due to its success in Abu Dhabi, despite the rule not influence the outcome of either title. +1

15. Hulkenberg or Perez? Hulkenberg
MF: Hulkenberg all the way. +1
FH: Hulkenberg – and he’ll be so glad he didn’t get that Lotus drive. +1
SJ: Perez. 0
BP: Perez. The Mexican might have disappointed with McLaren, but don’t be too surprised if he produces several accomplished drives during the course of the year. 0

16. The ‘Drive of the season’ will come from which driver. Bianchi in Monaco
MF: Daniel Ricciardo in the race where he shows Sebastian Vettel that he won’t take number two lying down. 0
FH: Jules Bianchi will finally have the equipment to show what he’s made of. +1
SJ: Raikkonen. 0
BP: Raikkonen at Spa, where the Finn will somehow carve through the field on race day despite qualifying on the fourth row. 0

18. Bottas or Massa? Bottas
MF: Massa. He gets a lot of stick (from me included) and it’s not always deserved. 0
FH: Bottas will be the more consistent points scorer, but Massa may well get the standout results. +1
SJ: One is in his second season and one nearly won a title. Definitely the Brazilian. 0
BP: Massa by a considerable distance. Bottas might be a regular points scorer for Williams, but the Brazilian will challenge the front of the grid on more than a few occasions. +1

19. Will Red Bull announce a switch to Honda for 2016? No
MF: No. One bad pre-season does not a winning partnership destroy. +1
FH: It depends if they want to write off 2015 as well. If they make a half-decent start to 2014 they’ll be tempted to wait. Because they are the most obvious candidate they can afford to wait, so I think that’s a no. +1
SJ: No. +1
BP: Yes, after a season’s struggles with Renault, they’ll be ready to jump ship. 0

20. Will we get a GP with under 10 cars finishing? No
MF: Australia? 0
FH:Yes. If teams can struggle through in Melbourne, then the heat (and rain) of Malaysia maycause problems. 0
SJ: Unlikely. If we do it will mean Marussia and Caterham will finish in the points and I’m not really keen on going back to change my answer for question 11. +1
BP: Yes, Australia as several cars struggle with their power units and brake systems under varying fuel loads. 0