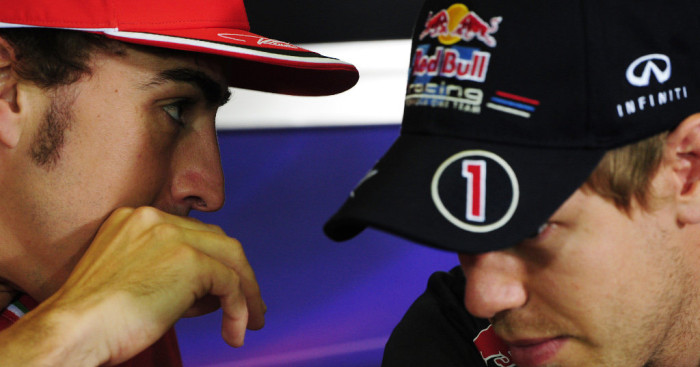 Fernando Alonso has played down rumours Sebastian Vettel could join him at Ferrari in 2014, saying every year “someone is coming” to the Italian outfit…

Fernando Alonso has played down rumours Sebastian Vettel could join him at Ferrari in 2014, saying every year “someone is coming” to the Italian outfit.

Despite having a contract in place with Red Bull Racing, stories emerged last week claiming that Vettel is off to Ferrari to partner Alonso.

“Insiders are adamant that the German has signed an option with Ferrari for 2014, subject to competitive form from the Prancing Horse stable for the rest of 2012,” The Independent on Sunday reported.

And although Vettel did not flat-out deny the reports, he told Autosport that it is “difficult to imagine another kind of life” outside of Red Bull and that he is “very happy where I am right now and I don’t want to move on to anywhere else.”

Alonso meanwhile has told CNN that the Vettel rumours are “only speculation. Every year in Ferrari it is like this.”

The double World Champion added: “I had this when I was with Renault in the past.

“Every year around summer always the speculations: ‘Alonso will go to Ferrari.’ I answered many questions over the years and now when I joined Ferrari it is the opposite.

“Every year someone is coming to Ferrari, it has been like this. I think it is something you have to deal also when you are in Ferrari.”

The Spaniard also defended his current team-mate Felipe Massa, who has had a trying time of late, prompting endless reports of his pending sacking.

“We know that there has been some coincidences and some bad luck and moments in particular races that he didn’t score points he deserved,” Alonso said of Massa.

“We know that in practice and in qualifying we are much closer, we are fighting, we are together in some of the first corners, but then some factors make him always in some troubles, some incidents, and he lost points.

“But he has the talent, he has full support from our bosses, from me, from everybody in the team and we know the talent from Felipe. We know that before later he will shine.”