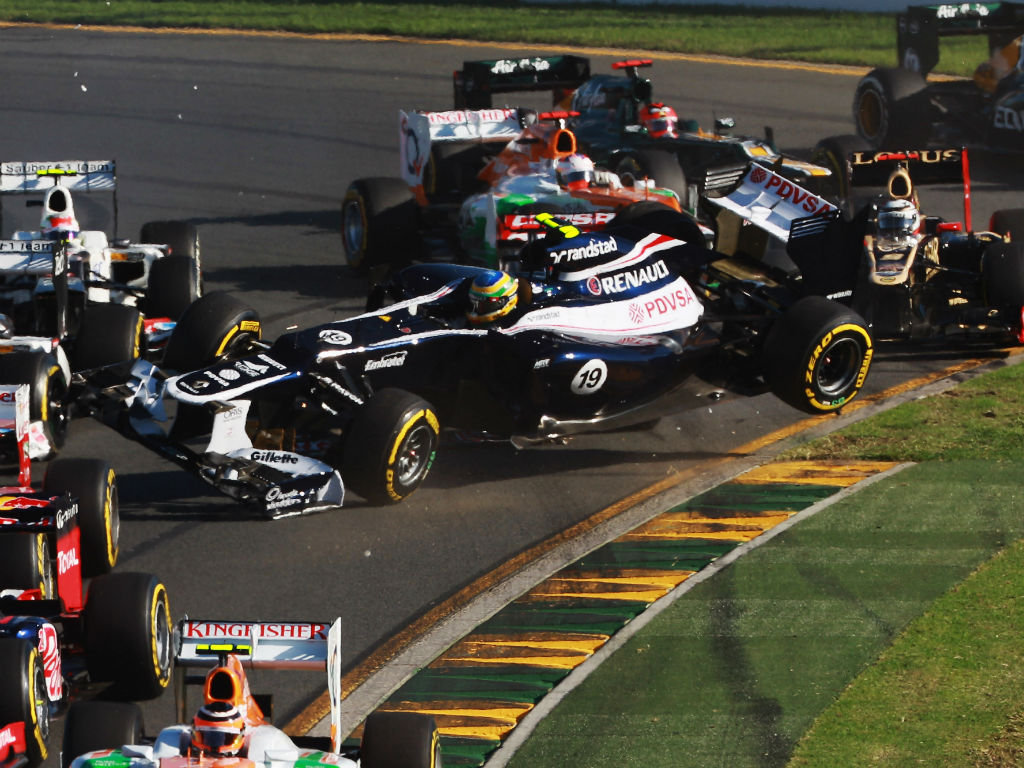 Star of the Race
Jenson Button, McLaren, 1st
As the timing screens came alive at the Australian Grand Prix it was clear that those who had tipped Jenson Button to be a World Champion had a lot of reasons to back up their choice. Button drove a Vettel-esque like race. He got a tremendous start off the line, even if his move into second gear was a bit clunky. By Lap 2 he had got outside the gravitational pull of the DRS zone. By the end of Lap 5 he’d put in five successive fastest laps and got his three-second cushion over Lewis. He managed the gap in the opening stint, saved fuel where he could. After the restart on Lap 42 he opened up a 2.5 second gap on the opening lap and then put in six successive fastest laps to open up the gap further. He looked in control.

Overtaking Move of the Race
Lap 25: Kimi Raikkonen on Kamui Kobayashi
Kimi Raikkonen had a tremendous return to F1 racing and was involved in so much action – most of it involving Saubers. On Lap 25 Kobayashi was pressuring Massa and Raikkonen was right on KK’s gearbox. With the Japanese preoccupied with lining up the Ferrari through Turn 3, Raikkonen placed his car neatly on the outside coming out of the turn and passed the Sauber on the outside of Turn 4 a difficult move to make stick without tears and carbon fibre – as Massa and Senna proved later in the race.
This was just one of many great Kimi overtakes, although his penultimate corner pass on Perez – also round the outside – to rob him of 7th was almost as good.

Winners
Sebastian Vettel, Red Bull Racing, 2nd
Vettel’s early pass on Rosberg was a joy to watch and showed that he can scrap his way through the field every bit as aggressively as Mark Webber. Another two or three laps stuck behind Rosberg would certainly have confined him to 3rd place. He was fortunate to get the Safety Car when he did, but he was brilliant in the middle stint.

Lewis Hamilton, McLaren, 3rd
Oh come on Mr.Sulky, it’s not the end of the world is it. You came third and got a nice big shiny trophy to show the rest of the cub scout pack, no need to start up the ten-year-old-boy-taking- his-football-home routine…
There are two drivers who do brilliant hang-dog face gloomy after messing up or underperforming in grands prix – Lewis and Fernando Alonso. Fernando has the downturned mouth mugging expression, Lewis has the pained look and the thin-smile-for-the-camera. Obviously he had planned to dedicate this one to Brenda for Mothers’ Day, but it wasn’t meant to be. He didn’t do anything wrong. It wasn’t his fault that McLaren cocked up the first tyre stop.
At the end of the opening stint the tyres suddenly started to fall off and from going from low 1:33s laps they were suddenly doing 1:34s when everyone else was doing 1:32s. Lewis did a couple of 1:34s and then a 1:36 before he could get his new tyres after Jenson got his. Had McLaren been a bit smarter then he wouldn’t have lost so much time behind Perez and Vettel wouldn’t have got the jump on him behind the Safety Car.
We’ve seen this hesitance from McLaren before when they’re in a strong position and don’t want to throw it away, notably in 2007, at the Chinese Grand Prix, when they brought Lewis in for new tyres far too late. Perhaps it’s the presence of Ron Dennis in the garage that puts everyone on edge?

Mark Webber, Red Bull, 4th
His best ever result in Oz, but his starts must be beginning to cause a few headaches at the Red Bull team. Last season he often qualified two or three places behind Vettel and compounded the problem by getting poor getaways, eventually making his way back to where he started from. He went one better than that in Oz and thanks to the Safety Car had a shot at the podium come the end. He’s had poor starts in pressure situations before but qualifying in front of Vettel should have given him some kind of lift at his home GP.

Fernando Alonso, Ferrari, 5th
From the performance of the two red cars you’d think Fernando was already in the B-spec version. Fifth place was more than he’d hoped for, but better still, the pace of his car looked pretty good. Certainly not the disaster foretold before the F1 circus arrived in town. Had he not spun in qualifying he would easily have made it into Q3 and he would probably have been mixing it with the likes of Vettel and Rosberg. Next week will give us a far better idea of what the cars are like on a pukka grand prix circuit. However that could be worse, not better, as Massa chewed up his tyres quicker than a Doberman with a Spiller’s Rawhide Munchy Roll and Malaysia will be hot.

Michael Schumacher, Mercedes, DNF
A very “pleasant” weekend for Michael up until the time his gearbox decided it wasn’t going to give him third gear. Great qualifying position and he beat his team-mate into the bargain plus the usual cracking start… until we got to Lap 11. Schumi had the ideal start to his Grand Prix season, he just didn’t have the ideal finish. Lewis could learn a lot from the attitude Michael showed in his post-race interviews. Yes, it’s easy for Michael to be phlegmatic when he’s got seven World Championships in the trophy room, but it must have been a major disappointment for him nonetheless, if only to avoid questions about that elusive podium.

Kamui Kobayashi, Sauber, 6th
Kamui is making it his mission to give returning World Champions a hard time. Last year he took a fancy to nestling his tyres delicately against the sidepods of Michael Schumacher’s car whenever he could and this year, with Michael disappeared further up the grid, he’s going to see what fun he can have with Raikkonen. Kimi’s up for it.

Kimi Raikkonen, Lotus, 7th
Great to hear some onboard clips from Kimi during the race, including the one that made him sound like a kind of Finnish Victor Meldrew, the grumpy ex-World Champion. “Why do I get all the blue flags?” he shouted into his microphone, to which his engineer said calmly, “the blue flags are for the cars behind.”
Now is it just me or do all British race engineers – apart from Rob ‘why aye bonny lad’ Smedley – sound the same. Listening to the transmission (and not looking at the caption) it could have been Mercedes, McLaren or even Red Bull making the call.
This followed on from grumpy qualifying when he said the team didn’t tell him to hurry up because the chequered flag was about to fall. The team didn’t tell him because if he had continued at the same speed after his mistake he would have made it through. So, a bit more acclimatisation needed to get back in the F1 swing. And no you don’t have to stop at the end of every lap to get an official time check from the marshal with the bobble hat.