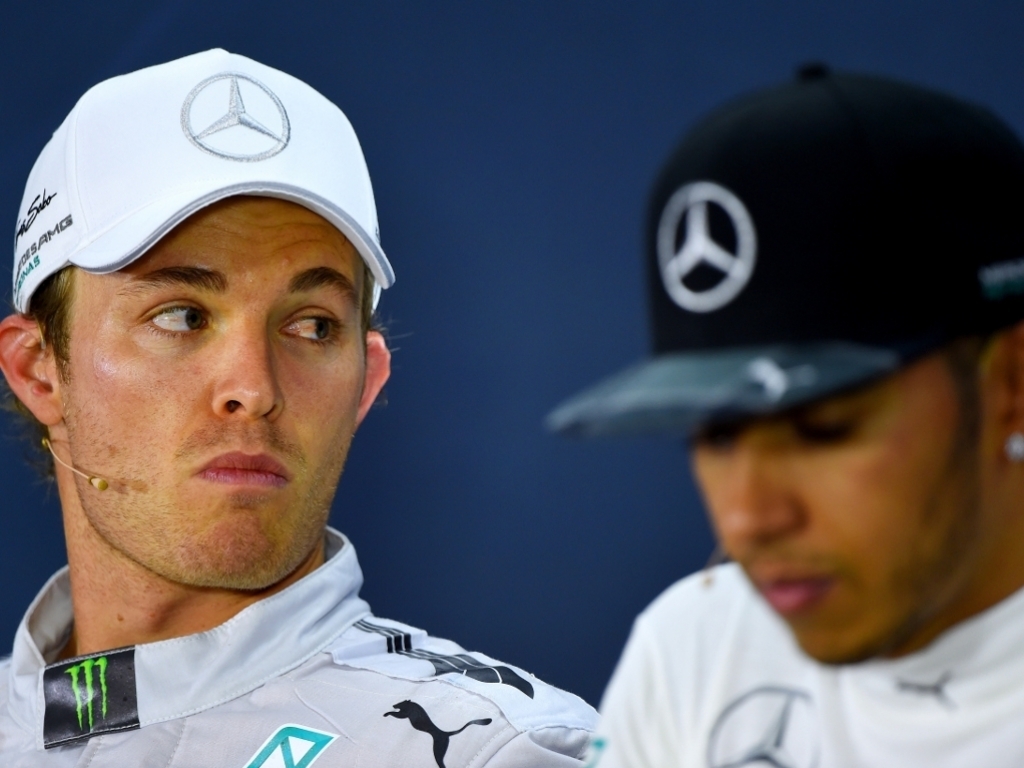 Nico Rosberg HAS to win in Bahrain, the tension at Merc diffused, McLaren's Mr Postive and Not-so-Positive and more.

* Nobody needs reminding that the night race in Bahrain last year was one of the most electric GPs of all time. A Safety Car ten laps from the end brought Lewis Hamilton and Nico Rosberg together for a duet of blocking, late braking, sliding, edging and almost colliding, a performance that re-invigorated what (now ex-) Ferrari chief Luca Montezemolo had called “taxi car racing”. Rosberg HAS to win this time.

* Toto Wolff has moved swiftly to defuse any ‘afters’ from Shanghai:  “We saw tensions between Nico and Lewis in the race and we tackled them directly on Sunday night to stop anything carrying over to this weekend. When you have intense competition, it's normal that it causes emotions to run high – and that's not something we want to change. We maintain our philosophy of letting the drivers race – but they both know that the number one priority for the team is to win for Mercedes-Benz.”

* The weather this weekend will be “Scorchio” – 34C on Friday and down to 28C on Saturday and Sunday. Sun all weekend. In the evenings, the temperature is likely to dip to around 24-25C, but the most important thing is that the track temperature will be cooler thanks to a lack of radiant sun.

* Of the ten races in Bahrain, only four have been won from pole. Jenson Button, Fernando Alonso and Felipe Massa are the only drivers to have started every Bahrain Grand Prix since 2004. Jenson has won the race, but he also got a podium once with BAR-Honda.

* Felipe Massa has won the race twice and Williams’ head of vehicle performance Rob Smedley thinks the Brazilian is driving as well as he did in 2008. The problem this weekend will be engineering the car through rapid track evolution, as Rob explains “The circuit is fantastic with very high traction demand making it tough for the engineers to ensure the car is good in qualifying, but looks after its rear tyres in race conditions. The importance of controlling the temperatures in the rears is paramount.”

* Daniel Ricciardo likes the look of the karting track attached to the Sakhir circuit.  “There’s a really good go-kart track next to the circuit. Last year after testing you could go down there and hang out with the guys working at the track and do a few laps – obviously in your race overalls and helmet trying to look as cool as possible.”

* Pirelli have confirmed that it will be Soft and Medium again in Bahrain. Paul Hembery is not expecting the punishing tyre degradation of Sepang, though. “With the race taking place in the evening, conditions won't be as aggressive as they were in Malaysia – or even Bahrain two years ago, when the race was still run during the day.”

* The lap record of 1m 31.447 was set in 2005 by a stand-in McLaren driver. Two points if you can guess who it was, who was missing from the McLaren team and why he was missing… (see below)

* McLaren’s Mr Positive: “For me, China was a significant step forward for us and particularly for me as it’s the longest race distance I have done so far!. I had a lot of fun out there and our performance in the final stint was very positive.”  Yes, that’s Fernando.
And McLaren’s Mr Not-so-Positive: “China was a tricky race for us although we did see a lot of positives. There’s been a definite step forward at each race so far, although sadly this didn’t translate into the gains on track that we’d hoped for during the race, so we’re busy working out the reasons for that.” Yes, that’s the ginger whinger.

* Lotus’s Alan Permayne believes that they have the fourth fastest car and providing they can keep Pastor Maldonado on the right sections of black stuff, they should keep hold of 7th and 8th positions. Pastor has been hit by other cars while minding his own business in the first three races of 2015 – surely that won’t continue…
Answer: Pedro de la Rosa was substituting for the absent Juan Montoya who had supposedly hurt his arm in a “tennis accident”. Although many in the pitlane believed he must have been playing tennis from some kind of motorised vehicle…