Home Uncategorized Battle At The Front, Dreams At The Back 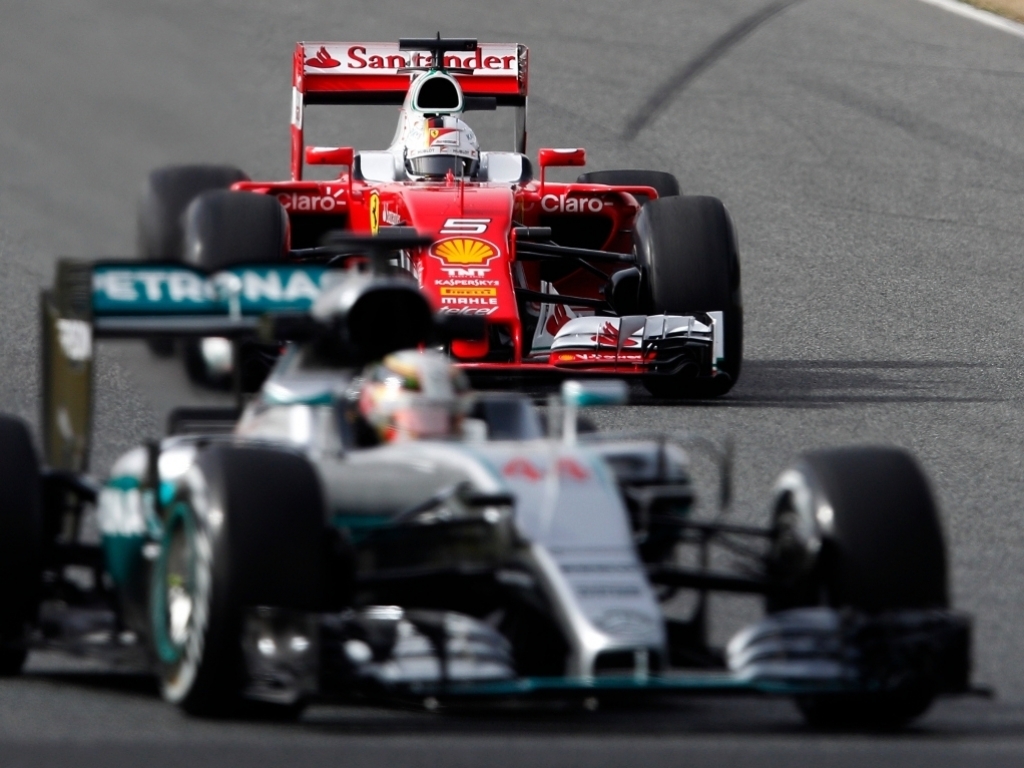 There are new cars, tyres, qualifying and faces and yet many fear it could be the same old story this season in Formula 1 although Ferrari’s pace in testing suggests otherwise.

After months of silence the sound of V6 engines – marginally louder this year as a result of two exhaust pipes being used instead of one – tore through the air in Spain as pre-season testing took place. By no means a true indicator of what lies ahead, it hinted at the bigger picture with Mercedes and Ferrari emerging as the teams to beat and Red Bull, Williams and Force India looking set for a fierce battle behind them.

But with Mercedes refusing to trial Pirelli’s new ultra-soft rubber many declared the reigning World Champions to be sandbagging, a concern amongst their rivals because if Mercedes have pure pace to go with that incredible reliability, they could be unstoppable.

Lewis Hamilton arrives in Melbourne for the Oz GP

Formula 1, though, is doing all it can to at least slow Lewis Hamilton’s charge to a fourth World title.

F1 bosses have given the green light to a new qualifying format which will see the slowest driver eliminated at set intervals during each of the three segments. Some are using the word ‘exciting’, others are going with ‘chaos’. Either way it is hoped that it will shake up the grid and put an end to Bernie Ecclestone touting the idea of reserved grids.

However it is not just Saturday’s that the sport is looking to vamp up, Sunday races could also be made a tad more unpredictable by the introduction of three tyre compounds. Drivers will have to use two specific sets – the hardest two – during the race and the softest if they make it into Q3 but otherwise the remaining 10 sets are their own choice as are the numbers of each.

It is hoped that this will lead to varying strategies not only amongst the teams but also their drivers. Interestingly, Nico Rosberg, Sebastian Vettel and Kimi Raikkonen all chose the exact same tyres for the season-opening Australian GP while reigning champ Hamilton has gone a different route and sacrificed a medium compound for a soft.

Last year the Brit racer ran away with pole position in Melbourne, taking it by six-tenths over his team-mate. Rosberg fought back during the 58-lap race to finish just a second behind. They easily dropped their rivals with third-placed Vettel 30 seconds down the road while the Mercedes duo lapped everyone up to and including sixth placed Daniel Ricciardo.

This year Formula 1 powers-that-be have done all they can to avoid a repeat by playing with the sporting regulations, now it is up to Mercedes’ rivals to do their part with the cars.

All the attention, though, won’t be on the front of the pack as Formula 1 waits with bated breath to see if McLaren and Honda have made any inroads over the winter. The team has shown signs of promise, the promise to finish grands prix, but where they will be when the chequered flags is uncertain. That same uncertainty surrounds Haas. The sport’s newest team may have had the best pre-season of any team since Toyota but reliability niggles meant less laps than they had wanted.

A battle royal at the front and dreams of progress at the back; here’s hoping both come true in Melbourne.

Our editors have worked alongside Betsafe to create their betting preview ahead of this weekend’s Australian Grand Prix, which is well worth a read for any potential punters.